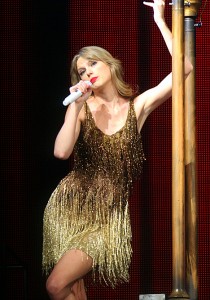 Six years ago, the then-17-year-old, then-country singer Taylor Swift burst onto our radios and through our eardrums with her debut single ‘Our Song’. Back then, she was a break-through sensation, applauded by the music industry for almost single-handedly bringing country music (and perms) back into the mainstream. She leapt onto the Billboard Hot 100, shooting to the top of the Hot Country Songs chart, and stayed there for 36 weeks. Critics compared her to Hilary Duff, as well as Faith Hill and Cindy Thomson (whoever the last two are).

How times have changed. Nowadays, she’s cut a fringe, straightened her hair, and though her country roots are just about visible, they’re rapidly disappearing under the dubsteppy, dance-infused mish-mash she’s been spewing out lately. Regardless of whether you think ‘Our Song’ is nothing but three and a half minutes of unrelenting, clichéd drivel delivered by way of a nasal whine and some E minor chords, it pales on the irritating scale in comparison to her latest offerings: ‘We Are Never Ever Getting Back Together’ and ‘Knew You Were Trouble’.

To be fair, I can see why a style transformation might be necessary for Taylor. She’s 23, and, like other teen sensations before her, is now under pressure to show the world that she has grown up – physically, mentally and musically. Problem: she hasn’t. Not only do her jeering new singles reflect an even more immature and disagreeable mindset, but her recent behaviour at the Grammy’s – appearing to impersonate Harry Styles during her performance of ‘Never Ever Getting Back Together’ – leaves something to be desired.

In the last few years, and particularly the last few months, Swift’s appeal has seemed to be swiftly decreasing. I mean this in terms of media personality, not record sales. At the start of her career, Taylor’s name-dropping and digs helped to shape her image as a vulnerable America’s Sweetheart – arguably, her 27-second break-up phone call with Joe Jonas was what really catapulted her into the spotlight. But where she was once considered cute and admired for her honesty, she’s now seen as attention-seeking, bitter, and, dare I say it, rather pathetic. NB: targeting Styles, the current darling of her tweeniverse fanbase, was not a wise move.

At the end of the day, my advice to Taylor is this: it’s never ever ever too late to stop acting like you’re 15. Like, ever. Ditch the bitching, the snitching and the auto-pitching, and consider writing a song called ‘Maybe I’m The Problem’. Then I’ll believe you’ve grown up.