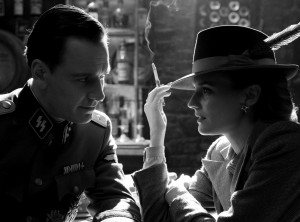 It is a truism of genre films that they can’t be held to a standard of fidelity to real life. They rely not on the real world for meaning, but on other films. So it is with the loosely thematic genres of Quentin Tarantino. They have always had a recognisable sensibility: a common thread of revenge, popular culture references and a casually aesthetic inclination towards violence that are at once implicitly his, and recognizable in many of his forebears. But while his films, from Jackie Brown with its overtures of blaxploitation, to Kill Bill’s martial arts fanboy-ism, have always sought to incorporate the many elements of their diverse genres, a common criticism is that they are simply un-real, a condemnation which is stating both the obvious and the irrelevant in regards to Tarantino’s excursions into history, first with 2009’s Inglourious Basterds and now with the Western slavery mash-up Django Unchained.

Common to Basterds and Django is the reliance on historical truths for narrative brevity. Tarantino’s lens doesn’t turn towards the atrocities (of slavery and the holocaust respectively), except on a personal scale. They lurk in the background, motivating the protagonists, be they a Jewish team reminiscent of the Dirty Dozen, or an African-American appropriation of Clint Eastwood’s lone gunman archetype, until an ultimate, brutal explosion of violence at the film’s climax.

The pertinent thing to note, and a nuance that passes critics of the ‘violent nonsense’ school of criticism by, is that this isn’t restorative or redemptive violence – rather, it’s vengeful and it’s cinematic, relying as much on the viewer’s knowledge that it isn’t real as in its own storytelling. Tarantino winks at the audience in his references; he debunks the racist epic Birth of a Nation in the slapstick ride of the Ku-Klux-Klan, he appropriates a scene from his own Kill Bill in the final shoot-out. He indicates that, as a film, the meaning is made from other films.

Basterds does much the same, most notably in the Riefenstahl-esque Pride of the Nation, in which a dying soldier lets out a scream that will sound familiar to discerning viewers – it is the ‘Wilhelm scream’, a stock sound sample peppered throughout modern film, including Star Wars, Indiana Jones and many of Tarantino’s own. That it would be incongruously inserted in an otherwise convincing riff on a Nazi propaganda film speaks volumes about Tarantino – he intends to make films that exist in the realm of film, and not in a reality removed from the cinema.

As such, Django Unchained is in keeping with both the tradition of Spaghetti Westerns past and of Tarantino’s own body of work, and indeed that of all films. Those criticising it for historical inaccuracy might as well chastise a cat for being a poor bartender – to expect a solemn procession of antebellum slavery is to misunderstand Brand Tarantino. From Reservoir Dogs to his latest offering, Tarantino’s films have spliced together the residual memory of every film which influences him, and the work that emerges from this is indebted to the art form itself.