At the end of a Chippendale back street, behind the Central Park development site and past rows of yet to be renovated terraces, an old Rolls Royce showroom has been radically reinvented. Four spacious floors of high-ceilinged white walls and exposed brick create an appropriately modern look. Founded in 2009 by Kerr and Judith Neilson, White Rabbit has since become one of the largest and most significant collections of contemporary Chinese art in the world.

On now is the “Smash Palace” show, featuring works with distinctly political overtones, engaged in critiquing One Party rule. What makes the artists’ political messages all the more fascinating is the variety of media and styles used to express them. From the bizarre to the beautiful, if there is one thing you can expect from a show at the White Rabbit, it’s that the art will be thoroughly compelling.

A case in point is Tu Pei-Shih’s video Adventures in Mount Yu (2010). On entering the projection room, we are lulled into false expectations by the cheerily green Astroturf carpeting, the video’s picture-book title and its brightly collaged opening scenes of playing children. Watch the video for a few seconds longer, however, and scenes of rape, hangings and murder are vividly played out, as we are confronted by the brutal reality of China’s control over Taiwan.

While Adventures in Mount Yu examines China’s political past other works focus on the present. In Even in Fear (2008) Zhou Xiaohu explores the tension between China’s increasing power and the social anxieties the come with such expansion. This is ingeniously represented as a giant rubber balloon that steadily swells to an enormous size. How much bigger can it get? Will it burst? As it starts to push against the ceiling, our instincts are to cover our ears and take an apprehensive step backwards.

Two of the most intriguing works are a pair of unnervingly similar dystopian visions of China’s future. Both Zhou Jie’s CBD (2010) and Cheng Dapeng’s Wonderful City (2011) speculate about the danger of the country’s rapid urban development spinning out of control. CBD presents a porcelain model of Beijing’s business district covered in fungus-like growths, as if the very city is spreading like a virus. In Wonderful City, 3D resin prints portray human and animal forms merging with urban structures in a nightmarish landscape of alien hybridity.

If you manage to tear yourself away from the works, don’t miss sampling the dumplings at the teashop downstairs – though White Rabbit is well worth visiting for the art alone. What’s more, entry and guided tours are free.

This is the quality of contemporary art you expect to see at a Biennale, but often don’t. Even if you think modern art isn’t your thing, don’t let disappointing shows elsewhere put you off visiting “Smash Palace” at the White Rabbit – it will undoubtedly leave your opinions in need of reconsideration. 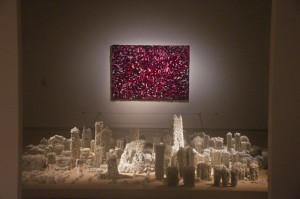 The gallery is located at 30 Balfour St, Chippendale, and is open from Thursday to Sunday, between 10am and 6pm.