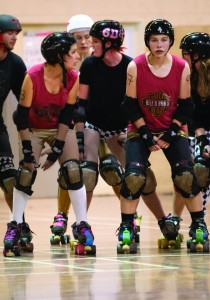 If you had asked me a year ago, I would have said that roller derby wasn’t my thing. It wasn’t the aggressive nature of the sport that turned me off, nor the high risk of injury. It’s just that I’m obviously not cool enough to be a sassy, confident ‘derby girl’. Derby is a real spectator sport, with the players expected to put on a show in more ways than one. It requires you to dress up, to dance, to stir up the crowd and to be a personality, not just a player.

This, more or less, was why I felt like I was going to hurl all over my skates approximately one hour before the debut bout of the University of Sydney Roller Derby League last Sunday. I was sitting in the change room of the Sydney Boys High gym, and all around me, the other USRDL skaters were putting tape on kneepads (to spare the floor from scratches), tightening their helmet straps, and applying outrageous make-up, face paint and body glitter.

Not one for accessorizing, I was make-up and glitter free, feeling particularly awkward in my flashy ‘boutfit’ of black leggings, gold hot pants and a red T-shirt that I had remodeled into a singlet. My derby name, ‘Binya Bruiser’, was emblazoned across my back, but I did not feel tough. As we exited the change room and began to warm up, my legs were literally shaking. It was all I could do to not fall over as I skated around the track with my team, a familiar lap that I had done at training hundreds of times.

The warm up went quickly, we retreated to the bench, and then a whistle was blown, signalling that it was time to get on the track. Holy fuck. We awkwardly shuffled into position and hunkered down into derby stance, knees bent, hands lightly touching the hips of the person next to us, and waited.

Anybody who has watched a bit of roller derby will know it is a tremendously confusing game. The basic concept is simple enough — one person from each team, the ‘jammer’, is tasked with lapping the other team, and are awarded points for each player they pass. However, a thick book of rules, and more officials than players, who perform complex whistle patterns and bizarre hand signals ensure the game can only be accurately followed by the most knowledgeable of spectators.

Confession time: I don’t know the rules of roller derby. I don’t know what any of the whistles or hand signals mean. I have never even skimmed the rule book. I have such an insufficient knowledge of derby that, in all honesty, I probably shouldn’t have been allowed onto the track. I was sent to ‘The Box’ three times (a fairly normal occurrence in derby) and each time had absolutely no idea what I had done wrong.

But this didn’t stop me from having fun, and as time went on, my pre-game nausea became a distant memory. I may find the flamboyant nature of derby petrifying, but it makes for an amazing atmosphere. The crowd whooped and cheered at big hits, bad falls, and the jammers streaking through the pack of players. I suspect that the crowd, like me, had little idea of what was going on, but, also like me, had a wonderful time. Far from feeling awkward or self-conscious, I was revelling in the buzz, feeling like I was one of the players who I had been starstruck by less than a year ago.
When the game drew to an end, each team celebrated individually— for about two seconds. Then we came together in a mess of sweat and glitter, and sheer derby joy at having successfully played our first bout.

The USRDL players are a strange bunch of queers, misfits, feminists, jocks and others; a mixture of body types and body shapes and dyed hair and genders and degrees and piercings and fresh faces and attitude and shyness. We are possibly the most motley crew on campus. We are also possibly the most friendly.

We all started playing derby for different reasons, but the justification behind our continued commitment is much more unified: we just love it. There’s a scene in Whip It, the film that introduced many of us to roller derby, in which Ellen Page tries to explain to her parents how incredibly important derby is to her. When I first saw the film, the scene felt a little over the top. It seemed contrived and unrealistic that anybody could actually love a sport that much. But now I get it. After that first bout, the entirety of USRDL gets it. In fact, we could not agree more.