5537 students turned out to vote, an increase of 663 students from last year. The final booth closed at 7:30pm, accompanied with the traditional countdown, cheers and joyous abandoning of how-to-votes (except for the Grassroots campaigners, who, presumably, recycled). The campaign teams, wet and freezing from hours of chasing votes in the rain, headed to Hermann’s for the election party and announcement of results.

Few people were surprised when Tara Waniganayaka was the only candidate to break quota and be elected to Board on the first count with a massive 907 votes. The next few counts saw a number of candidates excluded before Robby Magyar reached quota and became the second person elected to Board. Bebe D’Souza and Tim Matthews were elected in the twelfth count, and Eve Radunz took out the fifth Board spot in the fourteenth count. The sixth and most unexpected victor of the night was undoubtedly Kade Denton, who pulled off a victory against strong Sydney Labor Students contender Jeremy Elphick to take the final place on Board.

Preference deals did not play a big role in this year’s election, as the six elected candidates were the top six in primary votes as well. Bebe D’Souza was the beneficiary of a large number of preferences from Patrick Ward and Jeremy Elphick which took her from sixth place in primaries to the third elected candidate overall. As Waniganayaka, D’Souza and Radunz were all elected into the top six, the USU’s affirmative action provisions were not invoked this year. 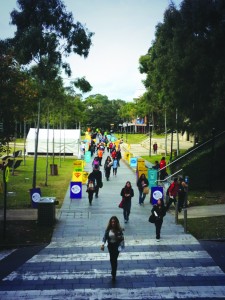 By far the most memorable aspect of this particular Board election was the sheer number of candidates. The number fell from 16 to 15 early in the election process when Josh Crawford dropped off the radar, and fell again on May 16, the first day of pre-polling, when Kanika Batra pulled out of the race due to ill health. On Election Day, Batra campaigned for William Dawes. “I thought that since I couldn’t continue my own campaign it would be good to help out someone I like and would be happy to see on board,” she said. Batra confirmed that her $500 grant was intact, other than the money spent on 25 campaign shirts, and that it would be returned to the USU.

The ongoing controversy about the joint ‘Will & Grace’ campaign was another constant theme in the 2013 Board election. As reported in Honi Soit last week, a complaint was made against their joint campaign strategy, which was rejected by the Returning Officer. It was then appealed and taken to the Electoral Arbiter, law lecturer Penelope Crossley. Crossley found that the complaints made against Will and Grace’s campaign had no basis in the USU’s Constitution, regulations, Candidate Handbook or Grant Recipient Agreement. She also found that the complaint pertaining to a potential breach of the spending cap lacked the evidence to back it up. Crossley emphasized her lack of discretion in these matters when she spoke to Honi Soit, saying that her role was to make a decision based on existing rules and regulations, and that in her view, none of them had been broken.

Considering that neither Will nor Grace was elected to Board, it’s safe to say that at least this time around, the joint campaign was not a winning strategy. However, Crossley said that in her post-election recommendations she has suggested that the USU’s Electoral Committee discuss the issue of joint campaigns and how they ought to be dealt with in the future.

Now that the fresh intake of Board directors has been determined, the speculation about who is likely to become the next USU President has intensified, with Hannah Morris and John Harding-Easson the two major contenders for this position. For more information on the Presidential race, see Unigate.