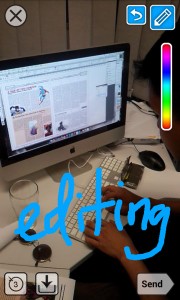 Last week, my attempt to persuade a Nokia Brick-owning friend to get into the frame of an iPhone selfie led to a conversation culminating in her unapologetic claim that “I’m so glad I don’t have one of those internet witchcraft phones.” My plan, fully disclosed, had been to photograph the two of us pulling faces, decorate the snap with multi-coloured turds, and send it to some of the other Honi editors as a symbol of affection.

Thanks to Snapchat, this is what I have become.

Snapchat has been around since late 2011, but the last few months have seen the smartphone application’s popularity bolster as hordes of social media junkies migrate to this medium. Snapchat allows you to send pictures or videos to other users that last up to ten seconds, and features a free-drawing tool and palette, enabling the embellishment of photos with whichever type of coloured turd (or other finger-drawn object) the user pleases. Suffice to say, this inventive addition to the pockets of (predominantly) under-30s deserves its hype.

But why is it so popular? Camera phones and picture messaging have been around for years, allowing us to connect visually with fellow mobile phone users. Indeed, the time sensitivity of the pictures that, amongst other things, makes it perfect for risky things like sexting, is at the core of its popularity.

Like short drive-by glances at fleeting roadside quirks (think: car accidents, loud hairstyles, your ex’s house), complete momentary engrossment in a snap to which your inbox is privy results in more importance given to photos given their imminent self-destruction. To contrast, think of the last time you made a mental note to re-visit a photo on Facebook, Tumblr, or Twitter, secure with the knowledge of its probable virtual permanency. Just like other things in life, we want what we can’t have (or in this case, what we can’t have for very long, or ever again), which makes snaps that much more desirable and intriguing.

The odious Facebook photo over-sharer unwittingly has a comrade in Snapchat, as do that person’s ‘friends’. We can only hope that as Snapchat’s charm becomes increasingly pertinent, streams of consciousness and voyeurism bypass oft-clogged news feeds in favour of self-destructing image snippets that demand your undivided attention for ten seconds (often less). Being tugged at the pant-leg by the technology to which we are at beck and call is a feature of life that’s here to stay, so we may as well embrace it.

Snapchat is perfect for connecting with others; its short pictorial bursts forge connections between two or more parties whose uniqueness can’t be recreated – and this is the appeal. After all, it’s better to burn out than to fade away.