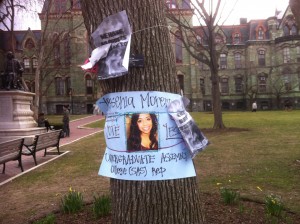 Is it possible for student elections to occur and to not be aware of their existence? I was halfway through the voting period at the University of Pennsylvania student elections before I even noticed any identifiable form of campaigning. For someone who has been exposed to the overwhelming glitz and glamour of USYD, this was a pleasant surprise.

At the UPenn, the councilor and executive positions for the Undergraduate Assembly (similar to the SRC) are contested annually in what could charitably be described as an invisible election, at least relative to the University of Sydney. The elections occur online, meaning there’s no need for physical campaigners. The tiny spending cap means that the most candidates do to get their name out is tying hand-drawn posters with string to trees; there’s no chalking, brightly coloured t-shirts, or pamphlets produced en masse.

Stan Ma, one of the board directors of the Student Activities Council, (an organisation loosely equivalent to the USU) believes this to be an overwhelmingly good thing. He believes that the richest students easily have the financial resources to spend extravagantly, and could even be “buying billboards all over Philadelphia” if unchecked by regulations.

That’s not to say that there’s no element of strategic politics involved. Gabriel Delaney, the recently elected Vice President of the Undergraduate Assembly believes that electoral success comes down to “endorsement emails of clubs and societies”. When I first interviewed him he was between confirming that the International Affairs Society was endorsing him, and setting up a meeting with the President-Elect of the Canadian Society to seek their support. As Delaney explains, when voter turnout is only in the few thousands, the impact of a society of about a hundred students can be the tipping point.

The final interesting factor of UPenn elections is the total absence of partisan ideology. There are no factions, drawn from Republican or Democratic clubs on campus. Such student organisations focus on state and national politics but, come election time, partisan politics are nowhere to be seen, nor ‘Independents’ who define themselves by opposition. This lack of factions means there is a general absence of campaigners beyond the candidature themselves to bother with elections.

Consequently, elections at UPenn are not a half-yearly event to be dreaded by the student population but an annual oddity where students, free from harassment and empty promises, gladly vote for their representatives.