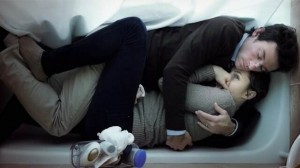 Of all the films that screened at the Sydney Film Festival, you’d be hard pressed to find one as confounding as Shane Carruth’s Upstream Color. Emotionally draining, abstract and visually stunning, Upstream Color is also an astounding achievement from Carruth, who directs and stars, but also composed the soaring, mythic score, wrote the screenplay and produced it.

Kris (the fantastic Amy Seimetz) is robbed and drugged by a thief. It’s not an overtly physical assault, but a damaging psychological one. Troubled, she finds solace in Jeff (Carruth). Each of them has been unwittingly caught up in the devastating life-cycle of a disease/organism. If this sounds ambiguous, it’s because it is. The film departs from empirical reality early on, intercutting the interactions of Kris and Jeff with allegorical motifs of pigs and of maggots, saturated and ethereal colours, and bursts of light and sound.

This sensoriall density of Upstream Color feels very similar to Terrence Malick’s Tree of Life. Where Malick was dealing with life on a huge scale, Carruth is concerned with the microcosmic. Teeming biology is presented side-by-side with the wider narrative of Kris and Jeff’s attempts to construct a meaningful existence in their fogged reality. Their relationship, and their shared trauma, underpins the film, which confounds easy categorisation, holding elements of, but never really embracing, science-fiction, romance and thriller.

That the film was birthed from a singular mind is evident – though elusive, each aspect of the film complements the other superbly. Upstream Color is a rare, and paradoxical, example of a film that makes complete sense in of itself, but is impossible to summate – it doesn’t seem like it should be coherent, but somehow it is.

The meaning of Upstream Color will evade you if you go grasping for it. This is not a mystery that offers itself up for solving, but one that washes over you. As a production achievement alone it deserves plaudits, but as a spiritual filmic experience, it is unmissable.

Upstream Colour is released in Australian cinemas on August 22.

For more of Honi’s coverage of the Sydney Film Festival see: