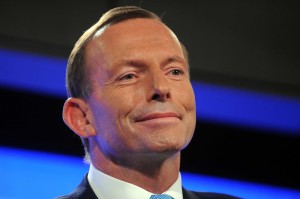 It was with utter elation and raw unfiltered emotion that Tony Abbott was presented with the news of Labor’s turnaround in asylum seeker policy under Prime Minister Rudd this week. The policy turnaround was brought to Abbott’s attention by a member of the press corps during one of his many recent in-depth policy discussions at the National Press Club, for which he has gained the nickname “Tell All Tony”. In an unorthodox move by the opposition leader, Abbott opted to comment directly on the change, despite not having undergone party briefing on talking points, given that this topic was so close to the heart for the renowned human rights campaigner.

“I just want to sincerely thank Labor for finally coming to the table on this issue” said Abbott, his voice breaking as he spoke. “For too long this issue has been treated so inhumanely by all sides of politics. What we often forget is that these are real people with lives and loved ones, who are needlessly dying at sea.” Abbott then took a moment to compose himself and wipe away tears before carrying on. “This is not just a political issue, it is an issue for me personally. This is why the Liberal Party has made “Stop the Unnecessary Deaths at Sea” the keystone of our policy platform for the upcoming election. Because we simply could not stand by and let this suffering continue unabated.” Abbott also made plain his feelings towards those who would seek to use such a policy to attract votes on a xenophobic platform. “To those who would vote for this policy simply for fear of immigration I repeat what I have always said, I do not nor have I ever wanted your vote. I would sooner see such people deported to a wartorn country and replaced with an asylum seeker who appreciates what we have in this country, than accept the vote of such narrow minded xenophobes.”

Having campaigned entirely on a platform of preventing the “boats”, a word that has become synonymous in the public mind with the phrase “unnecessary drownings at sea by people who are fleeing the most abysmal conditions in their homelands”, Abbott now claims to be unconcerned about his election prospects. “It doesn’t matter if we win or lose now,” he announced with pride, barely holding back another torrent of tears, “All that matters is that we can be sure that these poor people are now a little bit safer as a result of this cross party initiative. Finally this issue can stop being treated as a game for politicians with aspirations of power.”

Having become renowned for his outright shows of emotion, the press gallery was unsurprised to see Abbott’s latest outpouring over an issue that has been long fought and hard won for him. Rumours are even circling of a potential resignation by Abbott following this momentous victory, though many have indicated their wish for him to stay on and champion further human rights issues on a national scale. No comment has yet been released by the Liberal National Party office, although the UNHCR has confirmed that Abbott has accepted a position on its board, which was offered in response to Abbott’s legendary personal donations to the organisation, which are rumoured to now tally in the order of hundreds of thousands of dollars.

Despite all this Abbott is still not without his detractors from the fringes of politics. Some have called into question his sincerity on this issue, particularly former Greens leader and fellow Sydney Uni alumnus Bob Brown. In retort Abbott has said he is “personally offended” by these allegations of insincerity and cited his long and arduous battles for the rights of women and gays as proof that his Stop the Boats campaign is a true humanitarian concern of his. “Unlike Bob,” countered Tony, “I have spent my life, all the way back to my formative days at Sydney Uni, campaigning for equal rights for women, LGBT people and those people he so callously refers to as ‘illegal immigrants’.”

This victory is expected to heal some wounds that had emerged between the country’s two largest political parties after the removal of the first female Prime Minister Julia Gillard by the Labor party, a move which is said to have enraged Abbott, who was a good friend and admirer of Gillard’s tenacity during times of great hostility from the public. However, following the turnaround on asylum seeker policy, Abbott is now pegged to begin a new period of cooperation with Labor, given a newly stated commitment to work with all parties to ensure the best legislation possible for our country.