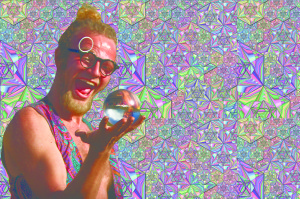 Sniffer dogs have detected drugs on Ben* as he entered a music festival on four separate occasions. As he was led away to be searched, Ben’s mind turned not only to the criminal penalties he faced, but whether in the last few minutes he had thrown away his medical career.

This year, like others, the sniffer dogs were hard at work at Splendour in the Grass. “There were dogs there every day except Sunday” reported second year law student Toby,* who took MDMA as he entered the festival. Over the four days of Splendour, 282 people were caught with illegal drugs, mainly marijuana and MDMA.

Ben, a forth year medical student, has brought marijuana and ecstasy into Splendour over the four years that he’s attended. “My tactic is generally something of the boot or shoe variety” he revealed to Honi Soit.  Despite being picked up by sniffer dogs multiple times, he has managed the impressive feat of never being being part of the possession statistics at Splendour.

“I think they’re trying to catch a certain kind of person,” he explained. “My personal trick is to start a conversation about how I’m a medical student to show that I’m a well-educated and well-versed young man. It gets them to let their guard down. It’s really just using the communication skills they teach us in med school.”

The police, he says are generally “incredibly friendly, particularly at Splendour”. Once identified by the dogs, the police directed Ben to a separate tent and asked him to remove his outer clothes and shoes so they could search him. According to Ben, the pat down “pretty much does nothing. It’s just the upper torso and legs. I think that’s why it’s important to be amiable. If I was freaking out, I don’t think I’d have been so lucky.”

The stats from Splendour seem to indicate that Ben’s story isn’t the norm; around 70% of the sniffer dog detections at Splendour this year resulted in a possession finding.

The time Ben tried to bring “a decent amount” of MDMA to Harvest Festival was one of the less lucky times. “I had smoked weed before going in so I think that’s what they pulled me over for. I wrapped [the MDMA] in chewing gum and put it at the back of my mouth. But when the dogs pulled me over I swallowed it and nearly overdosed.“

The snap decision to swallow the drugs rather than risk being caught might make sense given the damage a high-level drugs charge could do to Ben’s career. Doctors, lawyers, and to a lesser extent teachers, need to declare criminal charges and convictions when seeking registration or admission by their professional bodies.  “With the ecstasy, that one could have been quite serious. I wouldn’t do that again. Nor the MDMA,” said Ben “But in NSW for marijuana if you’ve got a small amount you just get a caution. There’s a fair amount of police discretion. They might not even bother properly taking down your details onto the official list. I think that’s where it’s important to be nice and amiable.”

Toby’s friend and fellow law student Rachael* took eight pills and caps into the Splendour campsite, but isn’t too worried.

“I just don’t understand how they can search 30 000 people effectively,” she explained. She’s also willing to run the risk of being charged: “The definition for trafficable is very low, but I think it’s unlikely you’d be charged with trafficable quantities. A possession charge is not that serious.”

Rachael is quite open about her preference for MDMA over drinking at festivals. “It’s way more fun. It’s cheaper. I always feel more aware when I’m on drugs than when I’m blacking out with alcohol”. She also has some very practical concerns. “You don’t need to go to the bathroom as often. The toilets are disgusting and the queues are huge. And when the phones don’t work you’ll lose your friends Toby agrees: “the mid strength drinks make it really hard to get drunk. It’s like 0.8 [standard drinks] in a can of cider!”

Other students working towards professions that require criminal background checks aren’t as convinced. Frances* is a fourth year law student who went to Splendour this year but decided to not take drugs with her friends. “I work in criminal law, so I see where it’s gone wrong, all the time. And not just for major manufacturers but for people who brought in seven pills into a festival.” She finds it hard to believe some of the urban myths her law friends peddle about smuggling drugs into festivals. “Like if you’re tall dogs will never catch you. I would feel like a total idiot asking my boss to represent me” if that turned out to be wrong. She’s quick to clarify however that she doesn’t have any moral objection to people taking drugs- “It’s just really not worth it considering what I do.”

Ben does share some of Frances’ concern. “I am excited for my career and I wouldn’t want a childhood mistake to ruin it” he said. But for him, the risk is mostly worth it. “I’m not sure I’d want to have a job that disallowed me for a simple possession charge. I try not to take my life too seriously.”

*Names have been changed because drugs are illegal.

Update: This article originally stated that 70% of searches resulted in cautions or charges. Around 70% of people searched were found to be in possession of illegal substances. Most, but not all, went on to be cautioned or charged.