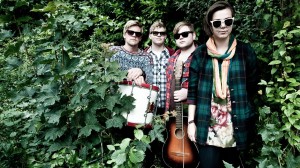 Probably the best way to summarise Of Monsters and Men’s music is to say that my 15 year-old sister and my mum really like them. They have two pretty catchy songs, ‘Little Talks’ and ‘Mountain Sound’; both are upbeat, feature trumpets, innocent boy/girl callbacks and joyful shouts of “Hey!”. They are fun, uncomplicated and sweet little songs that slot nicely into the Lumineers and Mumford and Son’s pop-folk revival.

As a band, they are a positively Nordic looking five-piece who have gotten the retro-homely look down to a science, but quite frankly, they probably can lay more claim to that look than some. They are from Iceland after all, and in some ways, that Scandinavian exoticism is their biggest drawcard.

During their recent Australian visit for Splendour in the Grass, I had the chance to ask them about Iceland, Australia, and how they just couldn’t wait to see Frank Ocean at the festival (bummer, guys).

In many ways, Australia and Iceland are each other’s evil twins: both are isolated island nations. But while Australia is famous for red earth, scorching heat, kangaroos and Steve Irwin, Iceland is known for volcanos, being fucking cold and Björk.

Reykjavik, they tell me, has a strong music scene despite being home to only about 120 000 people in a country with a total population a little less than Canberra. Rural Iceland, apparently, is “quiet and simple”, but the city is a different matter completely. “There’s usually an abundance of concerts you can choose from every weekend, but in fairness don’t expect the venue to be that good”, they warn. “The best bars and venues in Iceland are all disappearing to make way for hotels. That doesn›t stop the strong Icelandic music scene though.” When asked if they would ever relocate, they assured me that “Iceland will always be home” despite frequently commuting between Iceland and continental Denmark.

Unsurprisingly, they didn’t give much heed to the Australian ‘winter’. On this trip, Byron was their favorite, where they “stayed at a beautiful beach house, swam in the ocean and sunbathed”. Unsurprisingly, the 18°C highs and spitting rain that accompanied their time there did not deter them from jumping in the water and soaking up the sun. The weather in Byron was pretty much identical to what it was in Iceland at the same time, in the height of Reykjavik’s summer.

What was the biggest difference for them though? “Us Icelanders are not used to the kind of insects you guys have here”, which actually means something when they say it. Fun fact: Iceland is home to only 1,300 insects varieties, making it one of the least insect diverse territories on the planet beaten only by the Arctic, Greenland and parts of the Himalayas.

It sounds like they had a good trip. I just hope they weren’t too devastated about Frank Ocean.