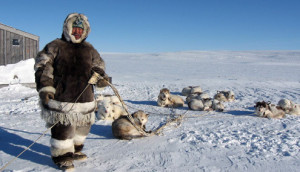 In an amazing turn of events that has stunned the sporting world and left many scratching their heads, this week it was announced that Greenland’s swimming team at the next Summer Olympics would be made up entirely of Eskimos, following the formation of a large swimming pool where the North Pole used to be.

The inclusion of the Greenlandian team will mark the first appearance of native Inuit people at the Summer games since an unfortunate miscommunication at the 1956 Olympics led to the harpooning of the entire Welsh diving team.

The move towards summer sports over their traditionally more successful winter endeavors is said to be just one part of a wider cultural shift by the Inuit peoples, away from their previously frosty image. According to Sven Itmults of Tourism Siberia, “When you talk about the Arctic and its Inuit inhabitants, people have this image in their mind of some kind of winter wonderland of snow, elves and man eating bears. We want to help people look past that stereotype and see the Arctic for what it really is, a splendid tropical getaway, where you can enjoy a relaxing holiday full of sun, sand and shrinking icecaps, the perfect escape from the face-melting heat of the tropics in the not-too-distant future.”

Despite their new sporting foray, all is not well for the Arctic state of Greenland, with regional neighbor Iceland filing suit in the International Court of Arbitration, claiming that the disappearance of glaciers in Greenland may be a breach of the Ironic and Misleading Names Treaty it had entered into with Iceland in the early 18th century. The suit is supported by a number of disgruntled Inuits who are upset about the rapid erosion of their native homeland. In the words of one defendant, “What the hell are we supposed to do now with 52 words for snow now?”

Disney is rumored to be in discussions with the Inuit swimming team to produce a mildly racist comedy adaptation of their Olympic bid, to be released in cinemas by 2016 or before the human race completely wipes itself off the face of the earth, whichever comes first.