Entering a large warehouse, a group of hipsters huddle in a circle around a glass case. Inside, two boxers punch and kick each other in robotic movements until their opponent stumbles and falls to the cheers of the spectators. This is not Fight Club and there are no rules.

Michaela Davies’s new performance piece ‘Game On’ was one of the most intriguing and challenging works featured at this year’s Underbelly Arts Festival on August 3rd and 4th. Over 100 artists came together within the spacious warehouses and industrial life of Cockatoo Island to create 30 exciting and visually exciting works of installation, performance and interactive art.

Moving closer to the circle you become aware that the boxers are not just acting robotically but are being controlled by electric muscle stimulation (EMS) via electrodes inserted into their upper arm muscles, allowing spectators to move a joystick to manipulate the fighter’s movements. Realising the strength of the electric shocks contracting and releasing their muscles, people begin questioning whether the fighters experience pain, who are reassured by Davies that the participants ‘voluntarily’ participate in the name of contemporary conceptual art. Wearing padded headgear and throwing pitiful punches, this is a weak and bloodless battle, and even slightly amusing.

Yet still it is unsettling. Michaela’s work urges us to consider the increasing reality of video game violence in the wake of school shootings and desensitisation. People are reluctant to take the controls to manipulate these very real, weakened people and to afflict punches on another. We hesitate to relate all such violence in our society to video games, as sitting on a couch for hours in a simulated world is hardly comparable to violence in real life. It is easy to become absorbed in the system of the game, the cheats and tricks and winning, disassociating oneself from quick-footed avatars. Human sensitivity is key in this work and is how Davies plays on our empathy, eliciting an amazed yet confused response.

In a default move of protection, the fighter’s arms cradle their heads in anticipation of the next move they can not block. Hitting twelve punches determines the winner before the cycle of the game begins again. The fighting is relentless, yet just like on a PlayStation we don’t have blood on our hands. After watching for several minutes I walk off to enjoy a warm apple cider, a form of entertainment I can not question. 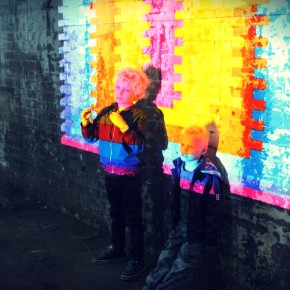 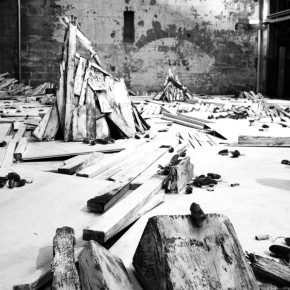 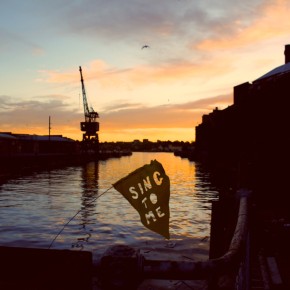 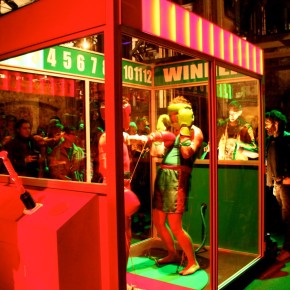 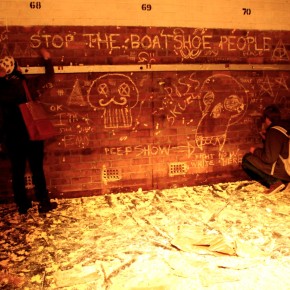 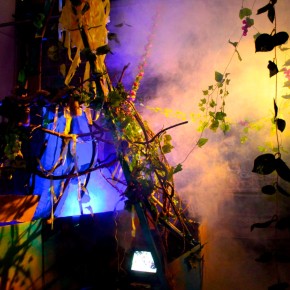