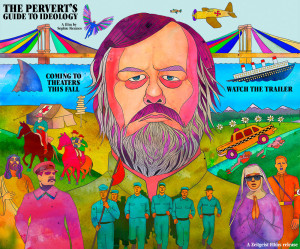 One of the more frustrating aspects of contemporary cinema is the gaping disconnect between film as theory and film as entertainment. If one were to draw a Venn diagram of the relationship between film studies as an intellectual practice and how the layperson watches film, we would have two circles.

This distance is exactly what makes The Pervert’s Guide to Ideology so refreshing. PGI, a sequel of sorts to 2006’s Pervert’s Guide to Cinema, is directed by Sophie Fiennes and stars Slovenian philosopher, cultural theorist and all-round Marxist agitator Slavoj Žižek. Žižek, the pop-culture philosophiser, is perfect for bridging the gap between theory and watchability, and PGI is heavily indebted to his mad-hattered energy.

The formula for PGI is simple in its audacity. Žižek is inserted into the fabric of whatever film he’s structuring his ramblings around – the film scenes themselves becomes a vehicle for his theories. What makes Žižek so entertaining, and ultimately what makes Pervert’s Guide work, is his unfettered enthusiasm for film, and for theory, an infectiousness that turns the sometimes heavy-handed pastiche from awkward to enlightening. The audacity of the formula is well suited to Žižek’s often provocatory theories.

This isn’t a documentary in the traditional sense – its goal isn’t to elucidate, but to engage. As it tears from one scene to another, with Žižek’s non-stop soliloquising the only segue, it can be hard to follow, and the constant recreations vary from gauche to spot-on. But where The Sound of Music and Titanic are tremendously shtick, Žižek’s energy carries the scenes, and the spectator along with it. It is form reflecting function – Žižek’s basic premise of ideology in cinema (“when we think we are escaping into our dreams – at that point, we are within ideology”) is played out in his enacting his dreams on screen.

The Pervert’s Guide to Ideology is plenty tacky and always abstract, which is precisely why it’s so much fun.

The Festival Wrap-Up, aka Seeing Films Non-Stop for 4 Days