The USYD branch of the National Tertiary Education Union (NTEU) has voted overwhelmingly to cancel its planned 72 hour strike and accept a new enterprise bargaining offer from the University at a members’ meeting of over 300 academic staff on Tuesday.

The NTEU’s decision potentially brings to an end almost 18 months of negotiations over a new enterprise bargaining agreement (EBA) between University staff and management.

The NTEU and CPSU (the general staff union) have fought a bitter enterprise bargaining campaign in 2013 that has included seven days of strike action.

In emails to staff and students, the University expressed that it was pleased to have “reached a mutually beneficial resolution with the NTEU.” 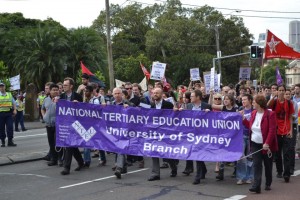 It is unclear whether the CPSU will also vote to endorse the University’s offer at its members’ meeting next Tuesday.

The University’s new offer includes a 14.5% pay increase over the duration of the  agreement, which would expire at the end of 2017. Management’s previous offer tabled an increase of 11.6%.

In addition to the increased wage offer, academic staff will receive a $540 sign-on bonus, an extra concessional day at the end of each year, and three research days per year.

Disputes over the new EBA have converged largely on pay increases in recent months, after the University yielded on attempts to increase casualisation and cut leave entitlements, amongst other modifications to staff conditions.

The NTEU’s endorsement of the new offer signals a significant shift in the Union’s attitude towards the pay dispute, given its recent rhetoric in demanding a 4% per annum pay increase. At 2.9% over five periods, the in-principle agreement still falls well short of this demand.

One staff member, who did not wish to be named, speculated that the NTEU’s cancellation of its 72 hour strike and acceptance of the new offer arose out of an acknowledgement that ongoing strike action was not sustainable, particularly in light of the CPSU’s decision to not involve itself in the canvassed three day strike.

In addition to the increased wage offer, academic staff will receive a $540 sign-on bonus, an extra concessional day at the end of each year, and three research days per year.

CPSU President Grant Wheeler told Honi Soit that the CPSU had had some discussions with the NTEU regarding its decision to sign the in-principle agreement, but emphasised that CPSU members would not necessarily follow the NTEU at next Tuesday’s meeting.

Wheeler expressed reservations that the University’s wage offer did not differ greatly from its previous offer of four (as opposed to five) separate 2.9% increases, given the additional 2.9% increase only covers a period of approximately six months.

The apparent discord between the two staff unions may lead to them signing separate agreements with the University, as occurred under the previous enterprise bargaining agreement.

Notwithstanding the eleventh hour disagreement over wage increases, both unions seem to agree that there have been important wins in negotiations over structural issues like casualisation.

“The ability to convert from casual to ongoing staff has been strengthened [under the current offer],” said Wheeler.

The NTEU is set to draft an EBA with the University in the coming weeks, with the expectation that the agreement will be signed by late October.