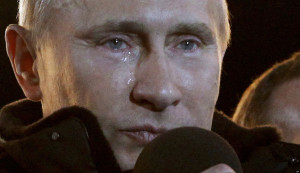 Russian leader and infamous anti-shirt advocate Vladimir Putin has been nominated for the Nobel Peace Prize, causing the Oxford University Press, the organisation responsible for the publishing of the Oxford English Dictionary, to redefine what the word “peace” officially means.

Putin’s nomination was put forward to the Nobel Prize committee by an advocacy group known as ‘The International Academy of Spiritual Unity and Cooperation of Peoples of the World’, a name whose ridiculousness is superseded only by its word count. The group had this to say on the matter:

“First of all, yes, that’s our real name. Why does everyone keep asking us that question?

“Secondly, we feel that Vladimir Putin is a pretty cool guy who always wants people to be at peace, especially if being at peace means doing what he tells them to. Even if they don’t want to listen to his really good advice on how to be not Gay, or how to send him more money, or how to be not Chechen, he still makes sure they are at peace. I mean, Death is peaceful, right?

“Lastly, we resent the idea that we are a fake organisation whose only purpose is to secure international awards for Russia and make Russia look better than everyone else. Of course we want world peace. Just look at our name”.

Upon hearing the news of the nomination, the Chief Executive of the Oxford University Press, released a statement to the media:

“‘A state or period in which there is no war, or a war has ended’,

“The new definition will now add to the end of that definition:

‘…excluding any wars in Chechnya or Georgia, any violent conflicts against Homosexuals, any wars which result from the supply of arms to the Middle East, and/or any political, ideological, military, or religious assassinations carried out in public or in private by members of any secret or public police force, military organisation, secret service, and or personally by any man named Vladimir Putin’.

“We feel that the change in definitions is necessary given the recent developments in the Nobel Prize community, as it is obvious to us that they are using a previously unheard-of definition of the word. We must adapt to the changing landscapes of society, and hopefully this modification helps us do that.”