At around midday today, Honi obtained an interesting campaign text that, according to certain complainants, might be a breach of electoral regulations.

“Hi, it’s Liam [Carrigan] from POWER for SRC and Georgia for President”, the text began, before directing students to voting booths. Where it gets interesting is the sign off, which included a plug for the SIN for Honi ticket. “While you’re there, make sure you also vote [1] SIN for Honi”, it read.

Honi was also able to confirm the text was sent from the phone number of Swetha Das, who is on the SIN ticket. 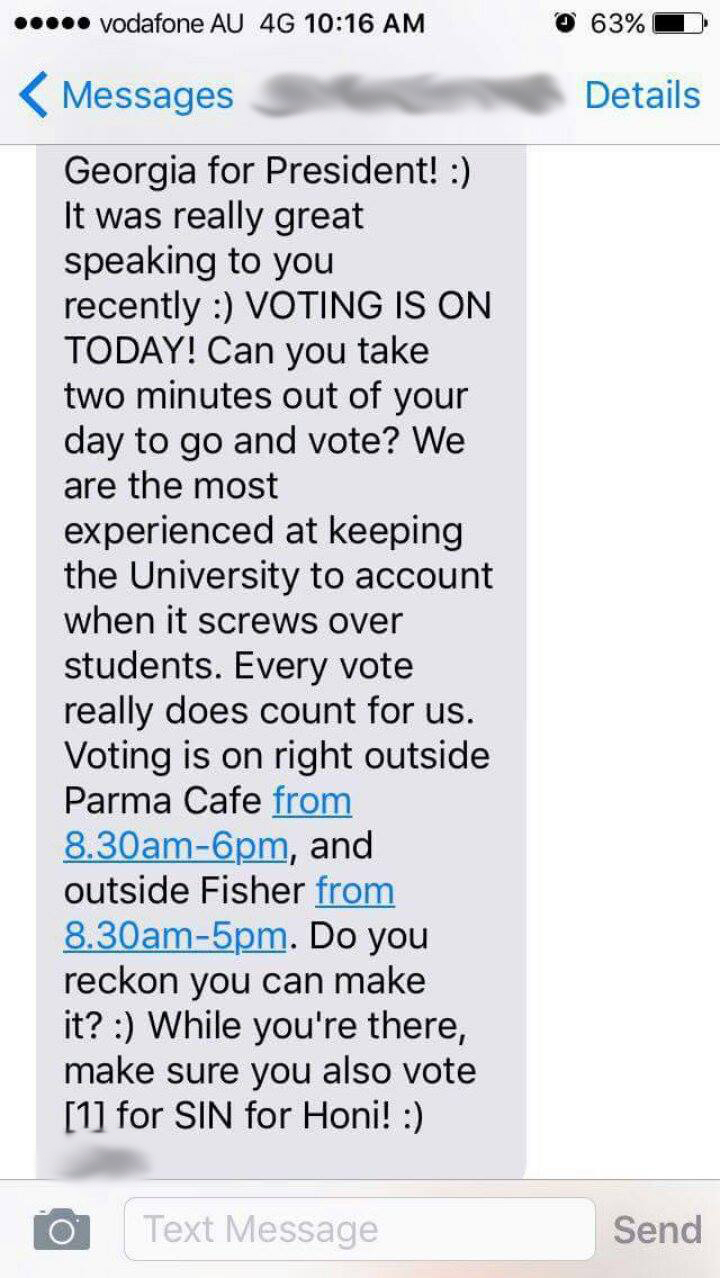 The legality of this move is a bit up in the air. According to guidelines handed out to last year’s campaigners, a candidate listed on the SRC council ballot (which Carrigan is), cannot “campaign, appear in digital material, blog, send emails or tweet etc…promoting a Honi Soit campaign or ticket”.

Carrigan confirmed the text had been sent by him, but denied it was a breach of regulations.

“I support SIN in a personal capacity”, he said. “It’s not against regs as it was one on one communication”.

“I have talked to Paulene [the Returning Officer] about it and she’s going to tell me her ruling tomorrow”.

Das directed us to fellow ticket member Daniel Ergas for comment from SIN.

“Liam C from POWER has been collecting phone numbers from keen voters in the past two weeks to remind people to vote. Because Swetha’s phone has unlimited texts, Liam sent about 10-15 from her phone number, also recommending they vote SIN.”

“We didn’t know the exact content, but as Liam and our ticket are close, we thought that he would encourage voters to support us too. As far as I am aware, this is allowable behaviour by the regulations as it is a private communication between Liam and a voter”, he said.

It’s now up to the Returning Officer to clarify what exactly has or hasn’t gone down here.

SALT IN THE DOGHOUSE

The uniquely aggressive campaigning of Socialist Alternative is a stupol mainstay, and it’s already drawing the fire of Returning Officer Paulene Graham.

Yet we’ve obtained an email from Graham to a SAlt bigwig that claims they’ve been digging to new lows.

“I have now had more than a dozen complaints about Omar [Hassan] and his overly aggressive campaigning style. This includes repeated personal comments made about the death of a candidate’s dog”, the email reads.

“This is Omar’s second formal warning, one more and he stops campaigning”

Honi understands that the dog in question was named Margie. Rest in peace and we hope awful hacks leave you alone. 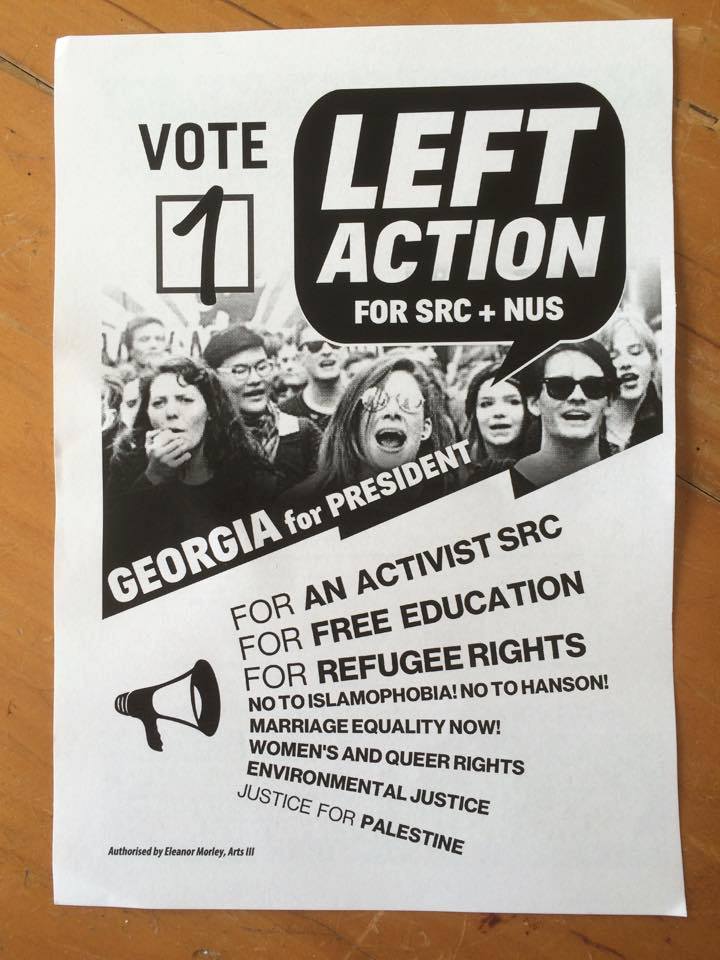 NLS member, and former USU Board candidate, Sam Kwon makes an appearance on this year’s Left Action (SAlt) how-to-votes. An odd inclusion, given Kwon is campaigning for opponents, Stand Up.

Kwon told Honi SAlt had not made contact with him to ask permission to use his image, however he didn’t mind. “They probably didn’t even know it was me,” he said.

A campaign video released by the Time for Honi appeared for only a few hours before it was deleted from the team’s Facebook page on Monday, for reasons why your humble correspondents are still unsure.

The video was a clunky slideshow of the team’s existing social media pictures, accompanied by an eerie rewrite of Gough Whitlam’s 1972 campaign song (“Engo, Meco, Law and Medicine, it’s time, yes it’s time, yes it’s time”) sung by what we think is the St Paul’s College Chapel Choir, but Time didn’t respond to our request for comment. Highlights include varying frame sizes throughout, and Michelle Picone’s authorisation jumping and flickering on screen at the vid’s conclusion.

It was since been replaced by a single shot video of ticket member Josh Wooller, encouraging supporters to tag a friend who is yet to “lose their (voting) virginity”. Maybe their ability to ruthlessly cut content just shows off their editing prowess?

I KNEW YOU WERE TROUBLE

Just when you thought all deals were signed, and this election season’s winner of “who fights Tories better” well and truly declared, Alex Fitton, everyone’s favourite long legged centre-right Liberal has thrown a spanner in the works.

As the Stand Up/Ignite team reveled in the Liberals’ apparent gesture support for Mantle, she herself was none too pleased. “There is absolutely no deal between the POWER coalition and the Liberals,” she said. Fitton confirmed this.

Why would centre-right Liberals preference a Presidential candidate who mentions marriage equality, safe schools, refugees and clean energy alternatives in their policy statement? It beats Mantle, who said “I am extremely anti-liberal and anti-right wing so I can’t imagine what it is that has led them to decide that I am the candidate that they would prefer to preference.”

Fitton has a reason (sort of): “No presidential candidate has Liberal-aligned views.” Those abreast of the factional in-fighting that plagues USyd’s Liberals would guess that maybe Stand Up’s partnership with Ignite – a group from the left faction of the Liberal party – has everything to do with it. With the left faction taking leadership of the Liberal Club less than a month ago, wounds are still raw and when hurt, we do crazy things.

Vast changes to degrees and a new student discipline rule weren’t enough to keep Acting Dean of Arts Barbara Caine engaged with last week’s Academic Board meeting. Instead, she kicked proceedings off with a very on-brand round of ‘Word With Friends’, before devoting the remaining meeting time to iPad-based Solitaire.

Honi was disappointed to see Caine throw several seemingly winnable rounds. We recommend not being so hasty to stack your foundation piles in the future. 1

Claudia Rankine, Citizen: An American Lyric (2014); “Language that feels hurtful is intended to exploit all the ways that you are present.” 134