A number of SRC councillors-elect may pull the balance of power from a Labor-Liberal alliance ahead of the election of the SRC executive this Wednesday.

Honi has become aware of up to 9 councillors (5 from Power, 2 from Ignite and 2 Independents) who are willing to vote on either side of the floor to threaten the presumed Stand Up/Ignite majority.

With so many moving parts, the voting blocs could range from a Stand-Up/Ignite supermajority of 23, to a Power majority of 17, mostly dependent on the movement of Sam Chu and Amelia Chan from Ignite.

SRC Executive and Office Bearer positions will be chosen by the vote of the 33 councillors elected in the general election of week 10. The prominent positions up for grabs are Vice President, General Secretary (who will construct the SRC’s budget), Education Officer, Welfare Officers and General Executive. The General Secretary stipend is over $20,000.

Police were called to last year’s Reps Elect  as the balance of power   shifted from pre-existing deals. 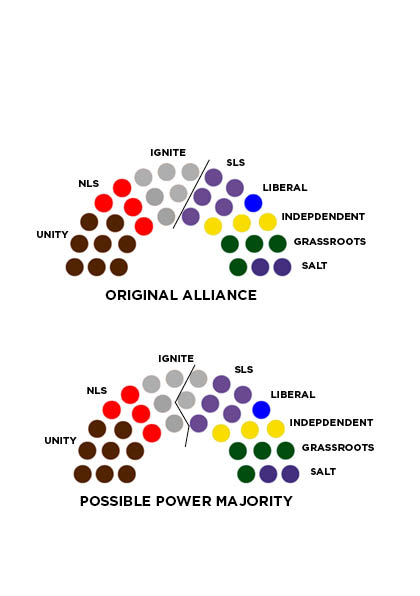 Despite campaigning in a coalition with Grassroots under the Power banner, senior members of SLS told Honi they were willing to form an alliance with either Stand Up/Ignite or Grassroots.

Current USU Board director Shannen Potter confirmed SLS had approached Stand Up for discussions, but said they remained equally open to other factions and Independents.

Despite rumours of a split in SLS, she promised that all five would vote together.

Members of Stand Up and Ignite claimed SLS offered them a supermajority coalition of 23, which would entirely lock Grassroots out of any higher positions.

If the Power coalition holds, a potential bloc of four independent councillors could deliver them a majority.

There is a possibility that Samuel Chu and Amelia Chan, of the ticket Team Cumbo (Ignite), will cross the floor to vote with the Power group. If Independents Alex Fitton and Pat Ryan follow suit, the four would hold the balance of power.

Honi understands that Fitton (sole Soft Right Liberal) has not locked down any alliances. It’s been suggested that he may vote with Power against the Ignite Vice Presidential nominee Ed McCann due to a long-running factional stoush, but this is unconfirmed.

Meanwhile Ryan, of the now-infamous Twins for Tickets told Honi “All factions on campus have approached us except Socialist Alternative”, and said he will talk to any and all factions before Wednesday.

He would not reveal which positions he was interested in, but said “positions on the SRC are like Tazo cards. You get as many as you can.” We have heard that he’s happy to settle for a General Executive position.

Ryan said he had not met with Chu or Chan, and had only consulted Fitton for general advice.