While the urban public argue with each other over the finer points of tax cuts and negative gearing, rural NSW is really hurting. Years of drought and mismanagement of the Murray-Darling river system have left entire towns without drinking water, and many residents feeling that they have no future. Walking through these places is like something out of a horror movie – boarded up shops, tumbleweeds and dust devils blowing by, run-down weatherboard houses baking in a summer sun so hot it melts the asphalt. Local Aboriginal people face a bleak reality in which they do not have water on their own country, and grapple with what it means to culturally as well as materially depend on a land which is being destroyed. But these communities are also extraordinarily resilient, and you find inspiring characters and powerful stories of hope as often as you find anxiety. This is a small story about one community effort to respond to this crisis.

Activists from Sydney-based Aboriginal rights group FIRE (Fighting in Resistance Equally), including a number of students from Sydney Uni, have delivered water filters to the town of Collarenebri this weekend as part of an ongoing community response to the water crisis in Western New South Wales (NSW).

Collarenebri, located 750 kilometres North-West of Sydney, is a majority-Aboriginal community in the lands of the Gamilaraay/Gomeroi people. The town has been on Level Five water restrictions for a number of months because of the declining water levels in the Barwon River, from which the town’s water is supplied.

The Barwon River has not flowed for over nine months, and now consists only of a series of stagnant pools including the one behind the dam at Collarenebri. This has been a common prospect for many of the two million people who live in NSW’s Murray Darling Basin.

Local Gomeroi elder Uncle Larry Flick has been coordinating the delivery of donated water to Collarenebri, and  organised the distribution of water filters throughout the community He’s lived in the community for 64 years and while there have been periods of drought before, Larry says the river has never been this dry before. Mr Flick was born in 1954 and aside from a few years of moving around, he has lived in Collarenebri his whole life. Larry has 4 children, 22 grandchildren and 8 great grandchildren. He is a big family man who aspires to be just like his inspiration in life – his grandfather. Larry has always respected and maintained the voice of Aboriginal People within his community and since becoming the chairperson for Collarenebri’s community working party, he wants to be a voice for his region. Larry is also a member of the Land Council.

“That ‘65 drought was supposed to be a once-in-a-lifetime drought. But now that period is getting shorter and it happens every 10 years”.

The water in the weir contains very low levels of oxygen and has high levels of sediment and algae, with residents complaining of the water’s foul taste and numerous negative health impacts.

“You can’t even drink the water at home,” says local resident and Gomeroi woman Louise Sims. “You get kidney infections, bladder infections, you’ll start to get lumps on your skin.”

The majority of residents avoid drinking the water and rely on bottled water, either donated by community groups or purchased themselves. Bottled water is several times more expensive in these remote areas than in Sydney, and residents in Collarenebri are often required to travel over 100 kilometres to supermarkets in neighboring towns in order to purchase it. The water’s foul taste has led to problems with dehydration as residents either avoid drinking or substitute water with soft drinks. Given the town frequently ‘enjoys’ summer temperatures topping 45 degrees, this presents a serious problem.

Matthew, a local nurse in the community says that the past summer saw record levels of admissions to the local clinic for cases of dehydration, especially among older people. Another resident, Gomeroi woman Alison Hinch, is deeply concerned about the health impact of the water on older people in a community where Aboriginal people already have a very low life expectancy. “If our elders can’t drink the water and feel like they’re dying inside, then it’s a flow on effect throughout the community, it goes right down,” she says.

Aboriginal men in Western NSW live on average 58 years, compared to over 78 years for the wider NSW population. Uncle Larry is 64 and is the third oldest Aboriginal man in the town. Poverty, chronic stress and poor-quality diets in an environment where fresh food is very expensive are the main reasons for this.

Since January 2019, FIRE has been fundraising to deliver drinkable water to Aboriginal communities in north-west NSW affected by this crisis. The efforts originally began through the purchasing of bottled water in Sydney using donated funds.  The cargo was then driven to  affected communities in volunteers’ cars.

Since then, the effort has evolved into a larger operation in collaboration with other community groups such as Dignity Water and Menindee Water Run. Water is purchased in bulk, sometimes including donations from supermarkets, and delivered by truck to communities where they are distributed by locals and FIRE volunteers. It is these methods  that have allowed FIRE to deliver over 100,000L of water since January to affected communities. Donations have come from all over NSW, including Goulburn, the Illawarra via the local Aboriginal Medical Service, and from Canberra. Local organisations such as Dharriwaa elders group and the Walgett Local Aboriginal Land Council have also been involved in distributing donated water along with local volunteers.

During the summer, disastrous water quality levels lead to the death of over a million fish at Menindee. In the aftermath, Menindee Water Run facilitated the installation of water filters for the entire community. This medium-term solution allowed people to use the local town water, free from fear of adverse health impacts. Following this model, FIRE has decided to provide water filters for Collarenebri, another town reliant on stagnant weir water which could be filtered to an acceptable standard. Sydney University students from the Environment Collective managed to raise $5,000 to contribute to this effort.

The sad state of the rivers reflects the lack of rain throughout NSW for the last couple of years, but it is also a fundamentally political issue. Cotton irrigators have a stranglehold on water policy in the upper Murray-Darling basin. Scientists have argued that the over-allocation of water licenses to irrigators is indeed the primary instigator for the low levels of water in the Barwon, rather than being a product of the drought alone. There have been enough rain events further up the catchment with the potential to provide relief for towns such as Walgett and Collarenebri, but the water was intercepted by irrigators before it got there.

In all levels of government have been some combination of ignorant, apathetic or negligent on this issue. The local Walgett shire refuses to acknowledge the water quality issues in both that town and nearby Collarenebri, claiming that the water is generally safe to drink. This has been contradicted by water testing organised by Dharriwaa Elders group in Walgett, which found that the bore water in the town has three times the safe level of salt. This is especially problematic for a community where salt exposure is already high because of the town’s reliance on cheap, salty preserved foods.

And yet, the Bourke Shire Council inadvertently admitted the following:

“NSW Health has given advice to doctors about patients who may need special attention because of the extra sodium in the drinking water. These are pregnant women, and people with advanced kidney disease, poorly controlled high blood pressure, diagnosed heart failure and others who are on a low salt diet. Council appreciates that some people are concerned about the taste of the water. Chilling your drinking water can help reduce the salty taste. You could also add flavouring such as mint, a slice of fruit, a splash of fruit juice or low-sugar cordial or make a flavoured brewed tea, which may improve the taste.”

Water quality information for Collarenebri is not currently available, although previous alerts have been issued instructing residents to boil the town’s water supply to ensure it does not contain harmful microbes. FIRE is organising water quality testing for Collarenebri and will publicise the results when available.

The State Government has been largely silent on the issue, despite significant political upset in the Far West, culminating in a state election victory for the Shooters and Fishers Party, elected to the seat of Barwon largely on the basis of widespread outrage about the water crisis.

The Federal Government has simply suggested that the situation is a result of the drought, remaining silent in response to requests for community assistance, and investment in more reliable water infrastructure for these communities. Federal Environment Minister Melissa Price has continually refused to meet with community members about the water issue.

Water is not only fundamentally important for sustaining the health of these communities. The livelihood of the rivers is deeply implicated in other aspects of wellbeing. Rivers offer a crucial space to cool off, socialise, fish, and transmit cultural knowledge for local Aboriginal communities. Droughts are associated with declining mental wellbeing and higher rates of youth crime, especially in the punishing summer heat. This has led some local Aboriginal people to argue that the dominant water policy is essentially a form of cultural genocide, and underpins real fears about the future of these communities.

“We all grew up along the river and lived off of it — yellowbelly cod, yabbies, mussels, you name it,” says Uncle Larry Flick. “With that river dry, I really worry for my grandchildren and great-grandkids. Without that river us Murris are nothing.”

“It’s very simple,” says Uncle Larry. “If there were 20 million of us and 1 million of you, we wouldn’t treat you like this.” 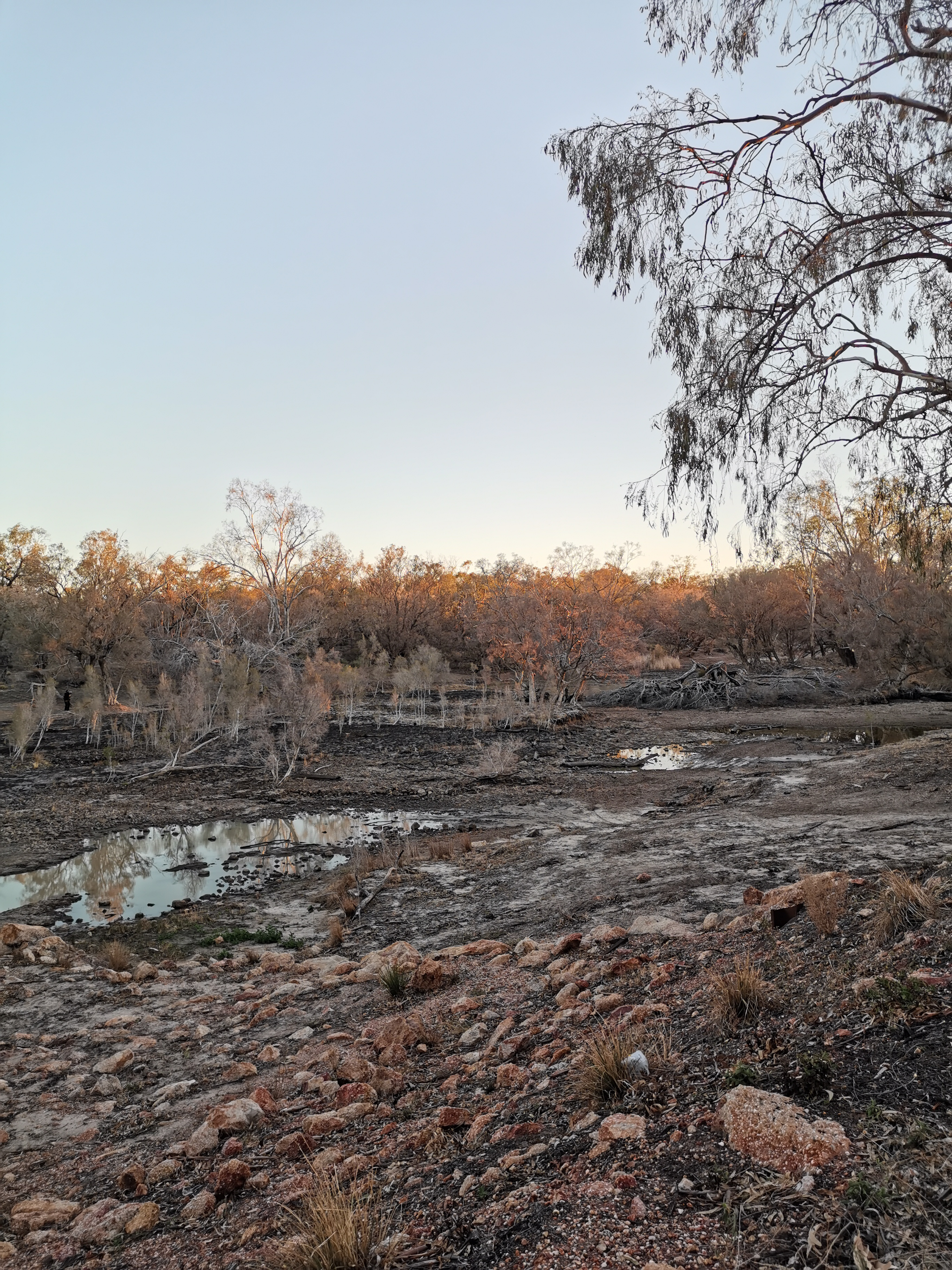 While the installation of water filters provides a medium-term solution for Collarenebri residents, the water crisis remains an ongoing issue. The health of the river system shows no sign of improving under current government policy. The efforts of community activists — unionists and students hand in hand — reflect a notable instance of solidarity. Yet, they also speak to the deeply broken nature of Australia’s government.Many other communities are reliant on bore water, which contains unsafe levels of salt. This water is not suitable for filtration by household systems and these communities will continue to depend on bottled water until local infrastructure is improved.

In two weeks, FIRE will again be collaborating with Dignity Water to deliver 66,000L of clean water to the town of Bourke.

If you would like to help, you can send money to FIRE:

Write ‘water gift’ in the description.