Over 500 people gathered on Gadigal land in the CBD today in solidarity with the Djab Wurrung people of ‘Victoria,’ who are currently fighting to prevent 3000 trees on their country being cut down to make way for a road project. These include sacred birthing trees. Organised on Thursday by the Anticolonial Asian Alliance (AAA), the large showing was a particularly powerful sign of solidarity for both those in Djab Wurrung, and all other First Nation people fighting for sovereignty over their land across the continent.

The action was sparked by the desperate state of protests. Vacation notices were given to all those currently camping on country on 8 August, and ran out on 22 August, such that police may now arrive to evict all people from the area at any point. For at least the past year, traditional owners and allies have camped at the Djab Wurrung Embassy to prevent the Western Highway duplication project.

Ella Watt began the afternoon acknowledging where people were gathered, and centred the anticolonial sentiments of the action, calling for “solidarity with Djab Wurrung, and with all First Nations people across so called Australia and the world, who continue to see their land destroyed in the name of government and corporate greed.”

“We have seen in the last couple of months with the Amazon, with what’s going on in this country, in Gamilaroi country, [and] across Australia, [that] the destruction of land just keeps happening. We are at a crisis point, we have to act.”

Given the importance of the at risk land to “women’s business,” particularly the birthing trees, the action centred the voices of Aboriginal elders.

Batjala and Meriam woman Faith Black, from Indigenous Social Justice Association, shared her understanding of the importance of the trees.

“It’s a birthing place, and we women know what birthing means. This is a place that held for thousands of years the stories of children who were born, and it’s one of those places that we come to wake even to go to our mothers.”

Gamilaroi woman Aunty Shirley Lomas furthered Faith’s message, speaking at multiple points over the course of the afternoon, both at Sydney Town Hall, and following a brief occupation of the Railway Square road.

Speakers emphasised that marginalised groups across the settler colonial state are implicated in the fold of First Nations struggles. Harry Bonifacio, of AAA, spoke to the importance of organised solidarity from all settler communities as part of the defense of First Nations’ struggles everywhere. 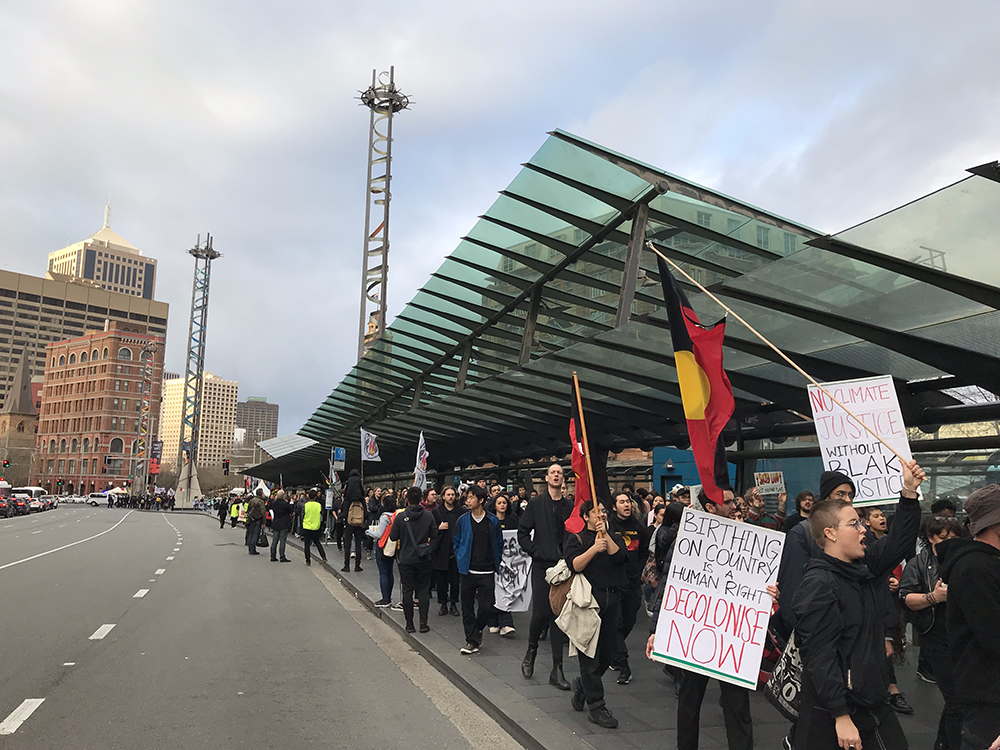 “Australia at the end of the day is built on genocide…All of us as settlers need to realise that there is no greater, no more important struggle than the anticolonial struggle on this environment.”

Despite the Federal Court overturning the previous environment minister, Melissa Price’s decision to proceed with the project, and 15 trees have already being granted protected status, the current environment minister Sussan Ley still plans to carry out the road project.

Bonifacio also spoke on the ongoing action against the proposed Adani Carmichael coal mine. Earlier this week, the Queensland Labor government extinguished native title rights over Wangan and Jagalingou country — over 1,385 hectares to make way for the construction of the mine.

Going forward, while those at Djab Wurrung continue to camp in the hope of defending the trees, the Djab Wurrung Embassy has recommended several courses of action. Where people are not able to help camp and blockade the trees, the Embassy says people can “contact government and relevant figures,” including members of parliament like Victorian Premier Daniel Andrews, planning minister Richard Wynne and transport minister Jacinta Allan, as well as Victorian Roads and the project contractors: Major Projects Victoria, CPB Contractors and Seymour Whyte Group.

The Embassy is also calling upon people to donate money to help sustain the blockade.