A higher percentage of students at the University of Sydney have experienced sexual assault or sexual harassment than the national average, the Australian Human Rights Commission national survey reports.

While the University of Sydney’s individual report dedicates almost ten pages of its thirteen-page document to discussing data relating to sexual harassment in detail, data on sexual harassment are confined to less than two pages. Readers aren’t privy to the reported reasons students didn’t make a formal report or complaint about their sexual assault, who the perpetrator was, or where the assault occurred, despite the fact this information is provided for incidences of sexual harassment and was collected in the survey.

Students at the University of Sydney were also less likely to know how to access support services compared to the national average. 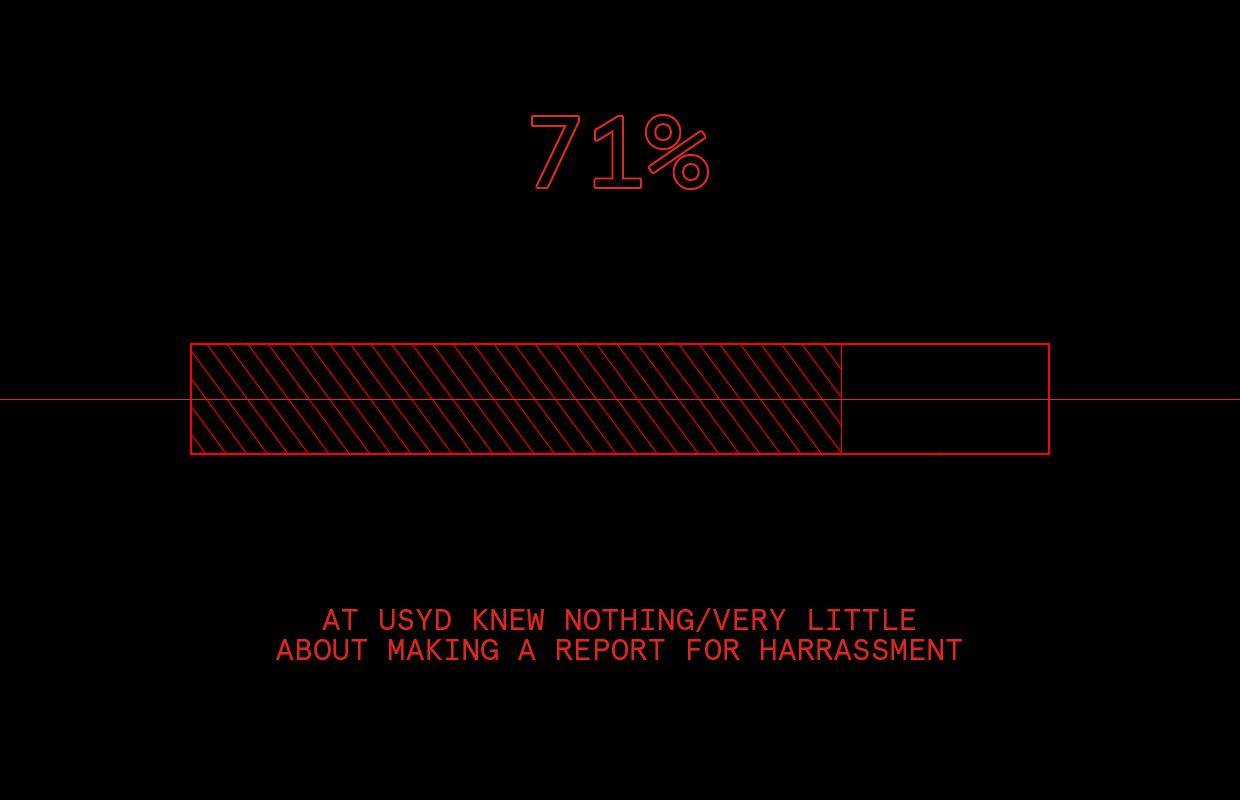 When asked why they didn’t seek support services, women were four times more likely than men to avoid seeking support for their sexual harassment at USyd because they did not want to hurt the offender or get them into trouble.

not surprised but its still painful. USYD has a toxic culture when it comes to sexual harassment and assault that needs to be changed! https://t.co/2sUQSyBKI5

“This year I have had many students disclose their experiences of sexual assault. They’ve told me about how navigating the university bureaucracy exacerbates trauma and often seems futile,” said Grant.

“Survivors continue to report that they feel discredited, silenced, and their abuse minimised or disbelieved.”

The University of Sydney has faced ongoing criticism for how it has addressed issues of sexual assault and discrimination. A letter obtained by Honi revealed the University of Sydney objected to police releasing information about an attempted assault on campus last year in the name of “public interest” earlier this year.  Campus security also removed posters advocating for a greater university response to sexual assault on campus at the last info day.

The University will implement all eight of the Australian Human Rights Commission’s recommendations, as outlined in the national report,  Vice-Chancellor Michael Spence said.

“Our University is deeply committed to that responsibility and to eliminating intimidating, abusive, disrespectful or threatening behaviour from our campuses and the communities we serve,” University of Sydney Vice-Chancellor Michael Spence said.

“The University of Sydney will implement all of the recommendations contained in the report, and we will meet with students and staff over the coming weeks to discuss the detailed statistics and the University’s ongoing response.”

However, according to the University’s website, USyd has only committed to following Universities Australia’s Respect.Now.Always 10-point action plan, not the AHRC’s official recommendations as contained in the national survey report.

While there is overlap in the recommendations from Universities Australia and the AHRC, including developing relationships with external services, and educating staff and students about sexual assault and harassment. But the University of Sydney has not committed to undertaking steps exclusive to the AHRC’s report, which include undertaking an expert led review of their institution’s existing policies and response pathways, and establishing a committee comprised of University officials and student representatives to oversee the implementation of these initiatives.

If you have experienced sexual assault or sexual harassment and feel you would like to speak to someone for support or information, NSW Rape Crisis Centre (Phone: 1800 424 017) can provide counselling 24-hours a day, 7 days a week.