Sydney’s CBD was reverberating with chants of “stand up, fight back,” as protestors took to the streets on Saturday afternoon, demanding equal pay and an end to violence against women around the world.

The protest began in Hyde Park and made its way to Belmore Park, with speeches and performances by the Trade Union Choir, Asian Women at Work, and Kurdish dancers among others.

In a powerful moment of female power, protestors gathered on Gadigal land to pay respects to elders past and present, with Auntie Millie Ingram speaking at the IWD 2019 rally.

Ingram condemned racial injustice against Aboriginals in Australia, who make up 50 per cent of the incarcerated population in prisons across the country. She also criticised the appointment of Former Prime Minister Tony Abbott as Special Envoy on Indigenous Affairs to the Federal Government in 2018 instead of a First nations leader.

Vehement calls of “shame” against the Australian government resonated throughout Hyde Park.

Ingram believes that as Indigenous voices often go unheard, women must take control of the situation and exercise their rights in Australia.

“Let’s build on what we have together, not what our differences are, because as women we might be from different nations, nationalities and have different hair colours, but we are still here together, we still have rights and we have to make the government see that.”

Jade Child, who spoke at the rally on behalf of Early Childhood Educators, also criticised the government’s apathy towards equal pay and equitable working conditions in a largely “female dominated industry.”

One statement by Child was particularly well received by the excited crowd: “Look out Scotty Morrison, we are giving you the boot,” she said.

As the protest marched on, chants of “racist, sexist, anti-queer, Liberals are not welcome here” and “we won’t step down, we won’t submit, we won’t take your sexist shit,” resounded through the CBD.

Divina Blanca from Democracy in Colour, a rights organisation for intersectional people of colour, also spoke at the rally. They called for the recognition of the marginalisation and violence faced by women.

“Look around you, we are all here today for those who aren’t: our sisters, those who have been murdered by the hands of their partner, those who face discrimination due to their line of work… we are here for those who don’t identify as a feminist so that one day they also take up the fight.”

The rally also observed a minute of silence for Sydney woman and doctor Preethi Reddy, who was murdered this week.

Only three months into 2019, 12 women have been murdered at the hands of men they knew. In 2018, 69 women were murdered and sexually harassed by a male they knew. 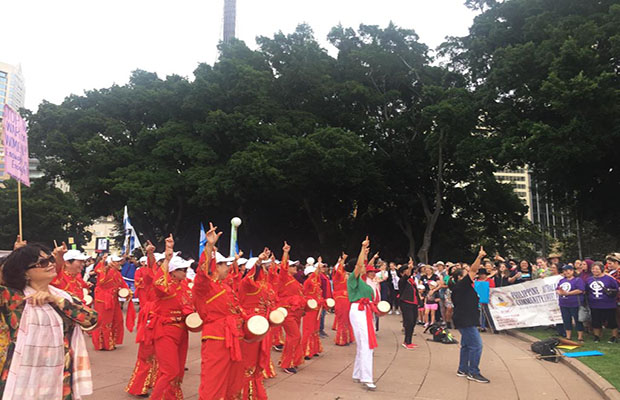 Among many performances at Hyde Park before the march, one was by the Asian Women at Work drummers (pictured). 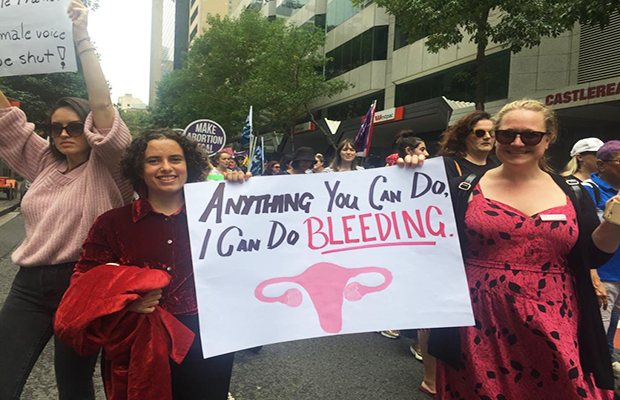 The march makes its way to Belmore Park in Sydney’s CBD.  Protesters hold a sign which reads “Anything you can do, I can do bleeding.” 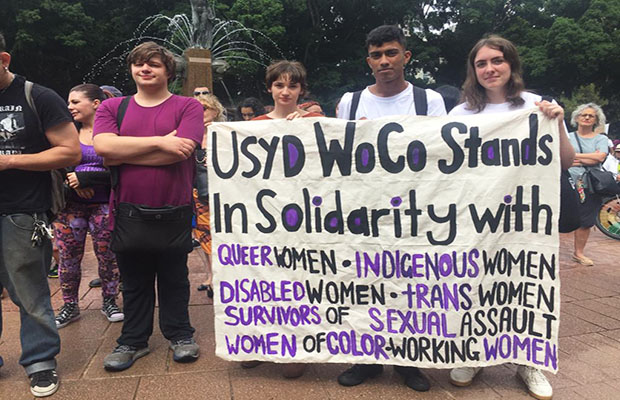