The three-way race to edit next year’s Honi is currently a dead heat, and Isabella Brook is inching ahead of Georgia Mantle in the contest for SRC president, according to incredibly unscientific exit polling conducted today on the first day of SRC voting.

At this point, Honi believes both elections to be too close to call, especially given the small sample size of all available polls, including those published by other student outlets (PULP and USyd Update).

Though we canvassed 333 voters, there was no guarantee of polling consistently across all booths at all times, which does not account for certain tickets’ strategy of targeted voter surges at certain booths. Nor did any student poll cover satellite campuses (increasingly important in close elections).

The fact that Update and Honi arrived at different orders of tickets is a good indication of just how close the Honi race is. A mere 18 votes separate the three in our poll.

Today’s polling indicates that TIME and WET are marginally ahead of SIN. Of 327 responses, TIME and WET earned 115 votes apiece, giving them each 35 per cent of the vote.

SIN garnered 30 per cent with 97 first preferences. Given this is only a difference of 18, and our sample size represents roughly a third of all votes cast today, Honi is calling this contest as effectively even. 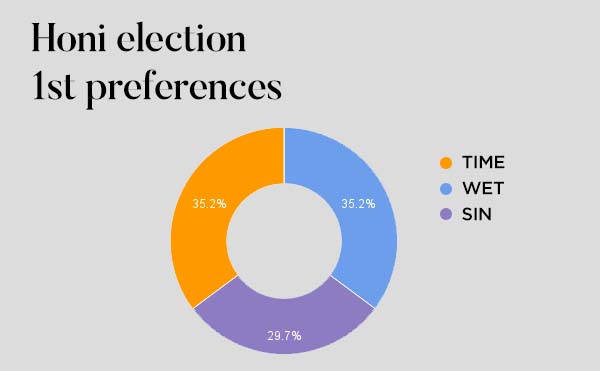 Analysis is best started by looking at the second preferences. WET are completely outstripping the field, as a result of being preferenced on both SIN and TIME how to votes.

If either SIN or TIME come third on primaries, it is likely a large number of those votes will flow to WET, giving them a leg-up in the contest for first place.

But we suspect a lot of voters will have elected not to preference beyond their first choice. 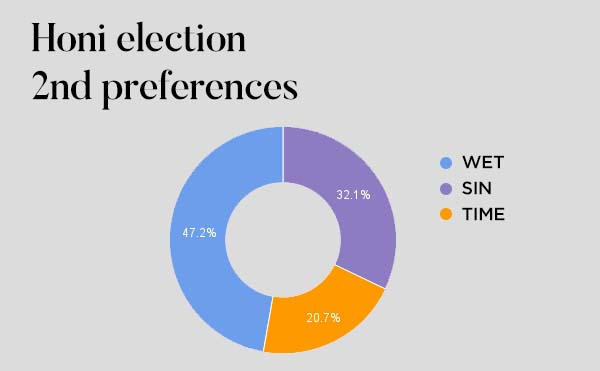 Our poll of 307 responses indicates a slight lead for Isabella Brook over Georgia Mantle, although again, this accounts for a difference of only 13 votes.

Brook’s lead however, was steady across the whole day, with Mantle never inching above 50% at any point. 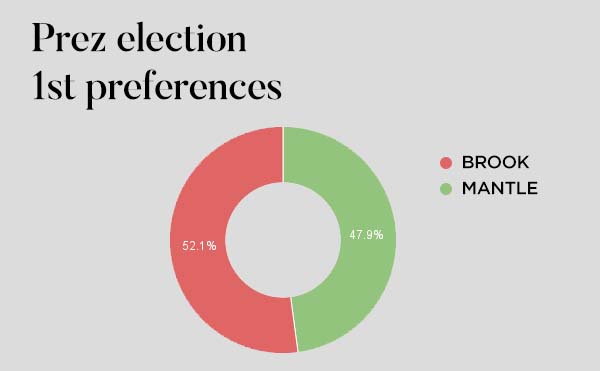 – We have no way of knowing whether voters who declined to participate in our poll tended to be supporters of a particular group, thereby skewing the results.

– This poll was conducted across the whole day of campaigning, but most responses were collected between 9:00am and 4:00pm.

– This poll was conducted at the Jane Foss Russell, Fisher and Manning booths. No responses were taken from Cumberland campus or the Sydney College of the Arts.

– Booth attendants estimated the total number of votes cast today to be more than 1000.