Controversial commentator and sex therapist Bettina Arndt was met with protesters at her talk, ‘Is there a rape crisis on campuses’ at USyd today. Arndt, who is currently on a university tour, is known for dismissing the ‘manufactured rape crisis’ in tertiary environments, specifically cases taking place in colleges. Tonight’s event was hosted by the Sydney University Liberal Society (SULC) and had an overall turnout of approximately 40 people.

At the doors of the event, a crowd blocked the entrance to the History Room s223 in the Quadrangle where the talk was taking place, preventing ticket-holders from entering the building. The protest was organised by the Wom*n’s Collective and prompted an altercation between activists and attendees.

“Bettina’s ‘Fake Rape Tour’ across university campuses in Australia is a misinformed and harmful attempt to undo the work of generations of student activists and advocates in combating the issues of sexual violence on campus. We refuse to allow her rhetoric to go unchallenged,” Wom*n’s Officers, Jessica Syed and Madeline Ward told Honi.

Last week, Arndt was almost stopped from speaking at La Trobe University in Melbourne, before the University backpedalled on their decision. Honi understands that Arndt approached SULC as part of her wider tour and was not financially compensated.

“Rather than engage with the sexual assault campaign in a meaningful way, [SULC] has instead chosen to entertain the views of a woman who, quite frankly, has no idea what she’s talking about,” Syed and Ward said.

“We’re not sure why peaceful discussion is so threatening to the left,” said SULC President, Jack O’Brien. “Universities should be places for vigorous debate and robust discourse, and part of our role as the Liberal Club is to encourage that.”

Inside the room, Arndt was physically frazzled, calling the protest “disgusting” and accusing those outside of “attacking [Arndt and attendees]”. She urged the small group with her to film the protest from the doorway and requested for the event to be cancelled twice, before changing her mind and instead calling the police. At ten past six, five minutes before Arndt was scheduled to commence her talk, the emergency alarm rang. 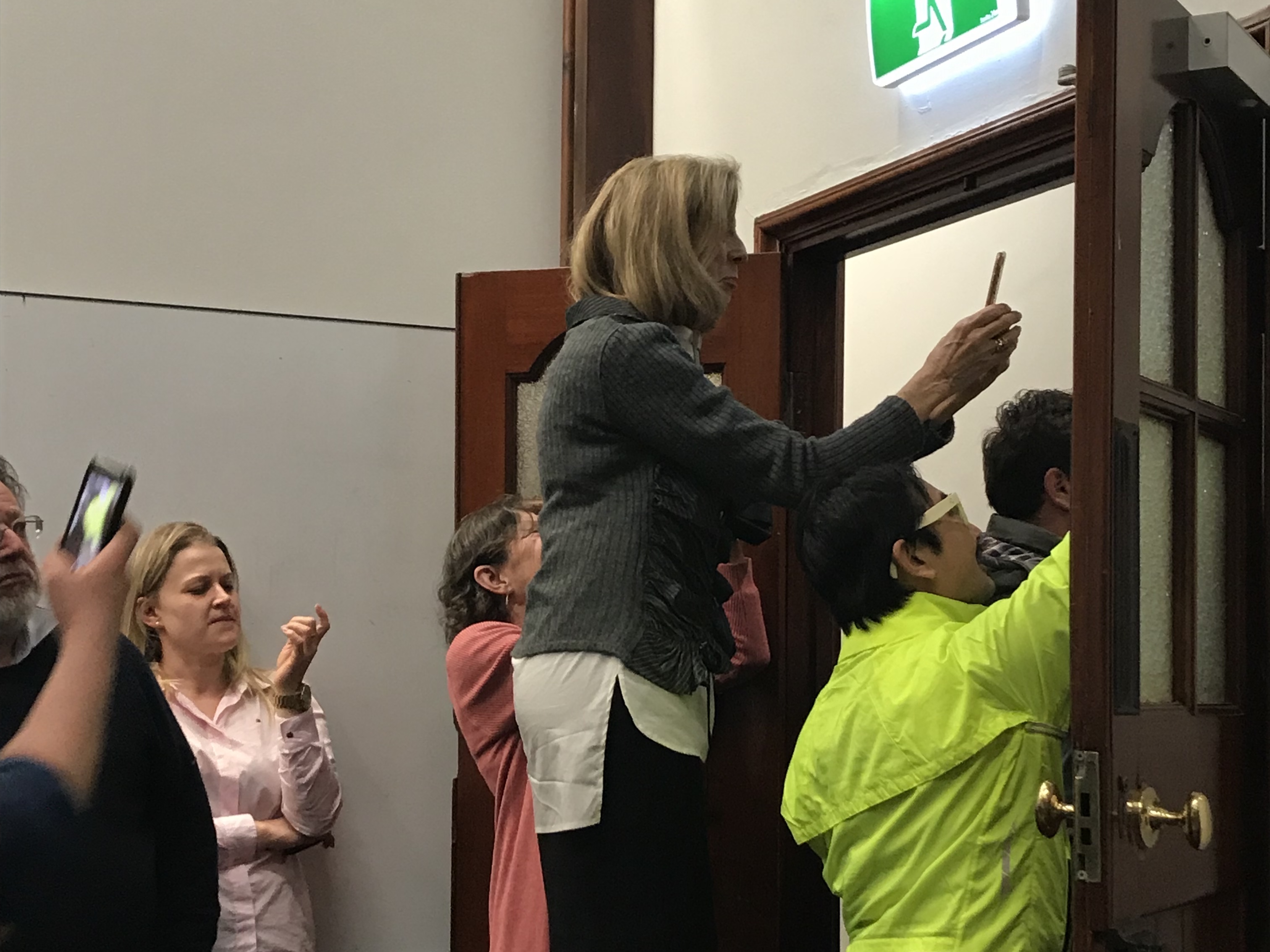 At the time the physical altercations started to break out, only a single security guard was present. This was despite the University charging SULC around $320 for full security presence—a bill price that Arndt exaggerated by over $280 on 2GB this afternoon.

Chaos ensued after an older attendee charged at the human barricade formed in the hallway. A man later fell into the event room screaming for help, followed in by teary women and Young Liberals who described the situation as “fun”. Protestors described being pushed, shoved and gripped by attendees and backup security, before being forcibly dragged out by a riot squad. As protestors left the event, ticket-holders filtered into the room for the talk to begin.

The talk itself has been a source of contention since SULC first announced it last month. Arndt publicly condemned USyd last week for “[failing] to provide a venue” for the talk after the request processing took “over 10 days” (a University spokesperson told Honi that the wait time was actually six days, which is “consistent with standard practice”).

Further controversy surrounded platforming Arndt at the University. In a press release, the University justified hosting her as an opportunity for ideas to be “freely discussed, including those that some may view as controversial”.

“Giving Bettina Arndt a platform on this issue has the potential to cause a great deal of harm to students and survivors of sexual assault, who are having their experiences questioned by her tour,” Syed and Ward argued. 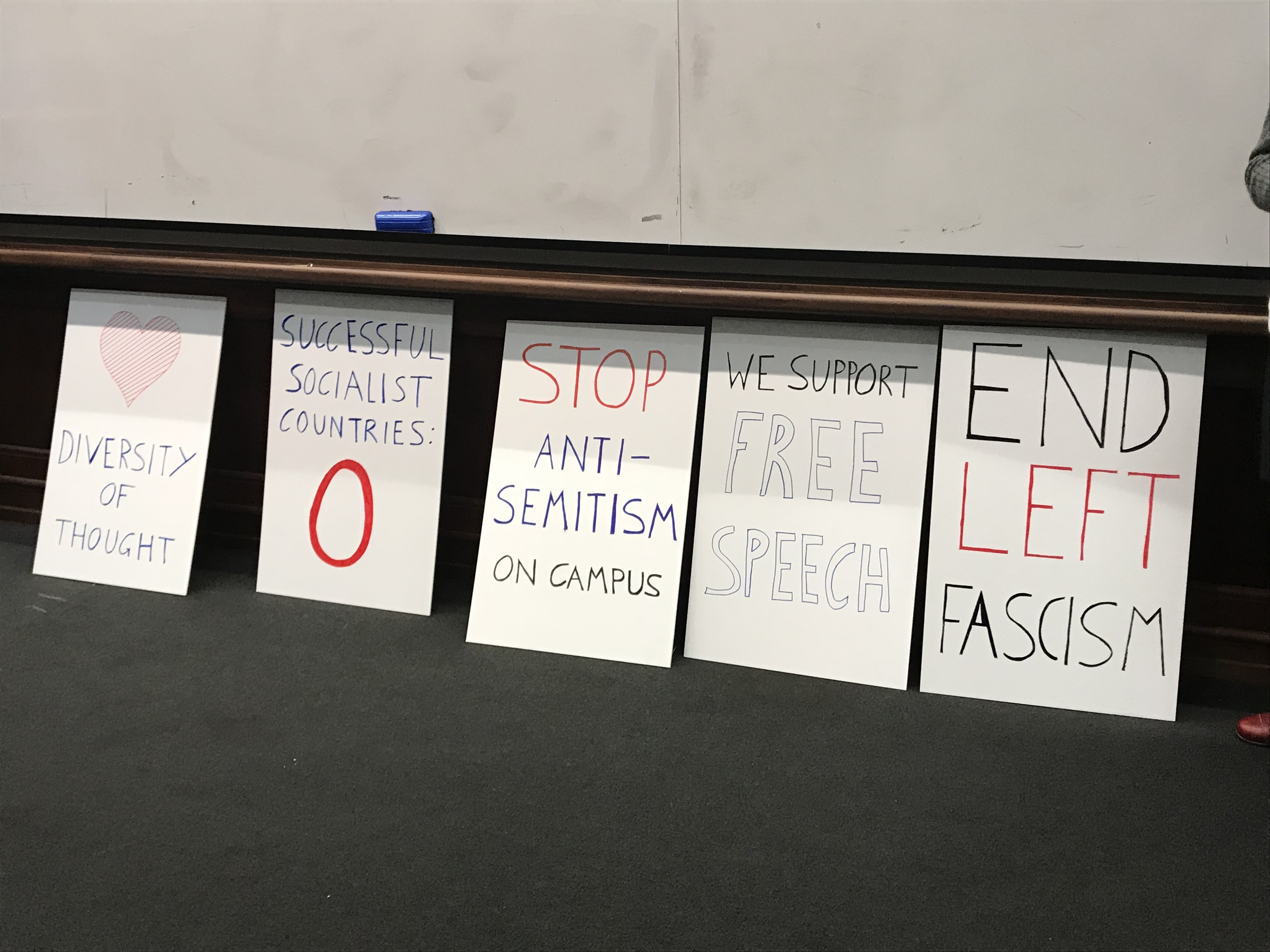 During her 45 minute speech, Arndt posited that universities should not interfere with allegations, and women should be held more accountable for sexual assault crimes. She maintained that “risks of being raped on campus are very low”, going so far as to note that universities were “100 times safer” for young women than “Indigenous communities and rough neighbourhoods.” She was unclear about what she constituted sexual assault to mean, and plugged her YouTube channel multiple times throughout the night.

The 2017 Australian Human Rights Commission ‘Change the Course’ Report—which Arndt actively critiqued in her talk tonight—found that one in five students were sexually harassed in a university setting, with 14% of incidents taking place on university grounds.