In a public Facebook post made today, University of Sydney academic Dr Tim Anderson announced that he has been “suspended from [his] position as a senior lecturer and banned from entering the university.” The decision follows a long-standing series of investigations made by the University’s Review Committee into Anderson’s public conduct, chaired by Provost and Deputy Vice-Chancellor Stephen Garton.

In a letter addressed by Garton to Anderson, shared with Anderson’s Facebook post, the Deputy Vice-Chancellor explains that Anderson was in breach of his contract of employment and several University policies through the distribution of certain lecture materials. 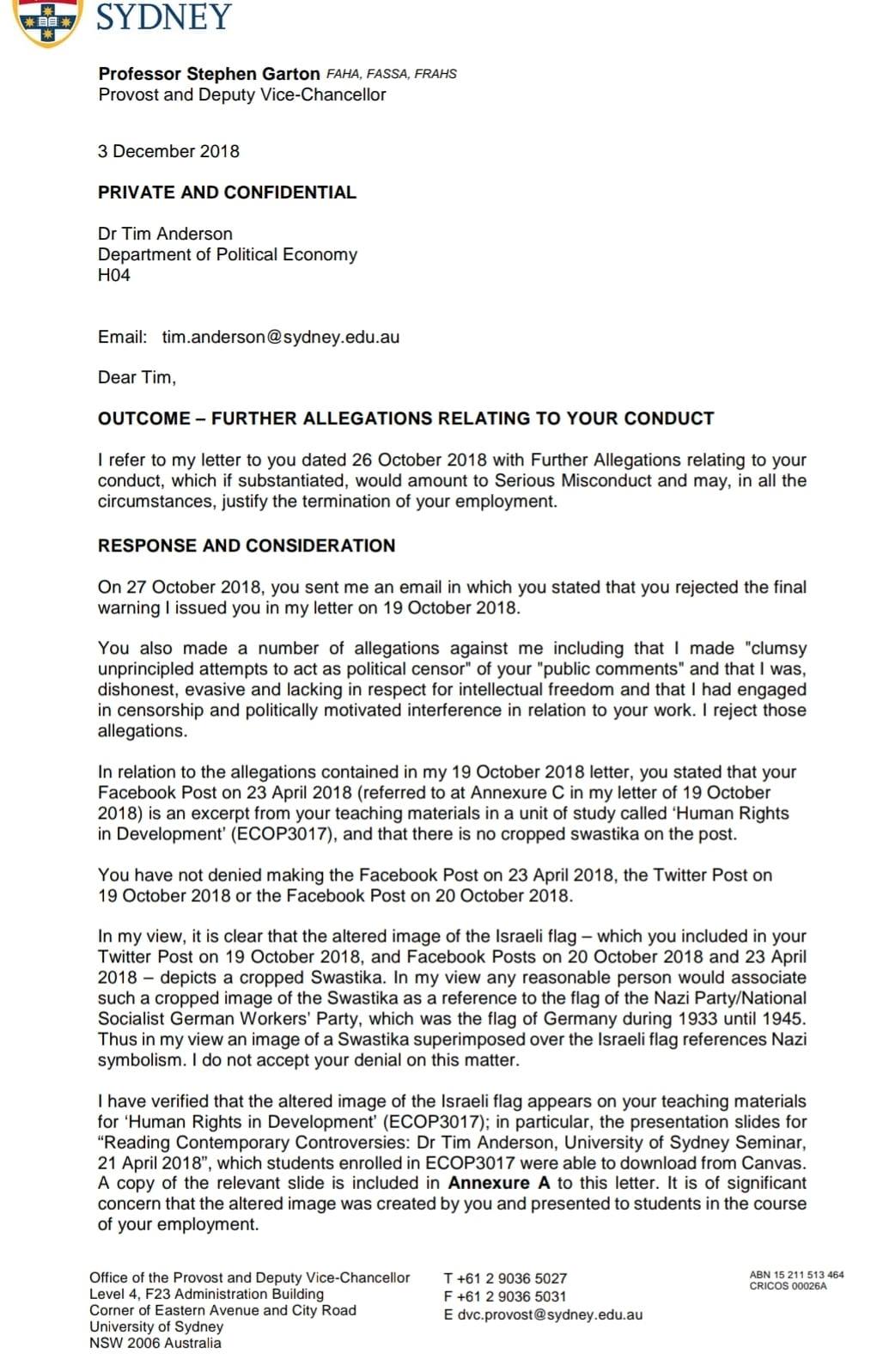 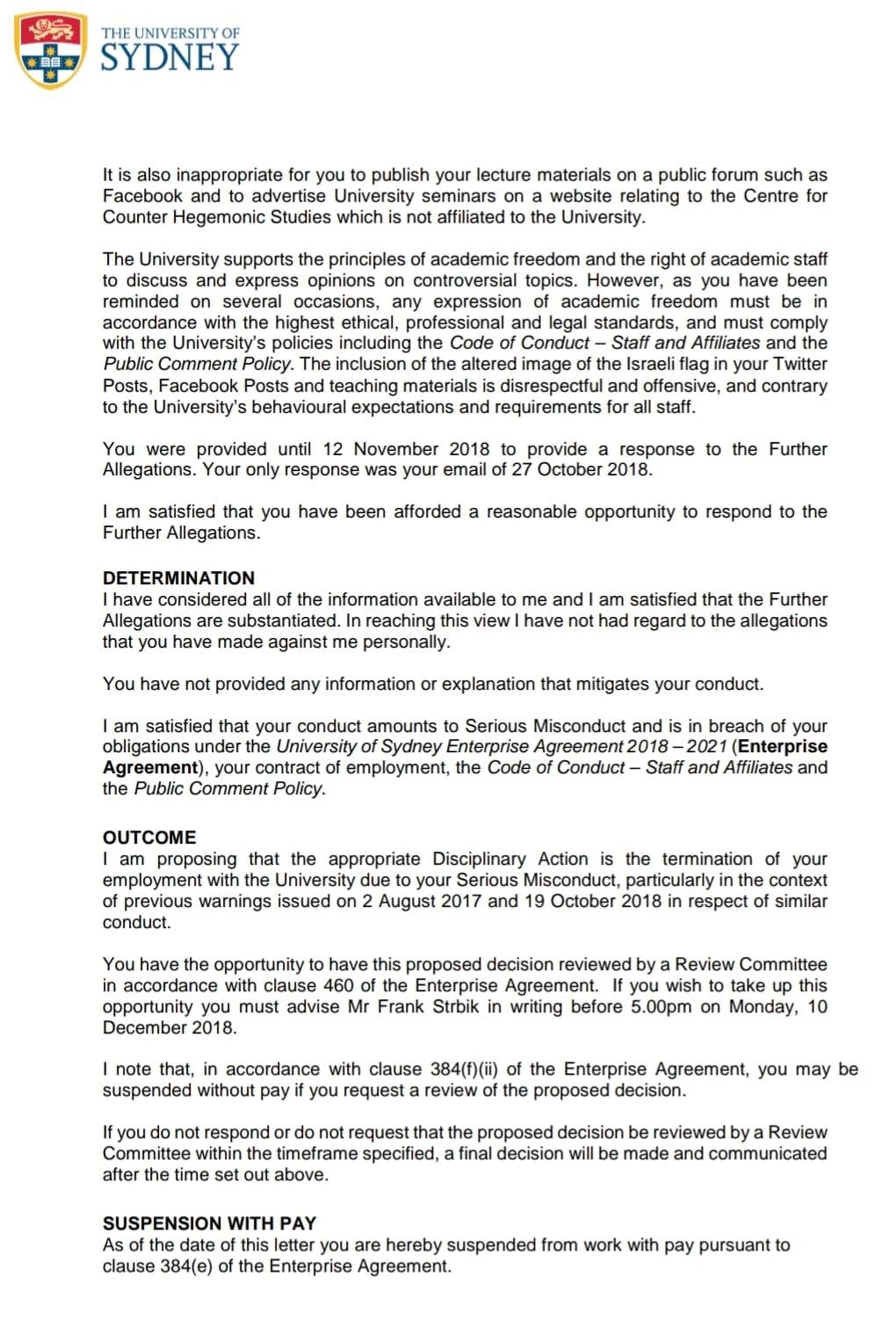 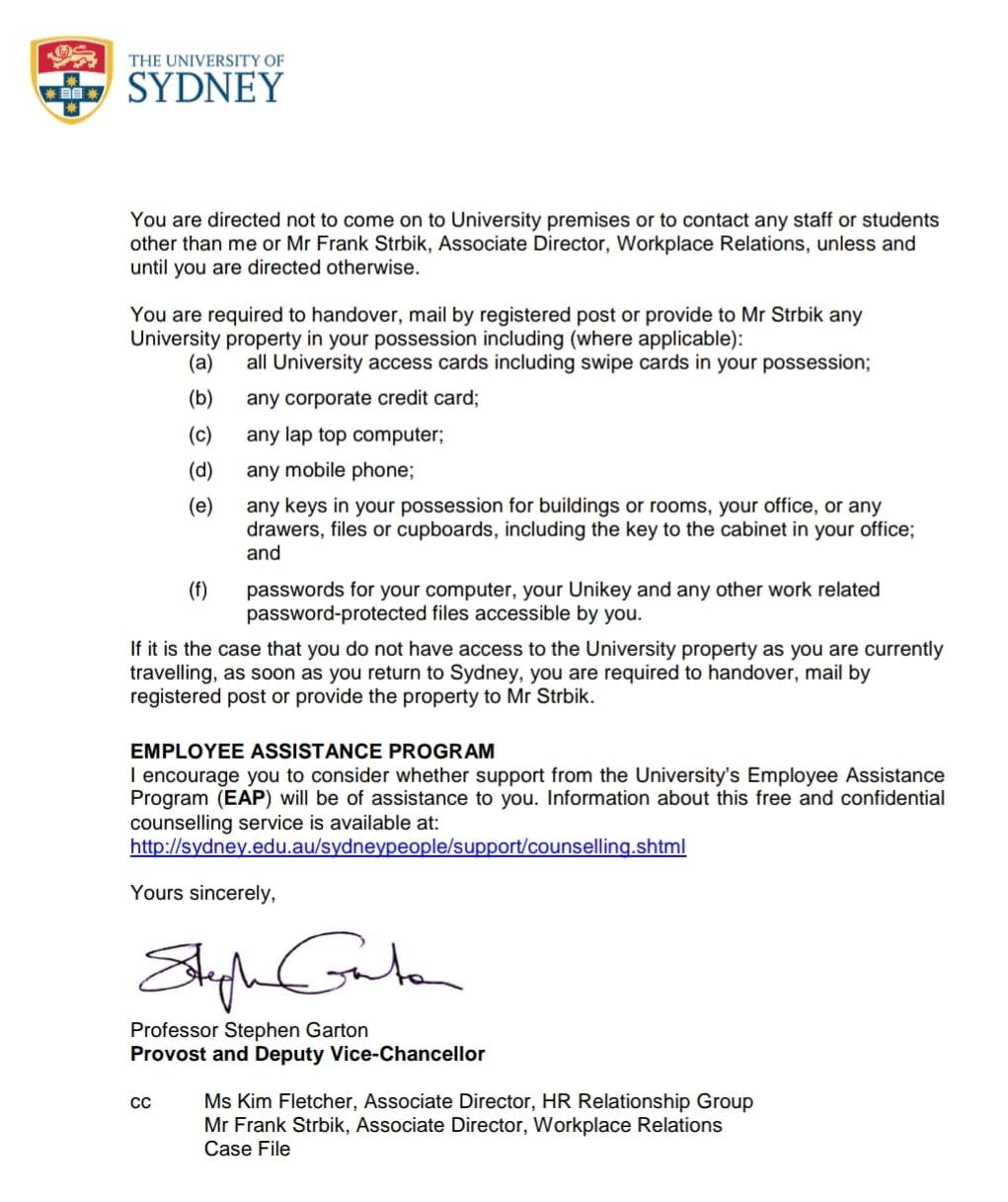 The Review Committee took issue in particular with Anderson’s teaching materials from ‘Human Rights in Development’ (ECOP3017), which outlines how to “look for independent evidence” when analysing Israel’s 2014 attack on Gaza, Palestine. On the slide, Anderson included an Israeli flag, which, according to Garton’s letter, depicts a “cropped Swastika” imposed over it.

Garton’s letter goes on to explain that Anderson’s use of the image was deemed particularly regrettable given it was available for download on Canvas, and was shared from his personal Twitter and Facebook account, as well as the Centre for counter Hegemonic Studies website – independent to the University of Sydney. By going beyond “controversial topics” otherwise permitted by the University, and engaging in “disrespectful and offensive” behaviour, Anderson has now been suspended with pay, banned from entering campus, and called before the Review Committee later this month to determine whether he will ultimately have his employment terminated.

In reply, Anderson questioned whether the graphic was offensive, explaining its usage in a broader context of “advisory analysis of the Israeli attacks on Gaza.” Anderson went on to question the pattern of political censorship behind the complaints he had received from the University over the past 18 months, suggesting that “most of the management complaints have to do with my criticisms of war propaganda against Syria, Iraq and Palestine.”

While Garton and the Committee saw Anderson’s behaviour as breaching the expected conduct of staff, Anderson disagrees.

“Stephen Garton has ignored the ‘intellectual freedom’ rule of the University, which states that academic staff are entitled to ‘express unpopular or controversial views, provided that in doing so staff must not engage in harassment, vilification or intimidation.’”

Anderson has previously been the subject of significant University Management attention. He has been criticised for his active support of Syrian President, Bashar al-Assad. Anderson met with Assad in 2013 and claimed that Assad’s forces were not responsible for a chemical attack on Khan Sheikhoun in April 2017.

In 2014, Garton published an opinion piece for The Australian commenting on how the University should accommodate fringe academic perspectives, such as support for the Assad regime in Syria.

“There are many in the university who will find the views of … Anderson naive, even wrong-headed, but free and open debate demands that we defend their right to hold such views,” Garton wrote. “Australia is a vibrant democracy, a value that we cherish and should defend, no matter how strenuous the challenge to our tolerance.”

This August, Anderson was investigated by the University for his support of his former colleague, Jay Tharrappel’s decision to wear a Houthi Resistance badge, which, when translated from Arabic, read, “God is the greatest, death to America, death to Israel, curse on the Jews, victory to Islam.” Anderson took to Twitter stating, “my friend’s badge was from Yemen …he wore it in support of the Yemeni resistance.”

Anderson plans to challenge his suspension when the Review Committee meets later this month.