Grandmothers Against Removal (GMAR) have sent a strong message to Australia’s politicians to end their long legacy of removing First Nations children from their families. Around 400 people met today in Sydney’s CBD to support the call to action to stop the breaking up of families and their culture on the 22nd anniversary of Sorry Day.

Since invasion in 1788, Australia has boasted a long history of child removals — a record that was thoroughly interrogated by all speakers. Since the first Sorry Day in 1998, when the Australian Government tabled the Bringing Them Home Report in Parliament addressing unprecedented rates of First Nations child removals, these numbers have increased five-fold. Less than 10 per cent of the 54 recommendations have been implemented, Aboriginal children are almost 10 times more likely to be placed in out of home care than non-Indigenous children, and in the Northern Territory, Indigenous children are 67 per cent more likely than non-Indigenous children to be placed in non-Indigenous care.

GMAR, who organised the event, describes itself as a “grassroots Aboriginal-led organisation that fights the ongoing Stolen Generations by taking political action, supporting families and raising public awareness.” It is run by aunties and grandmothers, many of whom have themselves been affected by child removals.

Aunty Hazel Collins, a GMAR founder, spoke to her personal experiences with having family members taken from her.

“I was a grandmother who was affected by these government policies. [This is a] difficult thing to talk about when you’re personally affected, but … its a conversation that all Australians need to hear,” Collins said.

“Kevin Rudd said sorry, God bless him! But he could’ve stuck it where the sun doesn’t shine, because the reality is, nobody gives a shit that he stood up and said sorry. If they did, no child would be removed within Australian borders.” 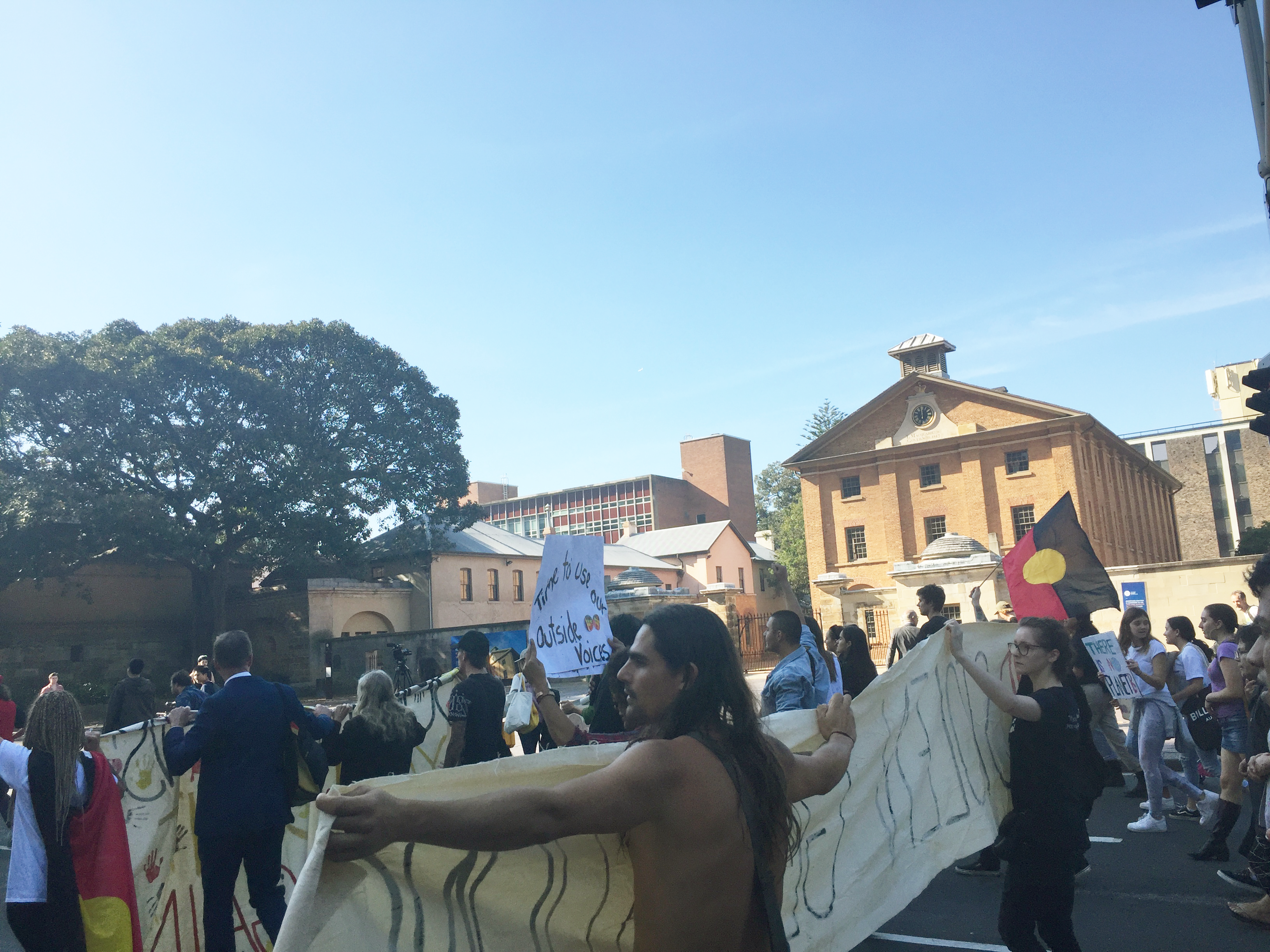 Particular attention was given to adoption laws recently passed by the NSW Government, which have made it bureaucratically easier to justify removing children from their families. The laws stop children from being able to return to their families after a period of only two years in out of home care, and have been protested by GMAR since their passing in November 2018.

Greens MP David Shoebridge spoke outside NSW Parliament House, against the laws his very own parliament passed. He has worked extensively with GMAR and other groups including Fighting In Resistance Equally (FIRE) to reform official policy.

“Since Kevin Rudd gave the tear-filled apology in Canberra, the number of Aboriginal kids taken in this state has doubled,” Shoebridge said.

“In November of last year, my workplace, the NSW Parliament passed a fresh set of laws that made it easier for First Nations kids to be taken from their families. So we need to learn the history of First Nations peoples and the collective trauma that they are suffering… We need to not just cry tears about it, we need to stand shoulder to shoulder with Hazel and Helen and fight to get their kids back, and fight to change the laws.” 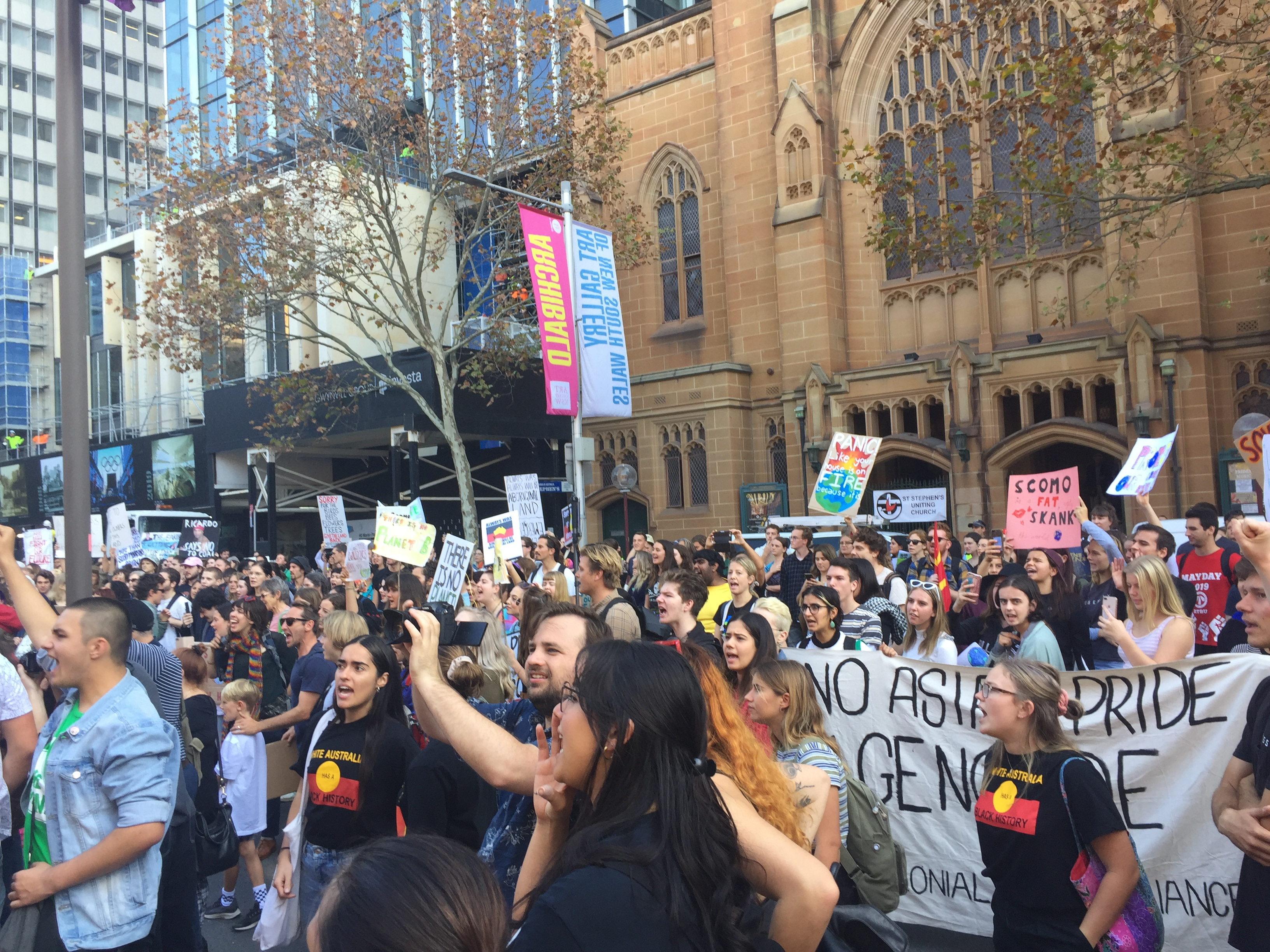 The protest made highly political calls for action. Helen Eason, daughter of Hazel Collins, began by describing the three times her children had been taken from her in recent years. She exclaimed that every time, she fought to get them back, and promised to always fight for them.

Collins spoke to the crowd about how her experiences only encouraged her to fight harder:

“We don’t fight this fight alone, we fight this with our matriarchs. Our matriarchs are the answer … Bring a new government, bring a new prime minister, we aren’t going anywhere. We will keep this [fight] up.”

The well-attended nature of the rally was especially promising, given longstanding criticisms that progressive communities tend to devote comparatively less energy to Indigenous rights actions than for other issues.

This healthy attendance was partially-attributable to the Global Strike for Future, a climate change rally held several hours earlier, which was directed to feed into the start of the Sorry Day rally. The organisers, Extinction Rebellion Sydney, describe themselves as an “international apolitical network” fighting climate change, and were supported by several student activist groups. The rally demanded governments recognise the pressing truth of climate emergency, act immediately to halt biodiversity loss and reduce greenhouse gas emissions to net zero by 2025, and create a Citizens Assembly on climate and ecological justice.As David Shoebridge emphasised to the diverse crowd, environmental justice and First Nations rights are inherently inalienable from each other, and equally political.

Bruce Shillingsworth, who gave the event’s acknowledgement of country, spoke about the pressing need to protect NSW’s waterways, currently allowed by the Coalition government to be plundered by big businesses. Such a phenomenon has left communities along the Murray Darling Darling thirsty, and reliant upon water deliveries and installation of water-filters by groups including FIRE.

“We cannot live without our natural environment, our water, our air,” Shillingsworth said.

“We need to give it back to our children in a better condition.”

Speakers ultimately impressed that the members of both rallies, as with broader Australia, need to mobilise unanimously against a broader capitalist and settler colonial system. “Stealing children and stealing water are two sides of the same coin”, Shoebridge quipped.