As Andrew Sean Greer sits down for our interview, he can’t avoid the irony of the situation. Greer is at Sydney Writers Festival talking about his Pulitzer Prize-winning novel Less, in which Arthur Less — a gay novelist approaching fifty — escapes a recent heartbreak by attending literary events in far-flung locations, getting swept up in unlikely predicaments along the way.

Less explores the absurd ways we deal with uncertainty in travel, aging and relationships. As a writer, and as someone who has lived through reincarnations of queer identity and the evolving pace of gay relationships through the years, Greer is no stranger to ambiguity.

“There’s a whole generation ahead of me that didn’t live to grow old. I saw them in their twenties dying of AIDS,” Greer says.

“They were part of a sexual revolution where they thought coupling up was participating in a heteronormative narrative. They wanted lots of lovers. My generation was the first that said, ‘We can’t do that. We have to have boyfriends and stick together.’… I would fall in love so quickly because that’s all there was.”

As Greer’s generation began to define for the first time what it meant to be a middle-aged gay man in America, they also acutely felt the confusion of losing their youth.

“Some hang on to [youth], get plastic surgery — that’s horrifying. [On the other hand,] There’s this whole new ‘bear’ category of gay men that has appeared in the last ten years, celebrating being middle-aged and manly. But I’m never going to be that.”

Greer’s protagonist Arthur mirrors these insecurities. He finds himself wanting a soulmate against the odds of circumstance, in the purgatory between the youthful gallantry and grey-haired wisdom of his former lovers. Yet Greer’s narrative voice isn’t self-pitying, nor does it indulge in existentialist dread. Less shines when it delves into uncertainty from a place of humour and joy.

“It looks like everyone has it together, but most of us can barely get through the day without some disaster happening,” he laughs.

It’s refreshing to hear such optimism in our current time of profound angst. Carrying the legacy of those who fought before, queer people now have the opportunity to remake ourselves in any way we want to be. But with so much freedom and the pressure to get it right at a young age, it’s hard not to feel doubt.

According to Greer, the best thing to do is expect that we will never have all the answers, similar to embracing the unpredictability of travel. “When the bus breaks down in the middle of a volcano and you have to figure it out, [that’s] the thing you’ll remember most, and to know that you’ve overcome it is the most satisfying thing.”

And it was through Less that Greer sought out answers for himself. “I wrote this book because I thought no one would ever read it. That gave me freedom to write exactly what I wanted to, that was not meant for the community, nor my editor, nor my agent, which was hard but liberating.”

He also wants to challenge how literature often portrays queer lives as tragedies, feeling that there was a missing space on bookshelves for “two men in love who are willing to give it a decent chance.”

“A lot of people read it like a romantic comedy, Bridget Jones or something. That says to me that people find two men in love to be utterly conventional… There is a little bit of that feeling from an old movie, of running away from the altar to the man she should’ve married all along. But a happy ending for queer people is unconventional. We don’t get that a lot.”

Less’s breakthroughs of joy and poignancy highlight both the ups and downs of being queer, while reaffirming its most wonderful and liberating parts.

“It’s so lucky that I’m gay. Because I think I’m an uptight, anxious person. It freed me. I don’t have to sit by the usual masculine standards of keeping my emotions in… no one expects that of me.”

It’s interesting that being a “bad gay” — an oddity in an inherently non-conformist space — was initially amongst Arthur’s biggest fears. But Less is an encouragement to throw caution to the wind and live a little.

“Hopefully, for any young person who has to say to the world, ‘I’m not what you thought I was, the plans you had for me are not going to happen,’ you have a chance to write your own destiny and define yourself,” Greer tells us. “For my generation, that is the greatest reward to see.” 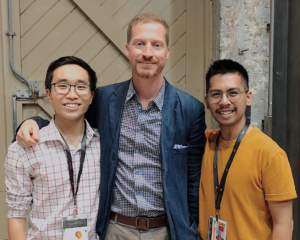 Jeffrey (Left) and Deaundre (Right) take a photo with and get a copy of ‘Less’ signed by one their favourite authors, Andrew Sean Greer (Centre).