In addition to posters being removed across campus this morning, students and staff were approached by five security officers who said they needed “permission from management” to hand out the flyers, and demanded to see their IDs.

This was just sent to us from students at the library walkway. Five UNSW security intimidating students and staff for simply handing out leaflets! It’s pretty clear how the university feels about students complaining about trimesters – (as usual) they’d rather we just shut up 😡

“In an outrageous show of censorship UNSW has proven how disingenuous their student “consultation” process has been… Instead of addressing [the unpopularity of trimesters], UNSW are concerning themselves with silencing the Cancel Trimesters campaign,” Keogh said.

Today’s events come amidst widespread student dissatisfaction with the implementation of the UNSW3+ model into the UNSW academic calendar, and popular belief that there have been inadequate attempts to seriously consult staff and students about the changes.

Hersha Kadkol, the National Union of Students Ethnocultural Officer, and featured in the video being told to stop handing out pamphlets, saw today’s censorship as “authoritarian,” and an instance of institutional censorship.

“Management would like the University to be a smooth corporate space rather than the living breathing product of the students who study here, and staff who work here,” said Kadkol.

“We resisted them today. They will probably be back, [but] this shouldn’t deter students.”

“The University can’t just bank on students rolling over and accepting [management’s decisions], they are starting to fight back.”

The Cancel Trimesters campaign was established by the UNSW SRC’s Education Office in late 2016. As a grassroots coalition of student and staff activists, it has campaigned to reverse the implementation of a trimester system. 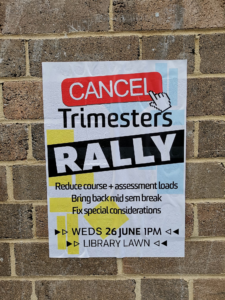 One of the major complaints is the University’s poor consultation with students and staff.

Although a student survey was completed by 5028 students in May 2016, the detailed results were never published. In 2017, UNSW’s student newspaper Tharunka asked for the results via a freedom of information request, but were denied. Tharunka was told that students’ answers were “sensitive information” that would “provide competitors with information they could use to attract staff and students away from [UNSW] to their own institutions” — harming the University’s business interests.

The UNSW 2025 Strategy Office told Tharunka that over 90% of responses were critical of the trimester change.

After a 500-strong protest and petition signed by over 2000 students were swept aside by an email from Merlin Crossley, the Deputy Vice-Chancellor Education, the UNSW Education Collective published an open letter on 15 March 2017.

The letter outlined students’ problems with trimesters, including “reductions in face to face time” with staff and increases in “online based learning,” “woefully inadequate” consultation, changes to who could still access Centrelink support, and increased mental health strain for students with less time between each semester.

Trimesters were finally implemented university-wide at the beginning of 2019.

Staff have also been considerably impacted by the introduction of UNSW3+, and have been involved in energising the campaign.

In addition to over 400 firings and significant cuts to student services made in preparation for the restructure, academics are now expected to “fit more teaching content into ten weeks and many having to extend their lectures from two hours to three hours…[Staff] also [face much tighter deadlines for marking assessments,” said Heffernan.

“Needless to say, burnout is on the rise with no time for breaks between terms as we need to start preparing for the new term of teaching immediately after finishing marking.”

Heffernan told Honi that “the response from staff towards the campaign has been overwhelmingly positive,” with many signing petitions at the campaign stall and allowing announcements to be made during lectures.

The Cancel Trimesters Facebook page, which had 818 likes at the time of publishing, is currently advertising upcoming actions, including a staff and student open forum on 12 June, and a rally at the UNSW Library Lawns on 26 June.

Honi reached out to the UNSW Media Office for comment, however did not receive a response at the time of publishing.

Honi has previously been told by the Media Office that, “we don’t have resources to provide response to enquiries from student publications.”

A UNSW spokesperson since issued Honi with an apology for all involved individuals.

“We acknowledge the incident should not have happened and apologise to the affected students. Steps have been taken to ensure that it does not happen again,” said the spokesperson.