Crowds gathered outside Sydney Town Hall on Sunday afternoon, demanding justice for the three First Nations victims of the Bowraville murders and their families, 29 years after the murders occurred.

Protesters’ cries of, “Mark Speakman hear us loud, we demand justice now!” rang through the streets of Sydney CBD, in a plea to urge the NSW Attorney General to act on the recommendations of a recent NSW Upper House inquiry quickly, and push for legislation that would allow for a retrial of the cases of the Bowraville murders.

Evelyn Greenup (4), Clinton Speedy-Duroux (16) and Colleen Walker (16) all disappeared from their hometown of Bowraville in northern NSW within a five-month period in 1990. While Clinton and Evelyn’s remains were later found in the area, Colleen remains missing.

The sole suspect of the crimes, a non-Indigenous man, was acquitted of both Clinton and Evelyn’s murders in 1994 and 2006, and the families have spent years fighting for the man to be retried, even taking the cases to the High Court, all to no avail. 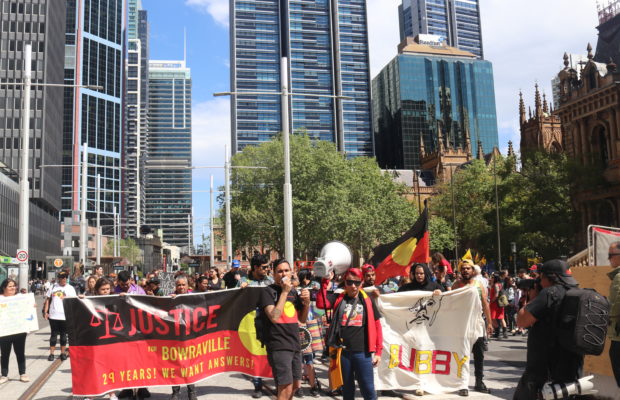 Speakers addressed the failure of the justice system and the mistreatment of the victims’ families throughout the process of seeking justice for their loved ones. Colleen Walker’s nephew spoke of how Colleen’s mother was told by police that Colleen was “too lightskin” to be her daughter when she reported her as missing. Given how little help the police were, families and communities were forced to go out in search for their own missing children.

The speeches also highlighted the clear racial discrimination present in the treatment of these cases, with First Nations activist Gavin Stanbrook pointing out, “if [the victims] had been three white children in the northern suburbs of Sydney, justice would have been swift and would have been served within days.” Later, protesters’ cries of “black lives matter” would echo this sentiment, reinforcing how little concern First Nations people’s deaths are regarded with by the Australian justice system.

It was evident that the treatment of these victims and their families is a signifier of a broader problem within Australia, regarding First Nations deaths remaining under-investigated and under-reported on, especially when compared to their non-Indigenous counterparts. Attendees of the rally were encouraged to remedy this discrepancy by posting their support with ‘#JusticeForBowraville’ on social media. The hashtag was trending on Twitter following the event.

The rally was clear in its message – the injustices faced by the victims of the Bowraville murders and their families will only be remedied if community members and activists continue to put pressure on politicians, and our legal systems.