While earlier days were filled with lively debate and participation, NatCon Day 4 was a decidedly anticlimactic end to this year’s conference. The day began with a struggle to reach a quorum (foreshadowing). Due to a motion moved on Day 3 to open the conference later than usual, Honi was only able to enter the hall past midday.

With the opening of the conference delayed significantly, our friendly neighbourhood Honi representatives touched grass for the first time in days, soaking up some of Geelong’s famed sunlight with their counterparts from ANU’s Woroni. 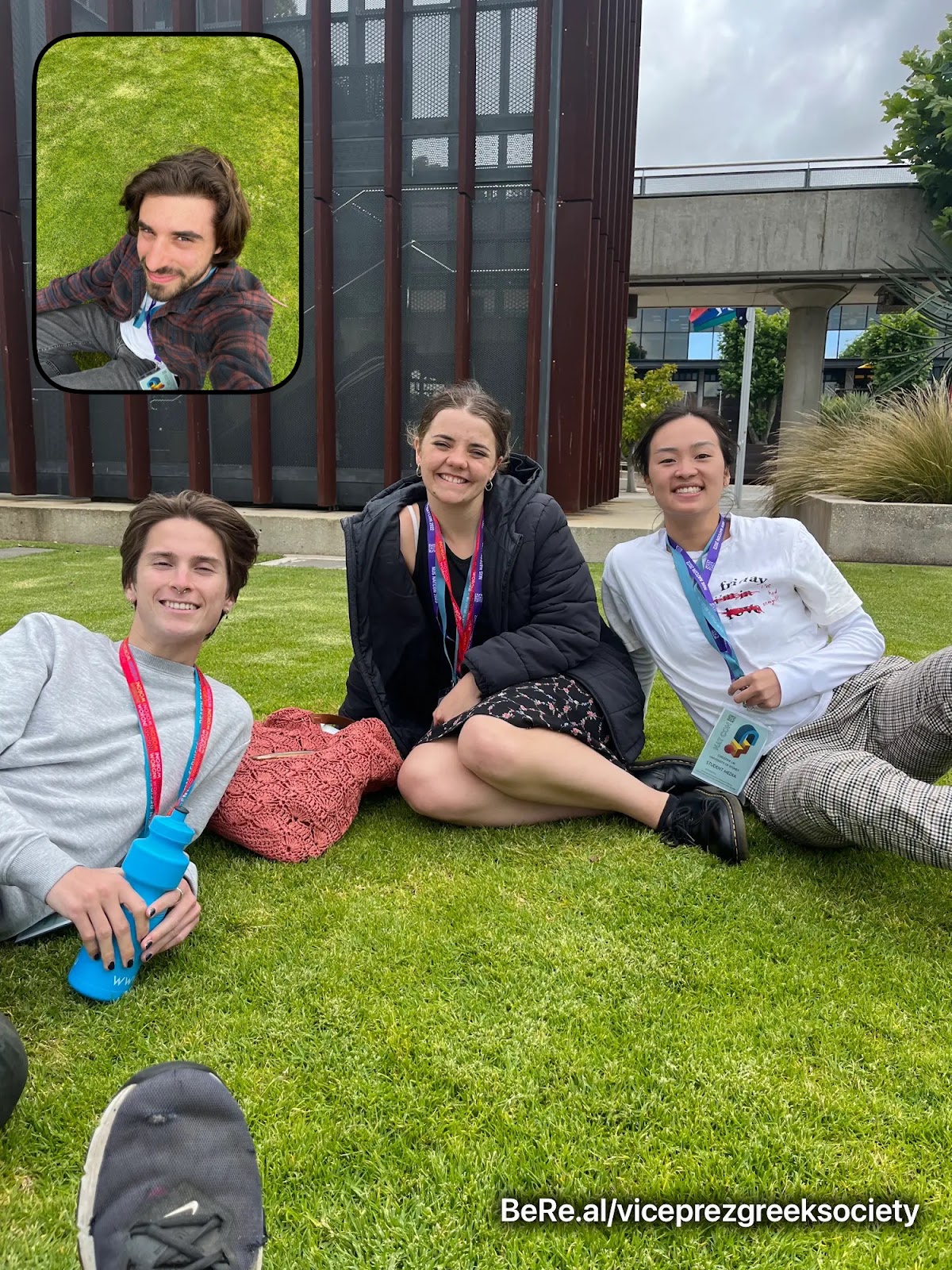 Honi is (finally) allowed in!

With a 1pm lunch break looming, any chance of significant debate was in doubt. A member of SAlt rebuked the tardiness of Student Unity, saying that the “two factions most obsessed with bureaucracy are the ones who are the worst at it”.

The first action of the day was a motion by outgoing President Georgie Beatty to close ballots for the election of the 2023 NUS Executive at 1pm instead of 3pm.

Before a series of speeches from the incoming Executive, the outgoing Executive gave their reports. 2022 Welfare Officer Billy Zimmerman (Unity) said they worked alongside Georgie Beatty to produce articles with The Guardian and GreenLeft (Socialist Alliance), emphasising the hours it took to write reports for relevant stakeholders as well. He ended his speech thanking “God, Don Farrell and the SDA”. 2022 Women’s Officer Jacqueline Price (Unity), spoke on NUS-hosted protests and increased media attention as accomplishments in their department.

Before a lunch break, the freshly elected 2023 NUS President Bailey Riley (NLS) had their first taste of delegate impropriety, naming members of SAlt three times before naming Unity who began chanting. Honi is happy to report that delegates remained characteristically rowdy once sessions resumed after lunch.

New Kids on the Bloc

Next up, speeches from the 2023 National Executive.

President-elect Bailey Riley opened, “I grew up in the shadows of Mt. Panorama and moved to the big smoke to go to UTS, and I’m proud to be your next NUS Pres.” Riley, while emphasising the importance of the Accords, responded to a heckling SAlt member by yelling “shut up, white bitch”.

2023 General Secretary Sheldon Gait (Unity) said, “So many of the issues we face as students stem from the federal government.” SAlt cheered in response. Gait praised Labor’s pragmatism, citing the NDIS, Indigenous land rights, HECS and superannuation as Labor wins.

2023 Education Officer Xavier Dupe (SAlt) was highly critical of Labor in their speech. Harking back to a motion by NLS and Unity to prevent the NUS Ed Officer from opposing Labor’s Higher Education Accords, Dupe said that they would condemn the Accords, “We need to be clear about who our enemy is, and that is the Labor government.” Once again, Dupe persisted with SAlt’s demand for Bailey to film herself condemning the Religious Discrimination Bill 2019.

Grace Franco (Unity) gave their speech as Welfare Officer-elect. “We should not have to live in the shitstorm left behind by previous governments,” said Franco, outlining their vision to campaign and “work with groups on the ground”.

Incoming Queer Officer Grace Hill (SAlt) expressed a desire to run a campaigning against the Religious Discrimination Bill, urging delegates, “join us or..extend your hand to the religious right.” After heavy lobbying from SAlt, Bailey Riley (NLS) finally signed the cog for the NUS to ‘commit to an activist campaign against any Religious Discrimination Bill proposed by Labor, Liberal or any other party’. Damien Nguyen (Groots) also expressed their support for organising against the bill in their speech as Queer Officer-elect.

2023 Ethnocultural Officer Ben Naiju (Unity) thanked NLS and Unity for their support this year, expressing their eagerness “to work across all factions to achieve the pragmatic vision we want the NUS to deliver”.

2023 First Nations Officer Patrick Taylor (Unity) spoke on the importance of the voice to parliament. They received a standing ovation from Student Unity. The speeches ended with 2023 Vocational Education Officer Salwa Kilzi (NLS).

Honi can only really call what follows a ‘shit-show’.

After a procedural motion passed with the support of NLS and Unity that SAlt was unaware of, SAlt and Indies threatened to leave and pull quorum to stop the conference. Unity and NLS blindsided the other factions by rushing a procedural motion to a vote. Emily Sagolj (Unity) took over as chair without authority meaning Honi and our other student-media friends were unable to take down the series of motions before Unity and NLS delegates threw their lanyards up and tried to pass it.

Groots complained about how “[Unity] has probably moved multiple hours of jokes… we just want to make a political argument”, and an Indie heckled, “What is the point of spending all this money on this conference if it’s just a farce!”

SAlt and Indies walked out after the procedural to block a series of illegitimately passed motions, rendering the conference inquorate. Outgoing NUS President Georgie Beatty (NLS) stripped the microphone from Sagolj’ hands and condemned the actions of Unity and NLS alike. The Labor bloc chanted, “GIVE US DEAGLAN, GIVE US DEAGLAN!”

Guleid Abdullahi (Unity) told Honi, “This really is a shitshow.” Beatty called a re-vote for the contentious procedural motion along with a series of procedurals to cajole SAlt and the Indies to return and quorum was restored.

Delegates finally returned to discuss motions as Beatty passed a procedural determining how the rest of the day would work. Beatty told the Grindies, “you weren’t in the room where it happened, but every other faction has signed this”, exposing herself as a Hamilton stan.

Delegates discussed a motion to oppose Citipointe Christian College’s infamous sexuality contract which required families to denounce homosexuality amongst other queerphobic requirements. Delegates once again expressed a strong commitment to mobilise against the Religious Discrimination Bill.

Then followed a series of motions on regulations changes. This included a motion on who is eligible for Returning Officer, and another to prevent financial mismanagement as was seen in the embezzlement scandal earlier this year. The latter failed with SAlt preventing the 75% vote needed to pass a regulations change. A motion was proposed to allow the National Executive to recommend the removal of an OB ‘by resolution passed by two-thirds majority.’ This failed as other factions objected to a proposal which would favour the Labor factions who hold more than two-thirds of the Executive.

Though delegates were scheduled to consider urgency motions, quorum was lost for the third… fourth time? (Honi has seriously lost count). Amidst the confusion, outgoing NUS President Georgie Beatty eventually approached the lectern to declare the conference permanently inquorate, ending the 35th National Conference of the NUS.

That’s a rather disappointing wrap on Honi’s coverage of NatCon 2022. Stay tuned for our in-depth post-conference analysis!