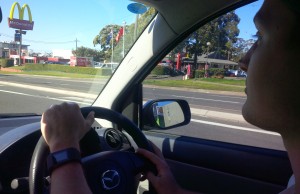 It is one of life’s unspoken truisms that every house has a signature scent, a bespoke homage to the people inside. The same is true of people’s cars. Let’s call it “abode-scent”.

The house of a primary school acquaintance of mine had a fish sauce abode-scent. The car of a kid on my soccer team had a sweaty abode-scent, somehow intensifying when the air-conditioning was turned on. Everybody aims for a neutral abode-scent, but very few achieve it.

Ben is no exception. His 2004 Mazda 2 has a soapy abode-scent. Nothing too foreign or floral—think Sunlight or Palmolive Gold. There is a very straightforward explanation: Ben’s hot hatch houses three air-fresheners.

Straddling the dash air vent is a purple Airwick. Dangling from Ben’s rear-view is an oval-shaped freshener, courtesy of the good people at Hornsby Auto Service. The third culprit casts a misleading pine tree-shaped silhouette as it swings from the grab handle atop the rear passenger-side door. It is supposed to emit “New Car Scent”.

According to Ben, most people think that his car smells like a public toilet. And it is this self-deprecating sense of humour that I quickly warm to when Honi road tests Ben’s 2004 Mazda 2. Our journey will take us from Cumberland Campus to Main Campus via Rookwood Cemetery and the Hume.

Ben calls his Mazda “Pup” or “milk carton”. I cannot make sense of the latter at first, but then Ben explains that his automobile’s boxy form resembles a 250mL Moove carton rather than the 3L bottle I had envisaged.

A physiotherapy student, Ben’s beamy countenance and penchant for all things athletic are well-reflected in Pup’s interior. Whereas other cars might have leather or faux-walnut inlays, Pup’s trim is cut from Asics trainer mesh.

Plasticity is the best word for “the cockpit”, what Ben calls the driver’s seat (he also speaks of Pup having done 153,000 “clicks”). Plasticity, not only because grey plastic dominates the centre console, but because Ben has been plastic in fashioning adaptations to overcome the 2’s design flaws. No money tray? No worries. Ben has placed a cylindrical money box in the cupholder. No sunglasses holder? Ben cleverly uses the recess under the handbrake to stow his shades.

The first few kilometres of our test drive take us through the testing esses of Rookwood Cemetery. Shady pines line the road and the morning sunshine dapples the dashboard. Quite a pleasant drive, were it not for the stark reminder of human mortality at every turn and the incessant hammering of the undertaker’s Bobcat.

The car’s steering is very responsive, typical of Japanese hatches. The ride is firm, if a tad too much so at times. Speed humps litter the cemetery, opportune for testing Pup’s suspension. We traverse two or three humps when I begin to hear a suspect rattle from the rear axle. I question Ben. “Na, that was the crane”, is his response. I am not entirely convinced—“Are there always cranes about when you drive over speed humps?”. Ben dismisses my test of his faculties and assures me that vehicle maintenance is performed thoroughly and regularly.

Ben is the youngest of four and every one of his siblings learned to drive in Pup. Rather surprisingly, Ben’s haunches are the fifth pair to warm the driver’s seat. Ben’s parents purchased Pup off an elderly lady who clocked up a mere 10,000km. Ben doesn’t say it, nor does he indicate it in any meaningful way, but there is a silent understanding between us that his family took full advantage of the elderly seller’s difficulty appropriating car sale prices to the post-war era.

Being the “training wheels” for Ben’s family, Pup has a colourful history, of which any prospective buyer should be aware: two rear-enders, a front “smooch”, a dent over the left rear door, gaffer tape holding on the front bumper and an electric side mirror that needs to be adjusted by hand.

Perhaps the most telling feature of any automobile is its horn. Pup’s horn is bright and buzzy; nonchalant. It’s not a horn of frustration, but of invitation.

The 2’s horn is harmless, a mantra that extends to occupant safety. The ’04 Mazda 2 has an ANCAP safety rating of 4 stars and an “Excellent” score for the protection of other road users. Pup is fitted with optional side and curtain airbags. She has ABS, but not traction control. Radio volume adjustment buttons have taken the place of cruise control toggles on the steering wheel.

One of Pup’s features unsettles your correspondent. It does not sit well with Ben either. The penultimate radio volume level is 33. Then it clocks over to MAX, implying 34 is the maximum volume level. Why such an arbitrary number to max-out on? Multiples of 5 or 10 are the industry standard.

The plan was a photoshoot out the front of the Quadrangle Building. We forget that bollards prevent access from Science Road and must turn back the way we came. Classes have just finished, pedestrians are swarming our vehicle and traffic is banking up behind us. I grow stressed, fearing a 75-point turn imminent. Thankfully, Pup’s super-tight turning circle makes light work of the U-turn. We skedaddle off on our merry way.

Exiting via Western Ave, I quiz Ben on the 2’s economy. By his account, Pup is quite efficient: he fills up once a week for $35-50, which lasts him around 400km.

A nifty little buzzbox that reliably takes Ben from point A to B, and occasionally point C. Optional safety extras, an excellent service history and Ben’s conscientious driving style all make this vehicle an attractive package for the bargain-hunter. What is lacks in grunt it makes up for in character. 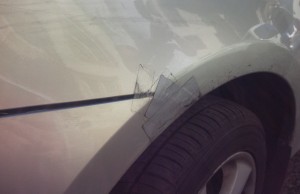