The position of Wom*n’s Officer is set to be contested at the SRC representatives elect (Repselect) meeting on 1 November, despite the SRC traditionally electing candidates preselected by the Wom*n’s Collective (WoCo).

Crystal (Zifan) Xu, from Panda, may run for the position, although she does not meet the eligibility requirements to run for the Wom*n’s Collective preselection, which will be held next week.

The Wom*n’s Collective have today voted to keep their current voting regulations in place. President-elect Jacky He brought a proposal to Wom*n’s Officers Jessica Syed and Madeline Ward earlier this morning, asking the collective to “scrap its voting regulations and constitution in order to allow any [undergraduate] student to vote,” according to Ward.

The collective rejected the proposal because they viewed it as “a concerning attempt by men to intervene in the democratic processes of a collective that is composed of women and non-binary students,” Ward said.

The Wom*n’s Officers said He offered them a “sweetener”: that Panda would respect collective autonomy at Repselect if the voting regulations for Wom*n’s Collective preselection were scrapped.

Current voting regulations were re-affirmed at WoCo’s meeting last week, dictating that members will only be eligible to run for the role of Wom*n’s Officer or vote for a candidate if they have attended two meetings (or if they have attended one meeting, an event and have contributed to a WoCo publication).

The anti-stacking regulations are not enshrined in the SRC constitution but have been in place for at least the past four years. Traditionally, the SRC Council has respected ‘collective autonomy’ at Repselect.

Panda and the Liberals, who supported Jacky He for president, are likely to wield 18 votes—enough for a simple majority to secure the Wom*n’s Officer position at Repselect. He confirmed to Honi he had spoken to Ward prior to the meeting and was “unintentionally told about the date and time”.

First-year student Gabi Stricker-Phelps, daughter of Independent candidate for Wentworth, Kerryn Phelps, who ran with the Liberals on a Shake Up ticket, was reportedly interested in the position. Honi understands that Phelps, who is also not eligible to run for collective preselection, may no longer be in the running.

In a statement released tonight, Syed and Ward said they were “dismayed that certain campus factions have actively decided to disrespect an understanding of collective autonomy”. They said the collective would “not tolerate attempts at interference from men” in the outcome of the autonomous preselection process. Syed and Ward confirmed to Honi that this man was He.

Syed and Ward would not elaborate on the particulars of today’s meeting, such as attendance or vote count, as this would constitute “breaking collective autonomy”. Today’s meeting was scheduled to elect a Returning Officer.

Xu, who ran on Panda for Female Leadership, did not respond to Honi’s request for comment. At this stage, she has not directly confirmed whether she intends to run.

He said that Xu cares deeply about international female student issues and “for someone with those genuine and practical thoughts, she would be a suitable candidate for the role”.

“Crystal’s policies are all about empowering women by cultivating leadership… breaking through those glass ceiling, glass walls and glass doors that have been caused as a result of misogyny in the past.”

He said Xu was “a little bit upset” after the meeting but declined to elaborate further. 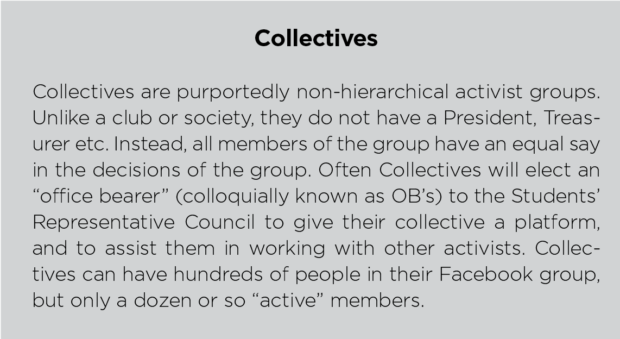 In 2016, Andrea Zephyr from Unity broke collective autonomy by challenging two Grassroots candidates, Imogen Grant and Katie Thorburn, who had been preselected by the Wom*n’s Collective.

Last week, the Collective added a clause to their voting eligibility requirements to allow students who did not attend two meetings, but were involved in  a rally, painting banners, an Eastern Avenue stall or a WoCo publication, to be eligible to vote and run. They also added an affirmative action clause stating that one of the two Wom*n’s officers must be a woman of colour. If no woman of colour nominates for the position, one of the two officers must have an intersection of oppression.

The Wom*n’s Officers are paid $12 000 by the SRC when splitting the position between two people, as is customary. If Panda and the Liberals hold the majority, they may choose not to split the position.