Historical Materialism Sydney Conference attendees boycotted a panel today, featuring controversial academic Dr Caroline Norma, who has been widely criticised for transphobia and anti-sex worker rhetoric. Originally scheduled on a panel of three, her two fellow presenters requested to be placed in different rooms, such that Norma spoke on a solo panel.

The action was led by conference presenter Riki Scanlan from the University of Sydney, who posted an open letter to Caroline Norma in the conference’s Facebook event late on Tuesday 11 December. 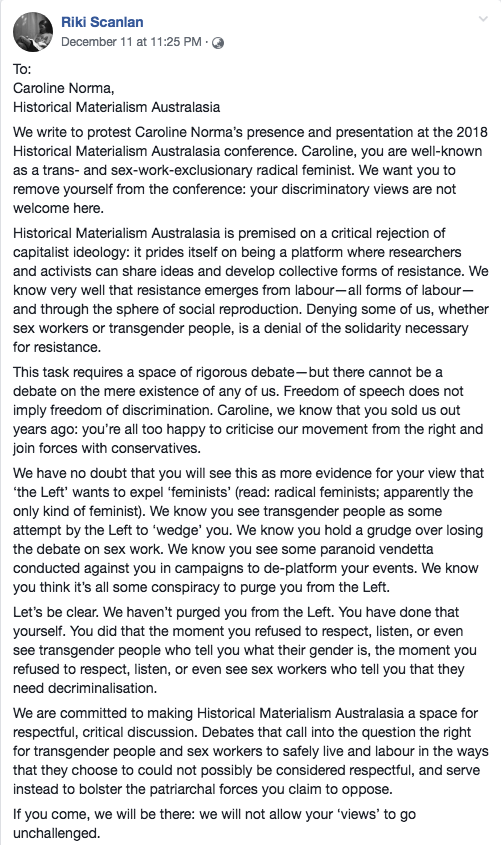 Historical Materialism Sydney is a Marxist research conference that has run over the past seven years. It has served as a space for academics to present papers that “deal with [anti-capitalist] themes or any other topics that engage with historical materialist thought” in a number of fields.

Scanlan’s letter asked for the removal of Norma, defending the conference as a progressive safe space for political, Marxist discussion. It condemned debates singling out vulnerable groups and called for inclusive ideals.

“We are committed to making Historical Materialism Sydney a space for respectful, critical discussion,” the letter read. “Debates that call into question the right for transgender people and sex workers to safely live and labour in the ways that they choose to could not possibly be considered respectful, and serve instead to bolster the patriarchal forces you (Norma) claim to oppose.”

The open letter made reference to a 2015 article published by the ABC titled ‘Transgenderism: The Latest Anti-Feminist Wedge of the Left’. In the piece, Norma argues that transgender identities have been created by ‘the left’ in order to isolate older feminists like herself from academic and organising spaces.

The open letter also took issue with the content of her presentation held today, ‘Keeping alive the myth of property in  the person: Prostitution in today’s capitalism’, according to the conference schedule.

“Prostitution as both an act and an institution is seen by radical feminists as socially establishing and reproducing the sex classes of women and men,” Norma read at her panel.

Norma, who is a lecturer at RMIT University in Melbourne, has been vocal about her opinions on the political status of sex workers on various media outlets and has publicly opposed calls to decriminalise sex work. She seemingly follows the ideology of transgender exclusionary radical feminists (TERFs),and sex worker exclusionary radical feminists (SWERFs), who are staunchly against the sexualisation of “vulnerable people” and call for the criminalisation of the sex work industry — widely considered a controversial and a counterproductive policy.

In further comments to Honi, Scanlan explained that in advocating for the criminalisation of sex work, Norma is acting to “directly counter the demands of sex workers and sex worker unions in Australia today…  [which] would directly lead to harm.”

The open letter calling for the removal of Norma from the panel was signed by 55 students from various factions and degrees as well as high-profile figures including Lee Rhiannon, a former Greens MP, Imogen Grant, the immediate past president of the USyd Student Representative Council, and Philip Roberts, an associate lecturer at the University of York.

Following the open letter, and at their request, other presenters were placed on different panels. Norma thus spoke on a solo panel, chaired by a conference organiser.

The organising committee of the conference declined to comment to Honi on any scheduling changes made. Honi has reached out to the USyd School of Social and Political Sciences for comment.

Honi understands that the conference is intended to be an inclusive academic space, historically adjudicating essay abstracts on their relevance to Marxism, and is constrained by how much space is made available for speakers. The conference is run in a non-hierarchical manner by an organising committee of political-economics academics, and activists. Pitches are rarely knocked back, and no one has ever been banned from presenting.

When Norma was not excluded from the conference, attendees instead largely chose to boycott her solo presentation. The Historical Materialism Conference in Sydney had 90 attendees today, with around 150 people expected to attend in total over the course of the two-day conference. Norma’s panel had only 10 attendees, two of whom left within the first few minutes, whilst the other three panels occurring in the same time slot had 23, 27 and 20 people in attendance respectively.

Daniel Cotton, a boycotter at the event, told Honi that they condemn Norma’s transphobia and that her support of authoritarian policies is tantamount to siding with the conservative Christian Right.

“This conference should be about theorising, understanding and challenging sexism. But the approach of people like Norma is undercutting that fight.”

The protest against Norma comes at a time when standards of freedom of speech have been highly contested. The issue has prompted the Federal Government to carry out a review into Freedom of Speech on university campuses.

Earlier in the year, USyd students protested controversial commentator and sex therapist Bettina Arndt. After being allowed to speak by the university, Arndt was met by students outside the event who took issue with her questioning the validity of a campus rape epidemic.

Another Usyd academic and senior lecturer,  Dr Tim Anderson was suspended last week over the “offensive” content of his lecture slides. Anderson included an image of an Israeli flag, partially altered to include a superimposed swastika. Since then, the National Tertiary Education Union have released a statement in support of Anderson’s right to academic autonomy. Anderson will meet with the University’s Review Committee later this month.