This afternoon, around 350 protestors marched from Taylor Square to Martin Place, demanding the withdrawal of bills that enable discrimination against LGBTQIA+ people within certain social settings like schools and workplaces.

The ‘Kill-the-Bill’ demonstration, organised by Community Action for Rainbow Rights, was chaired by activists April Holcombe and Patrick White.

The protest was directed against One Nation member Mark Latham’s ‘Parental Freedoms Bill,’ which proposes a ban on schools accommodating gender diverse students, as well as Christian Porter’s ‘Religious Discrimination Bill,’ which would permit LGBTQIA+ discrimination on the grounds of religious beliefs in certain areas of public life.

Holcombe provided an Acknowledgement of Country before the first guest speaker Mark Gillespie took the stage. As a participant in the first Sydney Mardi Gras in 1978, Gillespe highlighted the need for action in NSW today, “We were vulnerable then and we remain vulnerable.”

“It is a teacher and school’s responsibility to create a safe space for students no matter how they identify. And no law should interfere with that,” they said. “To prohibit school counsellors from affirming trans and gender-diverse students and not be able to offer them support or referrals is evil.” 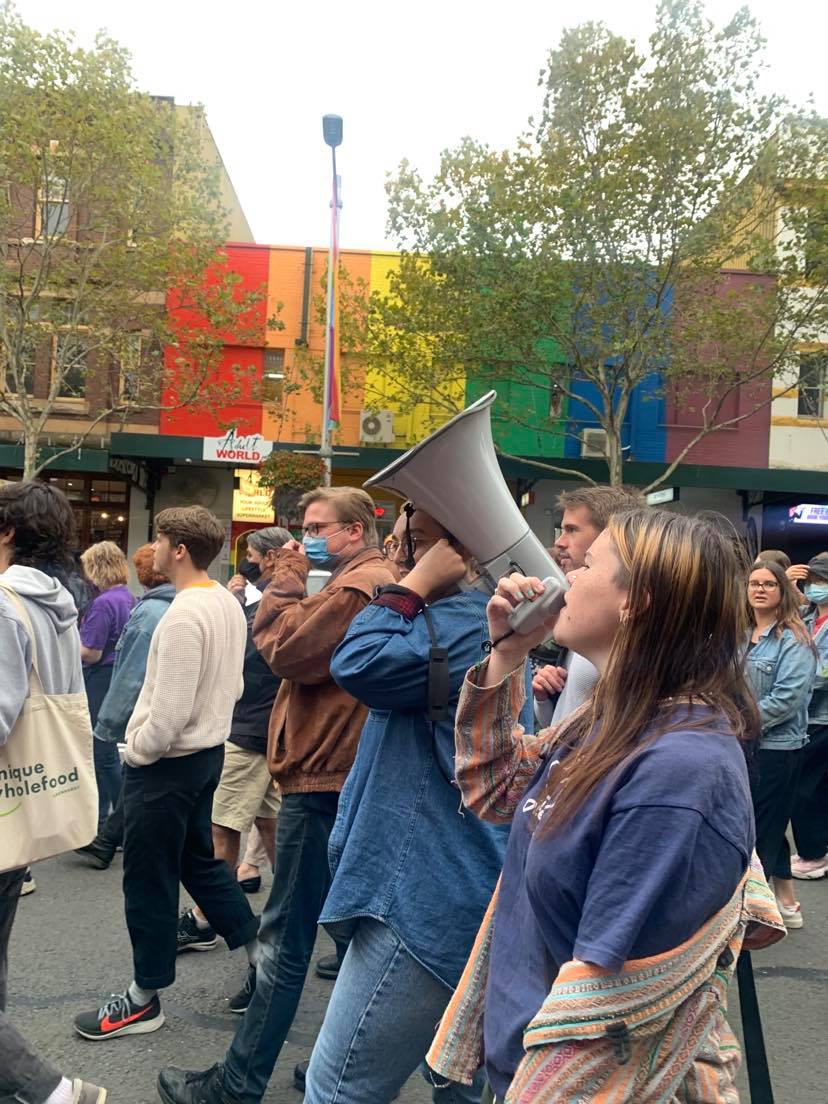 Holcombe then presented David Shoebridge, Greens MP and member of the committee looking into Latham’s bill.

Religious voices opposing the Parental Freedoms Bill, including the Uniting Church, have been excluded by Latham from being heard by the committee. “That shows you this committee is not designed to get to the truth,” says Shoebridge.

Radhika Sukumar-White, Minister of Leichhardt Uniting Church, was welcomed onto the stage to speak out against the exclusion and vilification of LGBTQIA+ individuals by the church, and express her community’s commitment to fighting for their rights.

“I am an ally not despite my faith … but as an expression of those things,” said Sukumar-White. “The truth is in Australia, Christians are not persecuted,” she added. “And it is disingenuous to suggest otherwise.”

Following this, Darcy, a transgender highschool student, spoke about the lived experience of gender-diverse students in schools: “We face bullying and isolation from our own peers,” they said. “And now we have to face that from grown adults too.”

They spoke on the need for proper mental health support for trans and gender-diverse students, and facilitating transitions. “You wouldn’t stop a doctor from mending a broken arm just because the parents believe that bones can’t break,” they said.

Another demonstration has been called by CARR on June 5 to oppose the bills.