The Senate Select Committee on Job Security has criticised ‘corporatised’ universities for their ‘unacceptable’ failure to address rampant casualisation in the higher education sector. The comments were made in an Interim Report delivered on Wednesday, which called for better pathways to permanent conversion, improved reporting practices and recommended that government funding be tied to commitments to reduce casualisation.

The committee, chaired by Labor Senator Tony Sheldon, heard that casualisation had negative impacts on academic freedom, the student experience, and the wellbeing of casual employees.

The committee’s comprehensive criticism of universities over their employment practices comes less than a fortnight after universities were given a severe slap down by the Fair Work Ombudsman over underpayment, wage theft and their embrace of insecure work.

The committee was presented with data which demonstrated that rates of casualisation had increased exponentially compared to permanent positions, which had remained relatively stagnant over the past two decades. 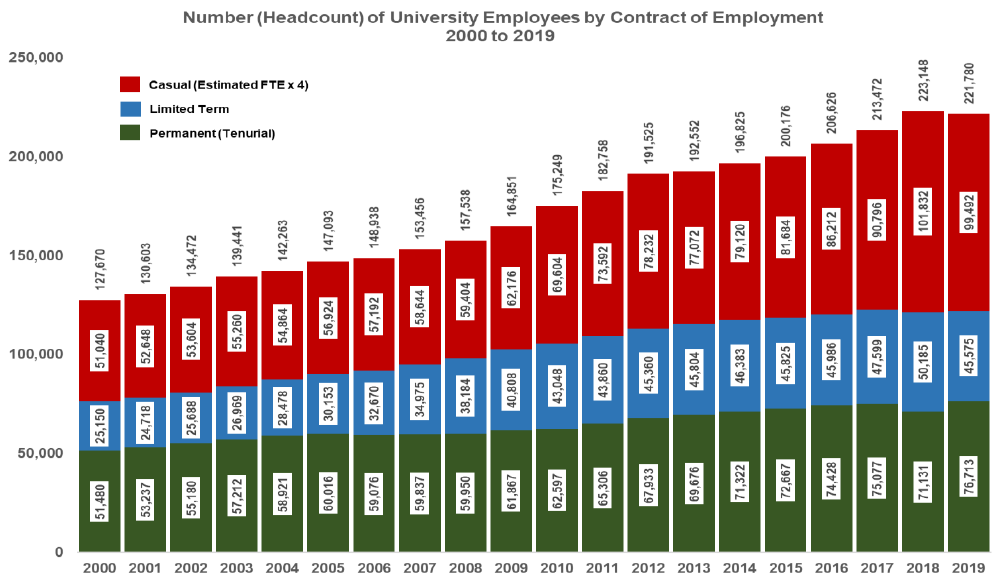 The committee found that this disparity could be attributed to a decline in public funding, and an unwillingness from university to provide ‘high-risk’ employee protections.

“From a university management perspective, greater employee protections that apply to permanent academic staff means that a high-risk cost applies to any appointment made on a continuing basis,” the committee found.

By contrast, … “casual staff are quick and easy to engage and terminate when compared with fixed-term or permanent staff.”

Casual academic staff told the committee that their employment conditions “means insecurity — of employment, income and lifestyle.” Instances of casual staff working while severely sick were raised, while others testified that precarity pervaded all aspects of life, impeding “the ability to take opportunities such as marriage, family and, increasingly, retirement planning.”

Academics also raised concerns over the impact of insecure work on career development, with the committee noting that casual academics were denied the opportunity to research and publish work while on hourly teaching-only contracts, thereby limiting their future ability to progress in academia.

The committee also expressed concerns over insecure work’s impact on academic freedom: “Academic freedom is weakened by insecure work as casual employees, who are not afforded employment protections, may feel speaking up on controversial topics will compromise their employment.”

Notably, the committee recognised that “piece rates commonly grossly underestimate the time required to complete marking work, which has resulted in rampant underpayments,” as the University of Sydney recently asserted that time spent doing administrative tasks and marking papers outside of set piece-rate allocations did not constitute underpayment.

Such  a view leaves USyd increasingly isolated, with both the Senate Committee and the Fair Work Ombudsman criticising the wage theft inherent in unrealistic piece-rate time allocations.

The committee recommended that the government provide temporary additional funding to reverse the damage caused by COVID-19, that funding be linked to permanent employment targets, and that government develop uniform reporting practices for universities so that true levels of staffing and casualisation can be properly understood and reported.

The full report can be read here.