In recent months, staff-led campaigns at RMIT and the University of Newcastle have pushed out Chancellors who respectively chaired gambling and mining companies. In both cases, staff, with the support of the NTEU, argued that leadership of companies in such exploitative and harmful industries was repugnant to the “values” of their universities.

The departures of Ziggy Switkowski and Mark Vaile raise the question of whether a new ethical standard for university chancellors is developing. In the legislation which governs Australian universities, including the University of Sydney Act, members of university governing bodies (such as the Senate) are required to have “an appreciation of the object, values, functions and activities of the University.”

In comments to Honi, NTEU National President Alison Barnes said that “the NTEU believes that university leaders have both an ethical and legislative obligation to demonstrate their commitment to supporting the values of their universities….as important institutions that provide social benefit and perform public good.”

The University of Sydney’s Belinda Hutchinson is front of mind in any discussion about chancellors and ethics. When not performing her duties as Chancellor, Hutchinson also acts as the Chairman of Thales Australia, the local arm of French-owned global weapons manufacturer Thales Group, which has a far from perfect ethical record.

Thus, the question must be asked: what are the values of the University, and is Belinda Hutchinson compatible with those values?

The University lists four official values on its website: courage and creativity; respect and integrity; diversity and inclusion; openness and engagement. Shucked of meaning, and couched as corporate comms from an HR pro forma, it is difficult to ascertain what these substantively refer to. In these values, there are no references to scholarship, knowledge, research, or public service, only vague incantations to “encourage each other to explore further” and “advocate for all to realise their full potential.” The only near-substantive value statement from the University — its recent motto of ‘Leadership for Good’ — comes from its marketing department.

Thus, the University’s own current conception of its values is far from the classical ideal, and aligns more closely with the corporate world.

Which brings us to Belinda Hutchinson. While Hutchinson has no experience working at a university, or indeed any academic experience beyond a Bachelor of Economics, she has an extensive corporate CV, with blue-chip directorships at Qantas, Coles Myer, QBE, Energy Australia, and, less reputedly, Tabcorp, Australia’s largest gampling company. In 2013, in her first year as Chancellor, Hutchinson resigned as the Chair of QBE’s board as the company posted a $280 million loss, far from expectations of a $1 billion profit that year. According to The Australian, “The company’s credibility was shot and serious questions asked about its processes, culture and acquisitions.”

But in every corporate career, one has their missteps. Hutchinson’s corporate credentials are proven beyond doubt by the fact that she wrote the Australian foreword to Sheryl Sandberg’s infamous Lean In.

At the top end of town, Hutchinson is extremely well connected. Even beyond the corporate world, Hutchison and her husband Roger Massy-Greene, a climate change denying former mining executive and Liberal Party donor, own the most expensive apartment in Australia’s most expensive suburb, Point Piper, just down the road from Malcolm Turnbull and UNSW Chancellor David Gonski, and amongst Sydney’s deepest pockets.

In comments to Honi, the University praised Hutchinson and emphasised her record of philanthropy: “She was awarded the country’s top honour, a Companion of the Order of Australia, in recognition of her eminent service to business, tertiary education and scientific research, and for her philanthropic endeavours to address social disadvantage.”

Hutchinson sits on a number of not-for-profit boards, including Australian Philanthropic Services and St Vincent’s Health Australia’s NSW Advisory Board, and “her family foundation supports a variety of community-based initiatives such as the Hunger Project in Malawi, Africa.”

While Hutchinson and her husband do have a consistent record of philanthropy — including a donation of $50,000 to St Paul’s College in 2019 — such initiatives would be a minimum expectation for a couple of such wealth. In one deal alone in 2006, Massy-Greene fetched $124.5 million when Excel Coal, the company he chaired, was bought for $1.8 billion.

In 2015, Hutchinson was appointed Chairman of Thales Australia, the local subsidiary of French-owned Thales Group, the world’s eighth largest arms manufacturer. Putting aside the obviously murky ethics of weapons manufacturing in the first place, Thales has a distinctly mediocre moral record. In the last five years alone, it has been the subject of corruption and bribery indictments, been complicit in international humanitarian law violations in Yemen, and is the subject of a complaint to the International Criminal Court.

In South Africa, the corruption trial of former President Jacob Zuma is due to resume this week. Zuma is facing charges of fraud, racketeering, money laundering and corruption in relation to allegations that he and Thales were involved in “an organised criminal enterprise” between 1995 and 2001. According to prosecutors, Zuma, during the period he was National Chairperson of the African National Congress and Deputy President of South Africa, agreed to accept hundreds of payments from Thales in return for providing the company “political protection” and “ensuring there was no investigation” in relation to a controversial arms deal. Thales itself is also facing ongoing racketeering, money-laundering and corruption charges in South Africa for its alleged bribery of Zuma.

In France, the former head of Thales Asia, Bernard Baiocco, and former Thales Group CEO Jean-Paul Perrier have been indicted over allegations of corrupt payments to former Malaysian Prime Minister Najib Razak in relation to a 2002 submarine deal. The two are accused of involvement in the payment of millions of Euros in kickbacks to an associate of Razak’s, Abdul Razak Baginda, in order to secure the deal. One payment, to a company controlled by Baginda’s wife, totalled 114 million Euros. The affair first came to light in 2006, when Mongolian model Altantuya Shaariibuu, with whom Baginda was having an affair, was shot dead and her body blown up near Kuala Lumpur. It has been suspected that the murder was linked to her work as a translator on the submarine deal. Two police bodyguards have been convicted over the murder. Baginda was acquitted in 2008 after standing trial for abetting the murder, while suspicions of Najib Razak’s involvement persist.

Thales has come under scrutiny for providing arms to Saudi Arabia and the United Arab Emirates, both of whom have been accused of war crimes in the ongoing conflict in Yemen. Last week, the UN Group of Eminent Experts on Yemen presented a report to the UN Human Rights Council, which found that “parties to the conflict continue to engage in serious violations of international human rights law and international humanitarian law.” The report also called for states to “stop providing arms and military support to the parties given the role of such transfers in perpetuating the conflict and potentially contributing to violations.”

Thales Group manufactures the Damocles Targeting Pod, and sells the product to Saudi Arabia and the UAE, which use the pod in bombing raids in Yemen. The pod is attached to fighter jets, and allows the pilot to “guide by laser any type of missile onto its target.” According to the French Directorate of Military Intelligence, the Saudi-led coalition carried out more than 24,000 airstrikes in Yemen between 2015-2019, causing more than 8,300 civilian deaths. 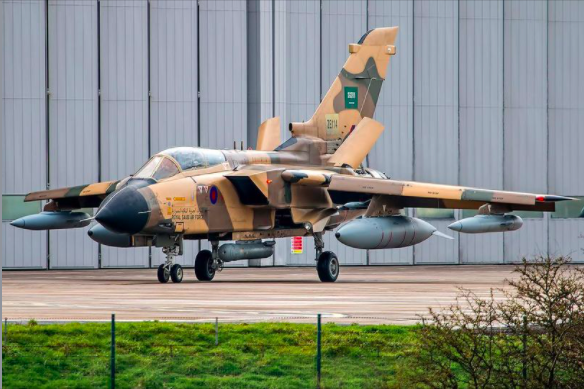 Thales is the subject of a complaint to the International Criminal Court by the European Centre for Constitutional and Human Rights and Amnesty International over their supply of products that are used in the Yemen conflict. The complaint says that “European companies [including Thales] have substantially contributed to the aerial warfare carried out in Yemen and, as a result, may be potentially complicit in the Coalition’s serious violations of international humanitarian law, some of which amount to war crimes.”

Melissa Parke, Australia’s former Minister for International Development and co-author of the UN Group of Eminent Experts report, told Honi that “the flow of weapons to warring parties in Yemen is perpetuating the conflict and the extreme suffering of the Yemeni people.”

While Thales Australia is a separate legal entity to its parent company, and is not itself the subject of any complaints, concerns have been raised over its sale of MRAP ‘Bushmaster’ vehicles to Kopassus, an Indonesian army special forces group which is accused of human rights violations in East Timor and West Papua.

Melissa Parke further told Honi that “It is concerning to note that the Australian Chairperson of one of these arms manufacturers [that supply the Saudi-led Coalition] is also the Chancellor of one of Australia’s most prominent public universities. The University may wish to reflect on whether this is consistent with its expressed commitment to human rights.”

When asked why it was appropriate for her to be leading USyd, a spokesperson for Hutchinson told Honi that she “is recognised as a leading advocate for the critical role of world-class education and research.” If the main qualification for being a Chancellor is being an “advocate” for education, then any schmuck could do the job.

As the University itself says, the role of Chancellor is “to ensure our high standing in the wider community.” Being Chair of the local branch of a company which is caught up in multiple large-scale international bribery scandals, abetts human rights violations, and is the subject of a complaint to the International Criminal Court does not ensure the University’s high standing in any community beyond Point Piper. It substantially detracts from it.

If Mark Vaile and Ziggy Switkowski were not seen as good enough to lead a public institution, it is difficult to see how the chair of an arms company can display a proper appreciation of the values of a university.

Belinda Hutchinson should not be the Chancellor.