Honi Soit on Wednesday morning received photographs of graffitied messages such as “dismantle the colleges” and “fk college” across campus.

The slogans were spray painted at various locations, including the wall of St. Andrew’s College along Carillon Avenue and the footpath leading up to Wesley College. Although the people responsible are unknown, there is good reason to believe the graffiti is linked to findings of the recent End Rape On Campus ‘Red Zone’ Report, which exposed hazing practices and high instances of sexual assault at USyd Colleges. Specifically, the report found that one in eight sexual assaults occur during OWeek. 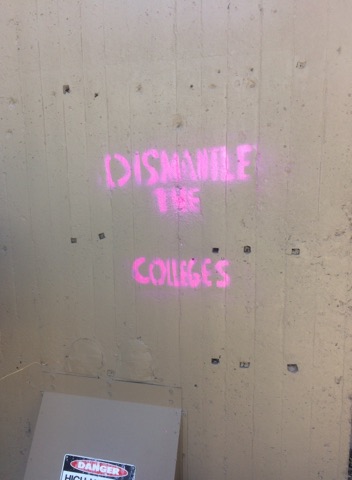 At time of publishing, Wesley College attempted to remove the graffiti by way of high pressure hose. The remaining graffiti has not been removed by campus security and remains visible across campus.