Ejaculating into women’s shampoo bottles, ranking the hottest commencing female students, setting pubic hair on fire, locking first years in a room and throwing dead fish on them; these are just some of the behaviour of college students that the Red Zone report has exposed, inspiring a snap action today at the University.

The report, which catalogues over 200 pages’ worth of hazing and abuse at the University of Sydney’s colleges, was written by Walkley award winning journalist Nina Funnell and PhD candidate and former 2016 SRC Women’s Officer Anna Hush.  Its title, the ‘Red Zone’  refers to the period in which students are most likely to be victims of sexual assault: OWeek. Coinciding with University of Sydney’s OWeek, the report was released to the public Wednesday morning.

Today, the Women’s Collective of University of Sydney has protested the behaviour detailed in the report and are calling for a complete overhaul of the college system.

Around 200 students gathered out the front of the Quad, in the heart of the University of Sydney.

Jessica Syed, 2018 co-Women’s Officer at the SRC, performed acknowledgement of country and recalled the rape and murder of Annette Morgan, whose body was found on St Paul’s oval in 1977, and the response of women activists at the time. She said for as long as sexual violence has existed on campus, women have mobilised to eradicate it. “Why do we still have to protest this?” she asked, stating that she does not believe change will come from the University.

“Colleges are bastions of wealth, elitism and whiteness,” she said to the crowd.

At this point a five metre-long banner, covered all over with the phrase “Red tape won’t cover up rape, welcome to the red zone”, unfurled from a first-floor window overlooking the Quad. 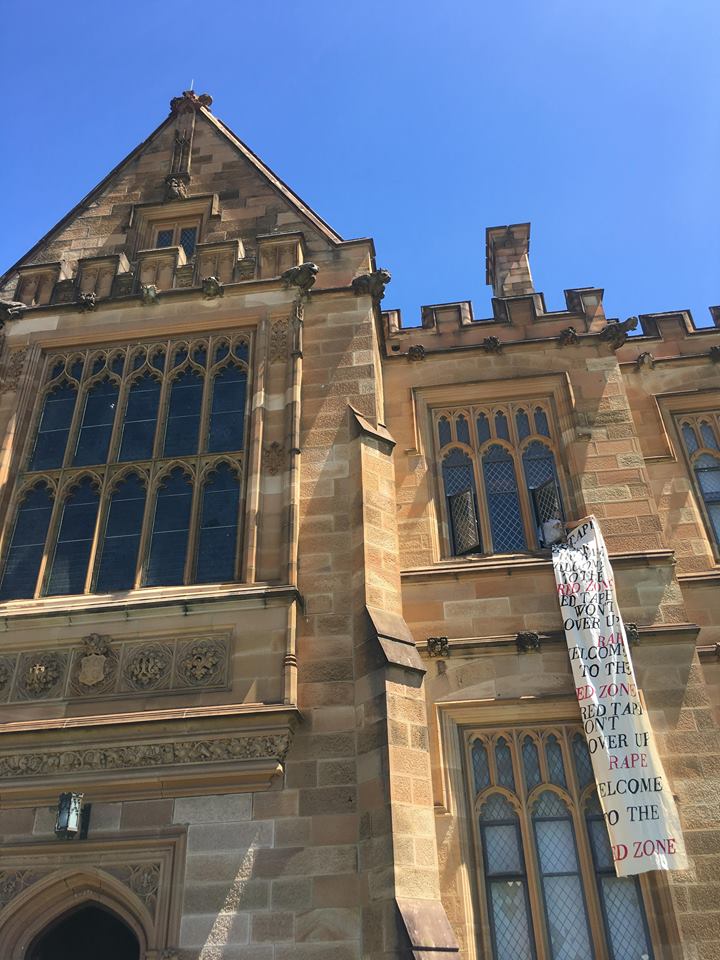 Syed said that the protest would accept nothing less than the recommendations of the Red Zone report.

Anna Hush then spoke, recalling her year as Women’s Officer. She said she had not expected sexual violence to be at the forefront of her year until the floodgates were opened by student journalist, Aparna Balakumar. Balakumar exposed the Wesley College journal that called women “sluts”, “hoes” and “bitches”, ranked women on their attractiveness and contained an infamous infographic known as ‘the Rack Web’, which detailed which college students had slept with each other. Hush recalled the University enlisting Elizabeth Broderick to conduct a review in response to the pressure it was under, and that activists were tentatively pleased with this. However activists were later appalled when the report was released, with key aims not met and the report reading like PR for the colleges. She compared this report to the Red Zone report. She called the colleges “deeply sexist, racist and elitist” and that more than tinkering around the edges will be required to ensure change.

“Sexual violence is engrained in colleges, like asbestos,” Hush called out.

Hush concluded by thanking survivors for their bravery in coming forward.

SRC President Imogen Grant spoke next. “We’ve seen time and time again students have always spoken out against these bastions of privilege; however, it has remained on the bottom of the agenda for university management.” Grant stated that OWeek is one of the most dangerous times for students as sexual assault services receive a spike in calls, and one in eight of all rapes occur during this time.

“Abuse and misogyny is a structural issue that is not going to go away with a shake up of college council,” Grant said citing the recent restructuring of St John’s College in state legislation.

“Nothing will resolve the issues other than shutting them down,” Grant concluded. 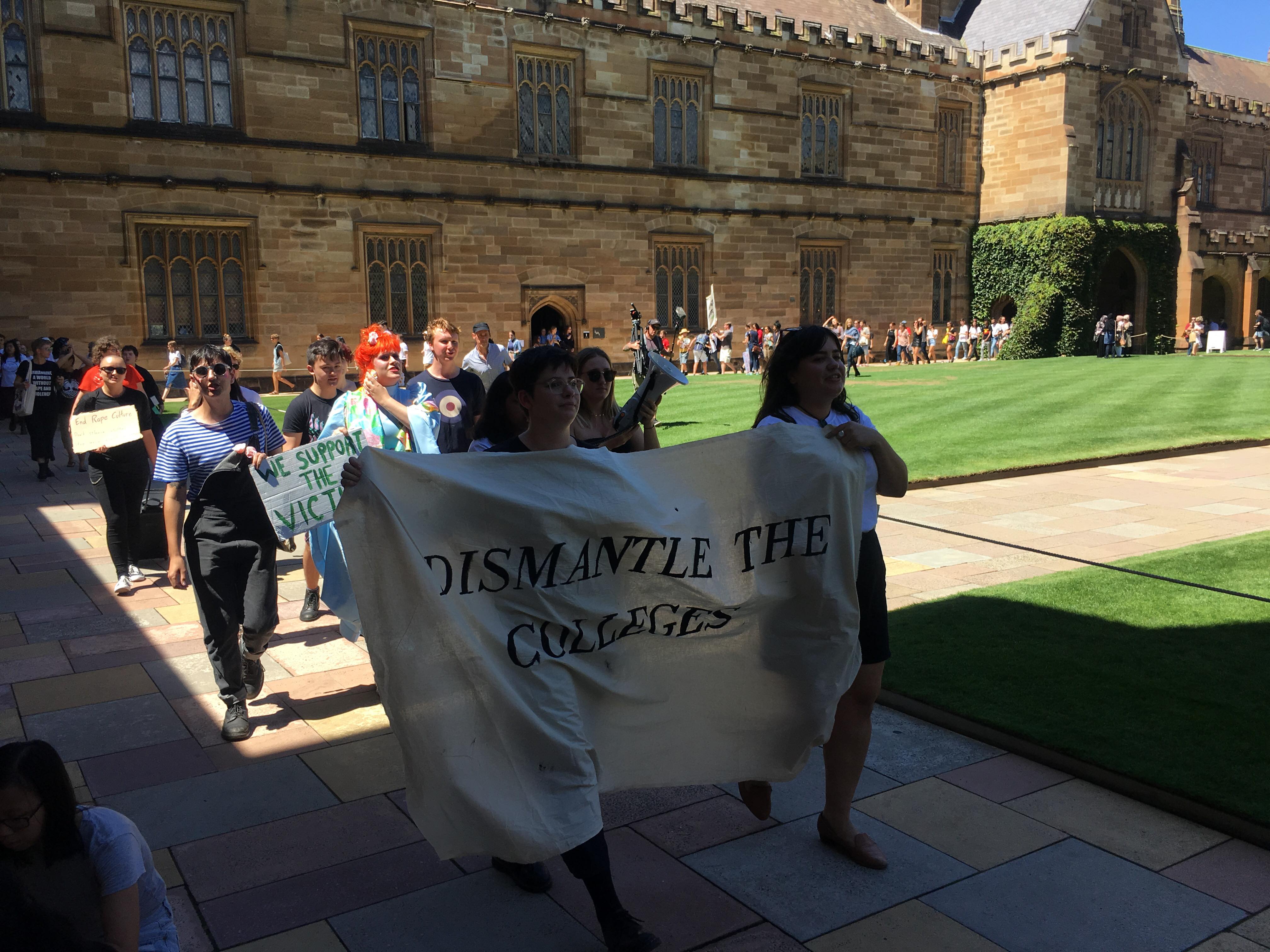 Laura Wilson of the NTEU spoke in solidarity and noted that even after two separate emails from Vice Chancellor Michael Spence, staff had no idea how the University plans to change the appalling culture. She spoke of the NTEU being deeply ashamed of the colleges. Wilson concluded that protest is the “only way we ever achieve change”.

Author of the report, Nina Funnell, spoke briefly. She said she had nothing to say to Spence or the colleges and addressed survivors, saying “I believe you, what happened to you was not okay… and we will continue to fight for an education free of sexual violence as this is no more or no less than you deserve”.

The crowd then chanted “how ever we dress, wherever we go, yes means yes and no means no”. The crowd then marched with banners such as “dismantle the colleges” to Michael Spence’s office and co-Women’s Officer, Maddy Ward called on the Vice Chancellor to face the crowd.

A member of the crowd, Scarlett, took the opportunity to speak out. She spoke out about her experience of gang rape in high school. She said this still affected her during her time at university. She called for Australia to follow the American model, noting that only state or federal oversight could resolve the issues.