At the beginning of Med Revue, Lemony Snicket warned the audience to leave, while the cast danced to ‘Look Away’. For many Med Revues past, this would’ve been good advice, but I’m glad I stayed for Med Revue 2018: A Series of Unfortunate Enemas.

Med Revue is not your regular revue. This year’s cast stood at a whopping 93. There were no auditions. The performers were all first year med students and only three members of this year’s cast had any experience with revues. This inexperience can go horribly wrong—the revue has a reputation for deeply offensive sketches and varies wildly in quality from year to year—but this year was a delightful asset.

Some of the show’s strongest sketches were also the most unconventional: the humour of an entire sketch was based entirely on the alliteration of the letter ‘D’ and dumb butt and dick-based repartee. In another revue, this probably would’ve been cut, but sketches like this established the a goofy sense of humour that defined the rest of the show. The onstage charisma of many actors—Ben Mayer and Benedict Blackett in particular—elevated their sketches. The audience developed empathy for their simple charm and groaned indulgently at self-aware but spectacularly set up puns.

However, this lack of experience cut both ways. A number of premises were frighteningly unoriginal: dracula wants to work at the blood bank, a janitor is caught dancing on stage and doctors put fingers in butts (who knew!). The pacing of the show was often irregular and failed to gain momentum in the second half as the audience got bored of long, under-edited sketches and a number of random transition sketches which fell flat. 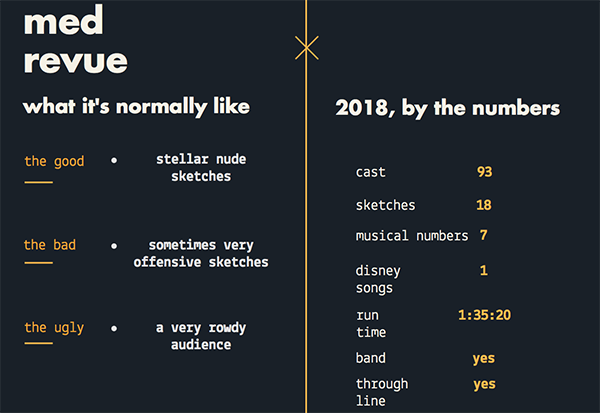 Med Revue attempted an incredibly ambitious number of musical and dance items. The pay out of some of these was incredible—the sultry tableau of scantily-clad bodies at the end of the first half will stay with me and a Bollywood number in the middle of the second half buzzed with a tightly choreographed energy. However many of the songs had too many choruses and dance numbers were uncertain and messy.

The second half opened with a disappointing rendition of ‘Anaemian Rhapsody’, breaking the cardinal rule of ametur choirs: no Queen. The complex melodies were drowned out by booming low harmonies, parts struggled to stay together and the song ended prematurely with a half-hearted band solo. After the heaving energy of the first half, the second act struggled to regain momentum.

Band interludes were frequent but often jarringly short, catchy tunes cut out, leaving audience members bereft in darkness for long moments before the lights come up on the next sketch.

That said, perhaps the best parts of Med Revue were its moments of incredible energy. The audience went wild for a lecturer (who rumour has it was based upon an actual member of faculty) giving a rather physical explanation of dendrites with the help of two very attractive students. The word “invaginate” had us all screaming for more at the end of the sketch. And in a truly masterful directoral call, the lecturer returned towards the end of the show to lead us into Med Revue’s iconic nude sketch.

Med Revue always does things differently. This year’s show was less consistent and polished than your average faculty revue, but its high points were very high indeed.