In Chloé Zhao’s latest film Nomadland, Fern (Frances McDormand) starts a seemingly endless journey through Central America in her van, working seasonal jobs to keep herself afloat after the town that she lived half of her life — a company town, where all residents worked for the state’s largest gypsum company, the United States Gypsum Corporation (USG) — shuts down after the economic recession. The van is her new home, as is the case for other nomads, alienated by the neoliberal economic system.

Nomadland is a tale of the Other that is usually left out from the grand narratives told by the media. In the film, Fern and other nomads find themselves exiled (or exile themselves) from a ‘normal’ life: working a decent 9-5 job, getting paid and living as a middle-class American. In the film, Zhao digs into the underlying politics and economic system that threatens life. Like migratory birds that traverse the landscape for survival, Fern works in Amazon Wrapping Centres during Christmas, camping sites in summer days, and occasionally works at filling stations and mining sites for a minimum wage. The economic recession has both shut down a town and obliterated the savings that nomads like Fern have worked half of their lives to build. Before dwelling in her ‘wheel-estate’, Fern worked as full-time Human Resources manager in USG and in several part-time jobs, realising she could hardly sustain herself when the economic crisis hit.

‘Like the working horse willing to work till death, and then put out to pasture’, the community leader of the nomads — Bob Well (who plays himself in the film and is known for his Youtube Channel CheapRVLiving and the not-for profit Home on Wheels) who Fern encounters on her journey — reminds us of how the neoliberal economic system renders life and work precarious. Precarious work, unstable life, minimum social security — human life becomes particularly vulnerable in the exploitative economic system. The charm of Nomadland shines through in its effort to discuss the politics of otherness and the precariousness we share.

Adapted from Jessica Bruder’s non-fiction book Nomadland, the film features a number of non-professional actors who are real-life nomads. Linda May, one of the leading non-professional actresses in the film, and the friend of the fictional character Fern, worked seasonal minimum wage gigs from beet harvesting to toilet cleaning in camping sites after the 2009 economic recession, with medical costs vaporising her savings. Nomadland offers us insights into the nomad community that is rarely represented in film, without extravagance.

In the film, the nomads live precarious lives, but Zhao does not paint them as vulnerable victims. Fern is a fearless woman, determined, and free-spirited. She tells her old family friends that she is ‘not homeless, just houseless’ and that she is no different from them. While on the road, Fern has the choice to settle down with her life, to have a family and grandchildren, to live in a well-decorated cottage with hectares of farmland. But in every step she takes, Fern distances herself from these seemingly ‘easier’ ways of life. Fern ultimately chooses a life that is always on the road, but is in every way filled with hope — meeting new faces, reunions with old friends, bearing witness to sunsets across America. Fern is exceptionally resilient, poetic and brave. Nomadland avoids the common savior-victim rhetoric, moving away from the idea that sympathy from the audience is the answer to a deeply systemic, political issue. On the contrary, it encourages us to think critically of the common precariousness we share as people living in a neoliberal economic system. 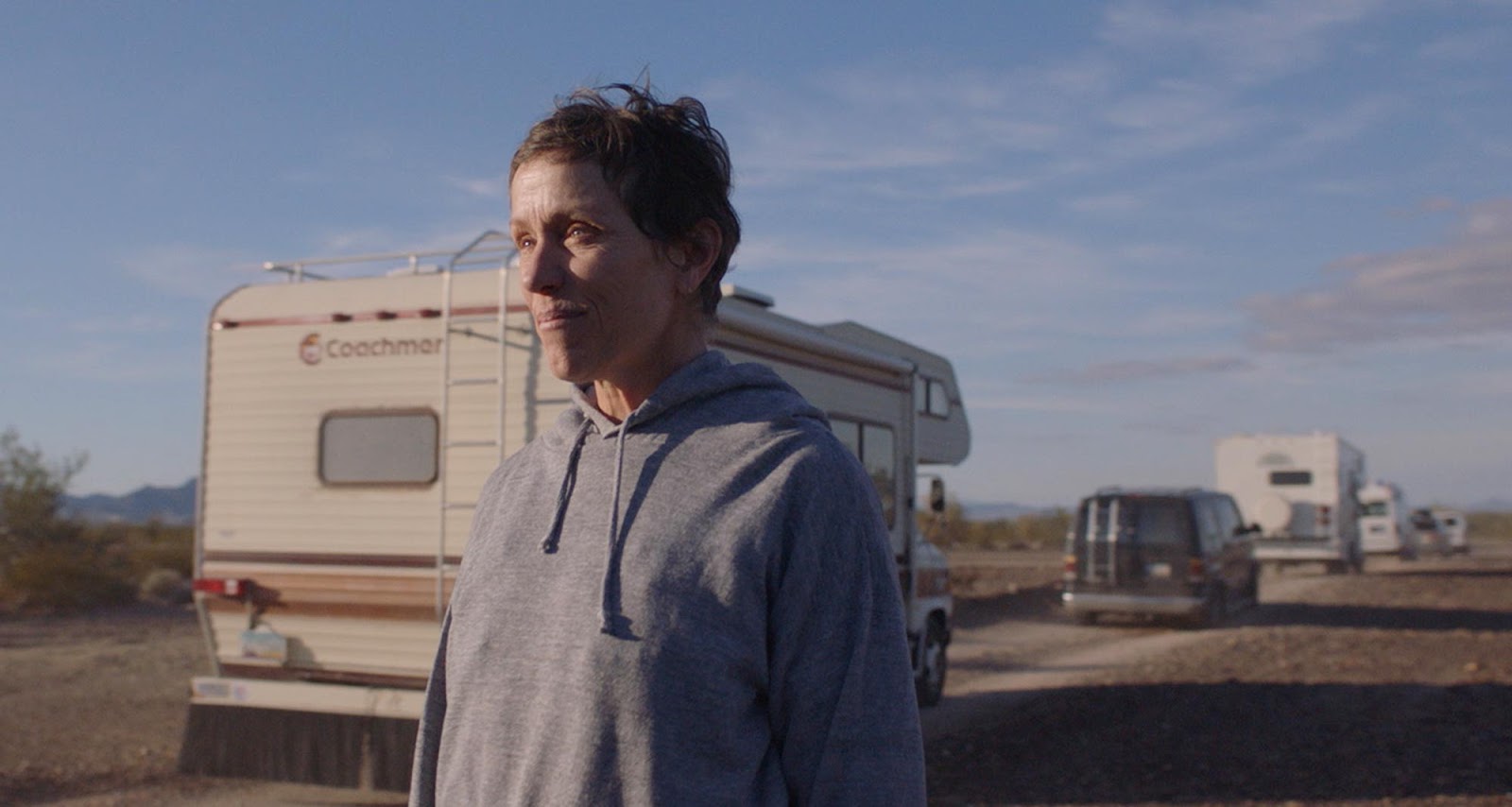 Nomadland is indeed a political film. Its reflection on the neoliberal economic system, precariousness of life and work, make this film particularly extraordinary. Looking closer, the film is strongly influenced by Zhao’s background; born in China, Zhao studied political science during her college years and is now working in North America as a filmmaker. Her film is bold, and her experiences of living across different borders and cultures enables her to understand different kinds of otherness — whether being a migrant, a woman or a nomad otherised by neoliberalism. Instead of emphasising differences, Zhao sheds light on our commonality as humans, even as we acknowledge how women and people of colour continue to fight against systems that historically disadvantage, dehumanise and harm us. Nomadland reminds us of how different kinds of otherness intertwine.