My nonna, the most intelligent person I know, has left me knotted in what can only be described as a mix of confusion and love when she told me that, for a second time, my dead twin sister – her granddaughter Gioia – appeared to her. At the beach. She even showed me the sage leaves she’d ghosted the house with – a Calabrese tradition – to convince me, over my morning coffee, the last one I could sip peacefully before returning to work at the university tomorrow, that she would appear to me while we were together.

A lick of steam wisped out of my coffee as nonna uttered the word ‘amore’, with a hint of excitement unknown to this house for weeks. The coffee’s bitterness chocolates into sweetness, calming the insults, the rebukes of our Calabrese dialect that arrive on my tongue. How my nonna loved words: she always declared herself a poetess – never a poet – but her writing never amounted to anything. It goes that our mother, who died in childbirth, was a writer.

There’s nothing left behind to prove it though. We couldn’t ask our father about her, because he’d left us outside the door of this house once he realised, truly, that he would have to parent the both of us alone. According to nonna, he left us unnamed at the door. In our town, you could get away with not naming the babies for forty days. This was not uncommon. Nonna said we looked angry at the doorstep. But in naming us she thinks she saw our countenances bend into smiles. She called us gemelli zingari. Gypsy twins.

We grew to live in and around nonna’s words, curled inside the thick quilts of her Calabrese dialect, a dialect that when spoken, especially by grandparents, has quite a folkloric way of coaxing children, but grandchildren most of all, into unconditional love and understanding for the crazy – which our nonna was. And she knew it, because she was a zingarella herself.

My grieving – if you can call what this is grieving, this schism of feeling, just five weeks into it – has made me more distracted than normal, a sip of coffee makes its way past my lips by whose hand I don’t know, I see nonna’s mouth circle over ‘amore’, the word

a cloud that, when that final ‘e’ is opened,

that diamonds into a memory,

out of a blue

of sky showering on

my nonna and I

the day my twin, her granddaughter, was buried leaving us

to drink the rain,

the way nonna whispered to me,

“amore, il cielo, la aqua attire! My love, the sky, the water is drawing us!”

but I couldn’t bear to watch the rain

stencil us out of darkness

and crying, I tapped nonna on the shoulder to tell her, to tell her that

“You keep calling me son. I’m your nipote, your grandson. How can you have seen Gioia when you can’t remember who I am to you?”

I’d clearly interrupted her train of thought, because she eyed me quizzically, but she flung my comment away and began again, again repeating the same declaration, repeating amore, amore, Gioia, and, you see, and, you see, here I am in

amore. the word a hall of five

when uttered one way,

another room in language’s house to see, but

it leaves me out in the cold,

where I feel nonna’s words

into a kiss on my cheek,

“Tomassino, dove sei? Where are you?”

I had knocked over my now tepid coffee without realising. As grandmother’s do, she fixed the situation straight away before I could do anything myself.

Tommasino. Only my nonna and Gioia would call me that.

Nonna says she has seen Gioia. She can’t have, but in these moments, when I hear my name said in this way, it seems that my nonna can’t be wrong. She summons Gioia here every time Tommasino is uttered, and in those letters – the straight path of the t, the mountainous incline of the two m’s that lead to the line of horizon that the end of my name brings out of blur, nonna seems to have traversed the most impossible land, and retrieved my sister out of the ocean and brought her here, in this room now, nothing but a dripping body with eyes closed and empty of breath.

That’s how we found her. Wet, dead, with only a cut along her right cheek, a sentence of red sharp as the sunset that bled onto the sea that afternoon. No one knows how she died. She was found on the northeast corner of the beach. There’s a cliff just near where we found her. She could have jumped off. She could have drowned. Maybe her heart couldn’t take it anymore. Maybe an open shell cut her cheek as her face hit the sand.

That’s mainly all I remember. The cut, her body, and my nonna holding her. My nonna has a print of a painting above our dining table, where we sit now, of the Madonna cradling Jesus in their exile, their abandonment, in Egypt. It’s called La Zingarella, and she bought it from an Ethiopian woman who supposedly lurked throughout the town, but I never saw her. The resemblance was agonising.

My nonna’s name is Gioia too, so maybe she is right again, that she has seen my sister everywhere because they are bound by their names, names

create a string of history

with sorrow as time

the pins and needles that wrap,

around my right leg,

blurring my grief into butter knives

into the burning horizon my name

waters into sight as my nonna calls my name,

I took after my nonna for a tendency to faint when I was stressed or overly anxious, both in times of grief and non-grief (time has slipped into these two monoliths for me now). When I woke up, she was beside me. Of course.

My nonna’s poetry was bodily. Back bent over my body. Her hand a comma cupping my cheek. Grey, wiry hair that seemed veined with gold depending where the light followed her head as she moved and spoke. Eyes, wells of honey.

“Amore, I’m sorry. I just need someone to believe me. I don’t want to overwhelm you.”

Nonna struggled with people believing her for what it seems her whole life. One night when Gioia and I were teenagers, she told us that she had eloped in the late 1940’s with an Ethiopian man, Aaron – our grandfather – but we didn’t know that he fled to Italy in fear of being deported to a concentration camp up north somewhere. Nonna fell pregnant with my mother, but her family refused to believe that she was pregnant. She grew too thin. She wasn’t happy enough to be pregnant. At that point she couldn’t cook a quick spaghettata without causing trouble. And having mixed raced children, even after the war, seemed an impossibility. Our grandfather died way before Gioia or I were born, but this story made me into a historian. The voices from my past, echoes within the shell of this nation’s history, demanded respite from their exile. So, I’ve dedicated my life (when I’m not grieving) to remembering. This.

“I know I’m a little pazzo. A little crazy, I am a zingarella Tomassino! Come with me tomorrow to the beach, Gioia will come, I promise. I think because you fainted Gioia didn’t come to visit. Or maybe she just prefers the beach more than my house, but that would be a bit insulting considering how she used to run back home after work for my spaghetti vongole…”
My grandfather supposedly nicknamed my nonna zingarella. He reclaimed the word: my nonna’s parents called her that in a sardonic way, calling her a throwaway thing because of the way she looked at Aaron, the way she cupped her hands over her belly when the ninth month mooned into position. A zingarella is spontaneous, a gypsy, but not necessarily in the pejorative sense. A wanderer. An exile in your own family. The word is a most magnificent prism, describing a person who is crass but beautiful, shining yet demure, sparse yet brimming with life; lines that shouldn’t go together, but do, and form the most beautiful house that my nonna continues to abide in. I don’t remember agreeing to nonna’s request; I had to return to the university tomorrow, but there was something in her voice that ushered me into that house of that word zingarella, where a requirement upon entry was to listen to nonna’s request, and the request underneath that request, that seeing Gioia, and me testifying to it, was the only way for her to keep abiding in life’s embrace. 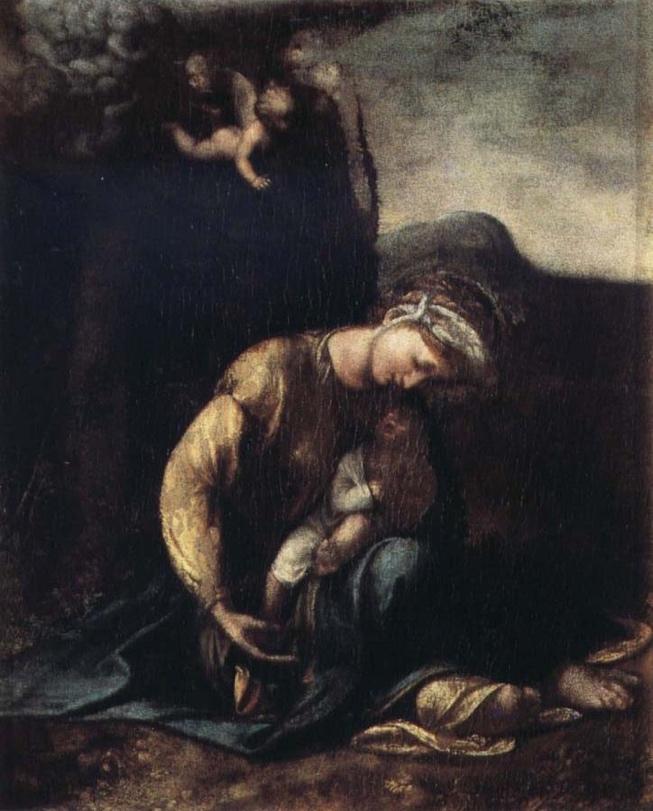 Yesterday, I said that my nonna is intelligent. I don’t think I’ve inherited any of it (Gioia got most of it). But, oddly, I have never believed her intelligence to be as sharp as today.

I did see Gioia – or something of her.

It took a matter of minutes upon entering the beach promenade that a woman appeared, a woman who I had never seen before, wearing an olive-green dress and a gold necklace, surrounded by Persian carpets lined with self-portraits. It turns out that on the main easel was a portrait of a woman that was Gioia. Our same hair, a wash of black, our same lips. The same red cut on her cheek that we found her with on the beach. But nonna said: when I saw Gioia she didn’t have that cut, but maybe it healed since I saw her last.

I told her that this was just a portrait, and that she’d tricked me. She said no, amore, it is Gioia.

The determination in her voice burned my unbelief to

but I didn’t tell her that.

my sideward glance at Gioia

gave her everything she needed, bringing me here. Here.

She didn’t buy the portrait though. She went home empty, I on the bus to the University of Calabria. That afternoon after work the question slipped out.

“Why didn’t you buy the portrait?”

“Why do I need the portrait? Amore, she’ll visit me again, I know she will. If what I named you, i miei gemelli zingari – my gypsy twins – is true, I’ll see her, and you will too.”

She went up from her chair to boil pasta. Taking off her apron, she shook it twice. The dust motes that were flung out into their air, against the black of her pantry, hung, just for a moment: burning stars pearling the night sky. She re-tied the apron around her and watched the water bubble. Her head hung over the stove.

“You begged me to come with you yesterday. What’s wrong?”

I placed my hand on her shoulder, and in that touch

but nonna holding gioia in her arms, dead

and not even the sky

could hold our beauty,

each of its three layers of flame

shines, even as breath

to alleviate its burning,

This piece was an entry in the 2022 Honi Soit Writing Competition.